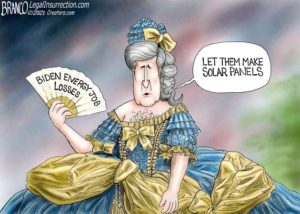 Welcome back to Day 24 of the Occupation in the formerly United States of America! What’s the latest to get dished out from the party of Love and Unity? Here’s a start:

2/4 – EXCLUSIVE: FBI Visited Home of Trump Supporter Who Was Working in DC, But Did Not Even Attend the Rally

Expect more of this. Remember, these people truly hate us.

If the previous story is concerning, this one will raise your blood pressure.

Thankfully a refi we did a few years ago got our mortgage out of B of A. Now it’s time to find another bank for my checking and end this relationship I’ve had for over 20 years.

2/6 – The Only Exhibit Trump Needs For The Senate Impeachment

I’m sure that you’ve already read about how The Radical Left is now openly bragging about how they stole the 2020 election. This post is a bit longer and goes into more detail.

As bad as things are here, I’m grateful that I don’t live in Canada. If you want to see their various governments’ abuses check out the great reporting that Rebel News is doing.

Yep, my decision to ignore the Super Bowl and get my fooball fix by dusting off some Madden ’93 & Super Tecmo Bowl on my SNES after Litttle Bob went to bed was the right one. Of course I took the Eagles in both to relive Lord Randall the Great on the O side of the ball and Gang Green on the D. And not that you were wondering, but on the Madden side I lost to Dallas, 7-0. Of course, I hadn’t played that game in years, and his only score was a BS pick-6. Tecmo went better, pasting Phoenix 64-0. And on the other TVs I had McNabb era in demo mode going on the Game Cube while the Vick era Eagles were on the TV that hosted the Wii. Despite how this paragraph may sound, I miss the NFL a lot less than I thought I would.

Remember when watching the Super Bowl commercials where advertisers put more effort into entertaining us than sneering at us? It feels like an eternity. And I wasn’t alone in not watching them. The game’s viewership dropped from roughly 102 million to 92 million. Yes, that would be 10 million & a 10 percent drop. While those numbers are not NBA bad, I never thought I’d see a day where I’d get more enjoyment from hearing about how the Super Bowl tanked as opposed to actually enjoying the game & the commercials. Welcome to 2021!

More of this. The one positive of The Radical Left having a near monopoly of every aspect of power in this country is that it leaves them with a lot of soft targets. In the battle of David and Goliath this is a mosquito bite, but it’s spreading the word and hopefully inspiring bigger and more effective ways to attack.

More acedemic than most posts you’ll see here, but the last section at the end of this relatively short post brings it home.

Good comparisons to other cultures that have gone down this road in this post. Every day we slip closer to turning Kurt Schlicter’s novels about America splitting from fiction into prophesy.

This is along the lines of the NYT Twitter app post. I thought I’d heard about something a while back about Qanon (or some other underground group) combing through Link

edIn for any resumes that had CNN in them and then trawling through their social media feeds. A great way to keep the Radical Left from attacking is to force them to defend. Or in the words of the great Sinsei Lawrence, “The best defense is… more offense.”

Aaaand this will be the straw breaking the camel’s back that launches a fight between me & Sister Babe over cancelling Disney + now that our one year free trial is over.

“Damn, I never thought I’d say I’d rather have Europe’s problems than ours right now.”

“Alex, I’ll take things that I never imagined any American would ever say for $400”

Remember the actions of teachers’ unions the next time they try to play the “we care about your children” card as they are seeking more money. They don’t care about anyone but themselves. https://t.co/LJJ1MeURZv Private schools are open at far higher rates. @JillFilipovic

To avoid a fascist regime, they turned DC into a military zone, dissent is stifled as treason, laws are quickly made by executive order, and journalists submit to a Ministry of Truth. https://t.co/SLaYrtSVEm

Brother Bob is no longer on Facebook (although you can see his archives there), and is winding down his presence on Twitter, but is ramping up on Minds and Gab, will be there whenever Parler gets back on its feet, and has his biggest presence on MeWe.

2/4 – EXCLUSIVE: FBI Visited Home of Trump Supporter Who Was Working in DC, But Did Not Even Attend the Rally

The Democrats only ALMOST have absolute power. Wait till they have complete power and have eradicated the prospect of ever having another fair election.

For some reason, these guys getting COVID is not the kind of concern that gets them released. I didn’t know Judge Freisler had so many kids that lived in the US and served as judges.

Maybe they should change their name to Bank of Amerika. Oh, the ACLU is going to be SOOOOO on their ass!!

2/6 – The Only Exhibit Trump Needs For The Senate Impeachment

Isn’t it wild how often the left just comes right out and admits their corruption, then turns around and denies any corruption exists?

Give them an inch and they’ll screw you to the wall.

I bet Mark Cuban wouldn’t think of refusing to play that, whatever the hell it is. It appears as the idiot Biden unites us, we grow more separated. That could be the only Cowboy victory this year.

The reason the ad and every other half-hearted, half-assed, insincere call for “unity” by the left is that everyone understands the left destroyed unity and until they stop dividing, there will be no unity. On another note, don’t you think Bruce could have offered an obligatory “Oh, by the way…” before he did a car commercial? Had the left not made such a sickening spectacle of praising this hypocrisy as a work of art, his drunk driving issue would have gone unnoticed. And, I too completely ignored the Stupor Bowl.

The only use I have for the NYT is to go on their Facebook page and give them a healthy dose of what they doled out for the past 4 years. I’m not on Twitter, so they are automatically blocked there. It is amazing the lack of knowledge encountered there.

I think it’s pretty clear that liberals have a very limited understand how work, labor, investment, production and profit works. As they operate government, they feel you can waste 80% of the money and simply tax or print more. Just like in the Obama catastrophe, the idiot Biden knows he will be destroying good jobs and won’t be allowing any new ones to be created, so artificially inflating low-end wages is there only solution. They neither know nor care about the adverse effects.

It is difficult to determine if, as with there total ignorance of how business works, they think turning the finest military in the world into a taffy-assed social club or they just want to destroy the nation’s capability to defend itself. I wonder if any government idiots consider the downside of persecuting and kicking out of the military a bunch of well trained fighters and injecting them into an already divided society? Nah… I guess not.

Funny how the left has that knack for proving the point those that oppose their intolerance are making.

Europe is one of the most racist, bigoted places. Of course, it is much older than the US and their biases go much further back and has been entrenched through countless wars, large and small. The “racist” US is far more inclusive. But, that doesn’t promote the racist liberal agenda. Personally, I love discussing an immigrant’s culture and experiences with them.

@kitt: I really want to see this get done to other media outlets and watch teh heads start to explode. I barely use Twitter naymore but did it on general principle

they think turning the finest military in the world into a taffy-assed social club or they just want to destroy the nation’s capability to defend itself.