COVID 19 is the risk Fauci said was “worth taking” 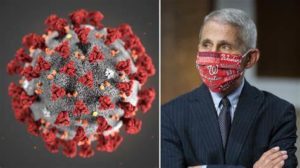 I’ve been sitting on this post for a long time. Anthony Fauci has some explaining to do. A lot.

People on the left tend to get bent when someone properly refers to COVID 19 as the “Wuhan” or “China” virus. The fact is, it is did originate in China. There’s really no doubt that it originated in a lab. Dr. Anthony Fauci has said this virus might never disappear because it is so contagious

“I do not believe it would disappear because it is such a highly transmissible virus. It’s unlikely it is going to disappear.”

How did it get that way?

COVID 19 is a Corona virus, related to the common cold and flu viruses. It is a relative of the SARS 2 virus from 2003. So why would this particular virus be more pathogenic and transmissible and possibly not disappear?

Because of something called “Gain of Function”

Certain gain-of-function studies with the potential to enhance the pathogenicity or transmissibility of potential pandemic pathogens (PPPs) have raised biosafety and biosecurity concerns, including the potential dual use risks associated with the misuse of the information or products resulting from such research.

On October 16, 2014, the White House Office of Science and Technology Policy announced the launch of the U.S. Government (USG) gain-of-function (GOF) deliberative process to re-evaluate the potential risks and benefits associated with certain GOF experiments.  During this process the USG paused the release of federal funding for GOF studies anticipated to enhance the pathogenicity or transmissibility among mammals by respiratory droplets of influenza, MERS, or SARS viruses.

“Gain-of-function” is the euphemism for biological research aimed at increasing the virulence and lethality of pathogens and viruses. GoF research is government funded; its focus is on enhancing the pathogens’ ability to infect different species and to increase their deadly impact as airborne pathogens and viruses. Ostensibly, GoF research is conducted for biodefense purposes.  These experiments, however, are extremely dangerous. Those deadly science-enhanced pathogens can, and do escape into the community where they infect and kill people. What’s more, this line of research can be used for biological warfare.

This research is so dangerous that even Vox wanted it stopped.

GoF research was halted in 2014

Prompted by controversy over dangerous research and recent laboratory accidents, the White House announced Friday that it would temporarily halt all new funding for experiments that seek to study certain infectious agents by making them more dangerous.

It also encouraged scientists involved in such research on the influenza, SARS and MERS viruses to voluntarily pause their work while its risks were reassessed.

Opponents of this type of research, called gain of function — for example, attempts to create a more contagious version of the lethal H5N1 avian influenza to learn which mutations made it that way — were elated.

“Brilliant!” said Peter Hale, the executive director of the Foundation for Vaccine Research, which opposes such experiments. “The government has finally seen the light. This is what we have all been waiting for and campaigning for. I shall sleep better tonight.”

The moratorium is only on research on influenza virus and the coronaviruses that cause SARS and MERS. It made no mention of Ebola or any related filovirus. Ebola is already extremely lethal, but it is not easily transmissible.

The debate over the wisdom of “gain of function” research erupted in 2011 when the labs of Ron Fouchier of Erasmus University in the Netherlands, and Yoshihiro Kawaoka of the University of Wisconsin-Madison, separately announced that they had succeeded in making the lethal H5N1 avian flu easily transmissible between ferrets, which are a model for human susceptibility to flu.

Today, the National Institutes of Health announced that it is lifting a funding pause dating back to October 2014 on gain-of-function (GOF) experiments involving influenza, SARS, and MERS viruses. GOF research is important in helping us identify, understand, and develop strategies and effective countermeasures against rapidly evolving pathogens that pose a threat to public health.

One does not develop counter measures by increasing transmissibility and pathogenicity.

Wuhan was not a suitable lab for handling these dangerous viruses and we were warned.

A lab that researches bat coronaviruses in Wuhan, China had come under scrutiny by US officials two years before the current global outbreak, a report said Thursday.

Diplomats sent two “sensitive but unclassified” cables to Washington in 2018, sounding the alarm about the Wuhan Institute of Virology and asking for assistance to help the lab tighten its safety protocols, the Washington Post reported.

“The cable was a warning shot,” a US official told the paper. “They were begging people to pay attention to what was going on.”

One of the cables warned that the lab’s work on bat coronaviruses and their potential human transmission represented a risk of a new SARS-like pandemic.

The GoF work was funded in part by the NIAID- Fauci’s organization.

But just last year, the National Institute for Allergy and Infectious Diseases, the organization led by Dr. Fauci, funded scientists at the Wuhan Institute of Virology and other institutions for work on gain-of-function research on bat coronaviruses.

Many scientists have criticized gain of function research, which involves manipulating viruses in the lab to explore their potential for infecting humans, because it creates a risk of starting a pandemic from accidental release.

Dr. Fauci did not respond to Newsweek’s requests for comment.

The project was canceled on April 24. The rest is history.

China lied about everything from day one.

A research dossier compiled by the so-called “Five Eyes” intelligence alliance states that China intentionally hid or destroyed evidence of the coronavirus outbreak, leading to the loss of tens of thousands of lives around the world

The 15-page document from the intelligence agencies of the U.S., Canada, the U.K., Australia and New Zealand, was obtained by Australia’s Saturday Telegraph newspaper and states that China’s secrecy amounted to an “assault on international transparency.”

The dossier touches on themes that have been discussed in media reports about the outbreak of the virus, including an initial denial by China that the virus could be transmitted between humans, the silencing or “disappearing” of doctors who tried to speak up, the destruction of evidence in laboratories and refusal to provide live samples to international scientists working on a vaccine.

Three days later, on Jan. 3, China’s National Health Commission ordered virus samples to be either moved to designated testing facilities or destroyed, while simultaneously issuing a “no-publication order” related to the disease.

They refused US assistance

Despite rising numbers in both coronavirus infections and fatalities, China has refused offers of assistance from two of the world’s foremost agencies on infectious disease, according to The New York Times. The Centers for Disease Control and Prevention has been offering to send a team of experts from its Epidemic Intelligence Service for more than a month to no avail. And the World Health Organization has also met resistance to travel to Wuhan, where the outbreak started. Some top diplomats told the Times that they fear that China does not want to appear to be unable to handle the growing problem alone. The CDC said it hoped that by observing the medical conditions, it could improve an American response to any threat of a widespread outbreak in the U.S. Secretary of Health and Human Services Alex Azar told a news conference on Friday that it was out of his hands. “It’s up to the Chinese,” he said. “We continue to expect fully that President Xi will accept our offer. We’re ready and willing and able to go.”

I do not believe this pandemic was an accident. Had China been honest about this virus or the outbreak, it might be believable.  As we have previous noted, China’s “response” was to seal off Wuhan from the rest of China but not seal off Wuhan from the rest of the world. That spelled “intention” to me. We could debate whether the virus was released intentionally or not but once it was released China made sure it was spread as far and wide as possible.

That’s how we got where we are. But what you most likely don’t know is that Fauci was behind the push for this virus. I thought it was very curious when he said that in 2017 he knew there would be an outbreak

“Anthony S. Fauci, MD, director of the National Institute of Allergy and Infectious Diseases, said there is ‘no doubt’ Donald J. Trump will be confronted with a surprise infectious disease outbreak during his presidency,” reads a July 10 Facebook post of a screenshot from an article.

Now let’s hit the Wayback Machine for a ride back to 2011. COVID 19 is one those viruses Fauci said was “worth the risk.” It appeared in the Washington Post and is reproduced here

Back in 2011 the inadvertent release of an engineered virus was a real possibility.

But they weren’t looking for an Achilles heel. They were looking to make these viruses more lethal. That is what “Gain of Function” does. 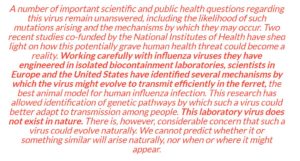 News outlets have been ridiculing the notion that COVID 19 was created in lab but it is highly likely it was. Now let’s revisit something from 2017 again

Today, the National Institutes of Health announced that it is lifting a funding pause dating back to October 2014 on gain-of-function (GOF) experiments involving influenza, SARS, and MERS viruses.

“This laboratory virus does not exist in nature.”

IMO this is a laboratory created virus that was part of the Gain of Function study. Anthony Fauci and his NIAID were behind much of the funding for this nightmare. They were instrumental in making the virus happen.

2011: Fauci says Gain of Function is a risk worth taking

2014: This work so dangerous the Obama administration stops it

2019: It happens and China makes certain it is as widespread through the world as is possible.

That risk no longer appears worth taking. Fauci has a lot of explaining to do.