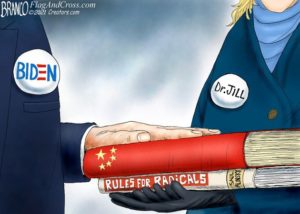 Welcome back to Day 10 of the Biden* Occupation! On a programming note, you’ll see a slight shift in the content. I’ll probably be going heavier on the links at the start of the week (which I’ve previously admitted mostly come fro The Pirate’s Cove’s Sorta Blogless Sunday Pinup), you’re going to see fewer tweets at the end as I transition away from the Bigs. I’m on the biggest alternative social media sites (links at the end of this & every post), and am looking for suggestions as to what’s best to drop at the end of my posts to replace Twitter.
Onward!

While there’s nothing I can add to this headline, the final paragraph in this very short post perfectly sums up 2021.

I’m now realizing that cancelling my roughly 10 year subscription to National Review wasn’t enough. Time to adopt The Radical Left’s tactic of pestering them and their sponsors on social media. The Leftists are bad enough- the Vichy Republicans are exponentially worse.

Am I the only one who’s reminsicing about the good old days of two weeks ago when the press was shrieking about foreign governments controlling our president?

Short but sweet – series of tweets regarding Biden’s* Inauguration

According to The Radical Left, yes they can

1/24 – When it comes to oligarchs, there’s one socialist idea I strongly support

When you see a headline as insane as this, you know it has to come from a site as smart as The Bookworm. Have fun arguing against it.

Left unasked is the obvious next step – how do us Normals respond to The Radical Left’s tactics?

1/26 – The Left Keeps Accusing Conservatives Of “The Big Lie” – A Term Invented By Hitler As He Prepared To Persecute German Jews.

The Lefties do love behaving like the National Socialist Worker’s Party, so why not quote them?

The next time a Lefty tries blowing off us Normals giving a Slippery Slope warning, remind them that 20 years ago the people who said that gay marriage would lead to normalizing pedophelia were dismissed as cranks.

Oh FFS, NFL. Can you try any harder to push away us Normals? Nobody even remotely interested in your game has any interest in hearing any poetry, much less some nti-American screed before the game. But if you truly needed to go the poetry route, a better bet would have been The Machoman’s brother.

Have a great weekend, fellow Subjects!

Biden told 50,000 union workers to learn to code on his first week in office.

Biden told 50,000 union workers to learn to code on his first week in office.

Another funny:
A bunch of lonely Dorito devouring reddit virgins are about to topple wallstreet elites, I bet with the 600 bucks each congress stimulated them with.

Joe has no ideas. The idiot Biden does what the little guy in his earpiece tells him to do. Biden can appreciate Levine being something he is not. After all…

The Democrats and the Republican Democrats cared about one thing and one thing only; get rid of Trump and get back to the status quo of making deals that made politicians rich and piles the debt upon the US taxpayer.

The idiot Biden poses a severe national security risk if his action controlling earpiece was hacked and someone told him to do stupid things like open our borders, destroy tens of thousands of jobs and wreck our energy industry…

… or allow the most unscrupulous people on the planet to have access to our energy infrastructure. Oh… wait.

Maybe Democrats can begin predicting the insurgency will hit in 12 years unless we give them absolute power. That’s usually the existential time span of their baseless fear-tactic predictions.

Anyone that opposes left wing extremism are extremists.

1/24 – When it comes to oligarchs, there’s one socialist idea I strongly support

Somehow, we need to turn the Democrats against the oligarchs. THEN they would consider reining them in.

Honest question: Democrats DO know that the charging stations themselves are not the source of electricity. Right? They can walk back all the “tax talk” they want. But the simple truth is taxes are going WAY UP and energy costs will “necessarily skyrocket”. The wealthy might be able to absorb it, if there’s not too much other taxes to absorb. But the not-so-wealthy, as they always are, will be HAMMERED. But, there’s always moving to crowded cities where there is mass transit. And rampant disease spread. And out of control violence and crime. And MASSIVE taxes. And concentrated Democrat incompetence. Remember Obama’s $865 billion “stimulus” with those shovel ready jobs that was going to rebuild infrastructure? Yeah… good times.

Well, in the first place, Democrats in power don’t actually believe any of the crap they slung at Trump, so there was no “moral” requirement to win at any cost. Their sole motivation was to destroy Trump before he destroyed their corrupt environment and, thus, them. Lust for power, an existential necessity in this case, was what drove them to employ massive, widespread fraud, so much of it that it could not possibly be kept hidden.

1/26 – The Left Keeps Accusing Conservatives Of “The Big Lie” – A Term Invented By Hitler As He Prepared To Persecute German Jews.

It is impossible for Republicans to use “The Big Lie”. The media calls them on everything they say, even the truth. Only the Democrats… the Demediacrats… can employ the Big Lie.

I think what Goebbels said was something like, “If you repeat a lie often enough, it becomes the truth.” Which Democrats also do.

And these are the people who employ “fact checkers” to catch others lying.

By ending “transgender discrimination”, what they mean is allowing transgenders to designate anything they want as a “right” and force everyone else to comply. What if my orientation is to money? Does that give me a protect right to rob banks?

If it denigrates the country, it’s good. I guess that applies to poetry as well. She could read this at the Super Bowl:

There once was a guy from Delaware,
Who showed the country he didn’t care.
Not about the poor
Or what working is for
But destroyed the country to make it “fair”.

By ending “transgender discrimination”, what they mean is allowing transgenders to designate anything they want as a “right” and force everyone else to comply. What if my orientation is to money? Does that give me a protect right to rob banks?

If any fool tries playing the pronoun game with me I’ll make them abide by mine. I’ll also assume they haven’t never seen Heartbreak Ridge and won’t know what to make of my preferred pronouns:
The Earl of Funk
The Duke of Cool
The Ayatollah of Rock N Rolla!

There once was a guy from Delaware,

I cringe every time I get me alumni newsletter and they trumpet his degree from U of D. Really devalues my own degree. Of course it could be worse – my Econ degree could have come from Boston U, which Gulag Babrie has rendered valueless for any grads from there

@Brother Bob: BREAKING: Black Lives Matter movement, linked to 91% of the riots across America in the Summer of 2020, nominated for Nobel peace prize.