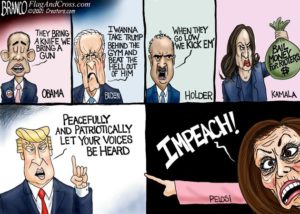 Welcome back to Year Zero and Day 3 of the Occupation in the Formerly United States of America! A few nights ago I was doing some chores while looking for something cool to watch that I’d seen before to run in the background, and dialed up the pilot episode of Firefly on Hulu. Is it just me, or did the battle during the first six minutes of the episode feel like a metaphor for the 2020 election? I think that at some point over the last two months every one of us Normals had that moment where we fely like Malcolm Reynolds looking up at the sky at the end. What have the first few days of the Biden* presidency given us? Well, for starters:

1/15 – DID THE DEMOCRATS STEAL THE PRESIDENTIAL ELECTION?

Expect more of this unpersoning. And this is only the beginning

1/16 – “If You Need All This To Protect Your Inauguration from the People, Maybe the F-ing People Didn’t F-ing Elect You!” – DC Worker Shows Video of Military Checkpoints in City (VIDEO)

Rare link to Gaetway Pundit. I’ve reached the point where unless absolutely necessary I don’t ever want to go back into downtown DC and see what these authoritarians have done to destroy this city that I once loved.

1/17 – About the resemblance of Biden’s DC with Hunger Games and payback.

1/18 – WHY CONSERVATIVES SHOULD BOYCOTT LOEWS HOTELS

In one of my links not too long ago in the comments section someoen dropped a site to help find ways to avoid funneling money to Leftists via corporations. I can’t find the link now, but does anyone know of any sites that compile these lists?

Mark Steyn had a great quote some years ago along the lines of, “The message here is that there are those who govern and those who are governed. Make sure you understand which one you are.”

1/20 – Liz Cheney’s Congressional Career Appears to Be Over

Not the most important story of teh moment, but thisstory makes the cut for this brilliant quote:

One doesn’t know whether Cheney just wanted to go out of Congress with a bang; or if she seriously misread the tenor of the GOP both nationally and at home and thought this “maverick” vote was her ticket to more power; or, if being true to her heritage, she couldn’t resist getting involved in a war with no victory conditions and no way out.

Well, that honeymoon of Lefties not hating Law Enforcement and our Military was a short one.

ICYMI – I celebrate my suspension that led to me shutting down my Facebook page with Hello Dad – I’m in Facebook Jail!

Have a great weekend, Fellow Subjects!

The best headline of 2021 by far, @stephenkruiserhttps://t.co/z2kFvuJ7zy

The best headline of 2021 by far, @stephenkruiserhttps://t.co/z2kFvuJ7zy

You hate to see it, and by that I of course mean CNN at the airporthttps://t.co/ibJdjbRnJK