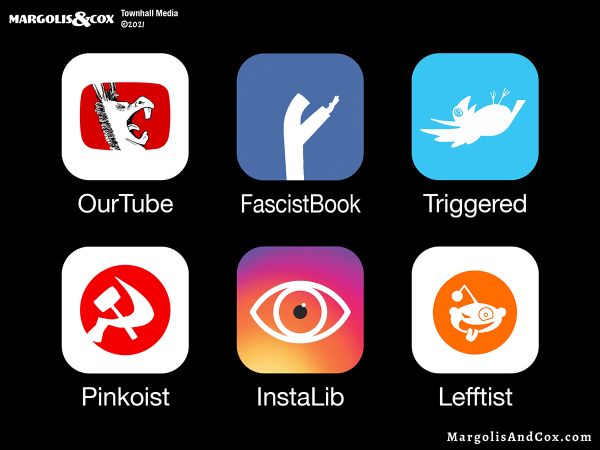 If the name of this post sounds familiar to you, you might be a Gen Xer. It’s derived from the title of a song by the 80s Alternative band “Was (Not Was)”. Or if you’re like me and your musical taste went more towards metal and you didn’t really know the alt scene, you would know this song from the great coming of age Christian Slater movie, Pump Up the Volume. Here at Chateau D’ Bob, the song is an annual running joke, specifically the line that says, “Hi Dad; happy birthday! I’m in jail!” Little Bob and I recently celebrated birthdays, and since his birthday is the day before mine, I like to joke that shortly after Midnight on Little Bob’s 18th birthday I’ll be getting a phone call quoting that song. But of course, aside from explaining the post’s title, this rambling first paragraph has little to do with the actual subject matter. Longtime readers will appreciate that for once I’ll get straight to the point.

On November 5, I posted a number of links to my Facebook page (linked at the bottom of this post, not that it matters at this point) discussing some, er, ah, “irregularities” in Michigan on election night. Both got the perfunctury “Partly false information. Checked by Independent fact checkers” that so many of us have seen since for the last few months. But a few hours after the second one was flagged, I was informed that I was put on a 30 day suspension from posting or commenting on FB. If you’re reading this you don’t need any more background on social media suppression or suspensions over facts. 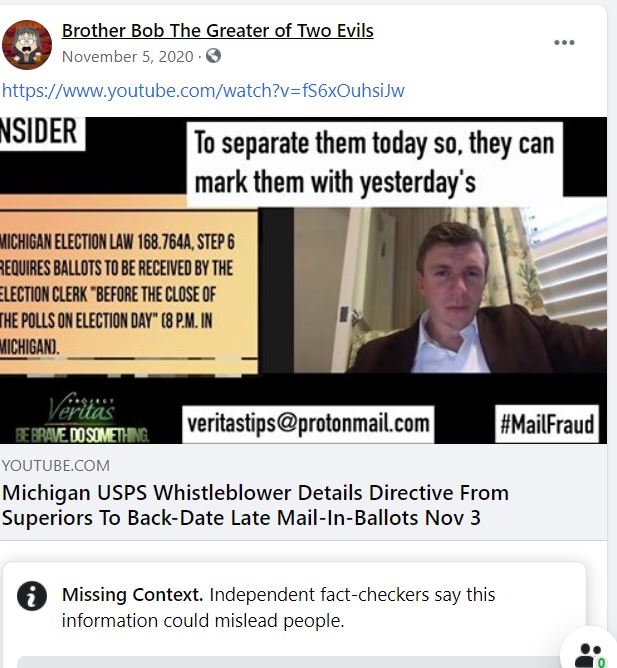 Needless to say, I was pretty annoyed. Beyond the suppression angle, I unfortunately use FB for boards that I use to fight to get Little Bob back to a safe return to school and out of the soul draining virtual learning he’s been trapped in for nearly a ear. I couldn’t post or comment on them either. This made it personal. 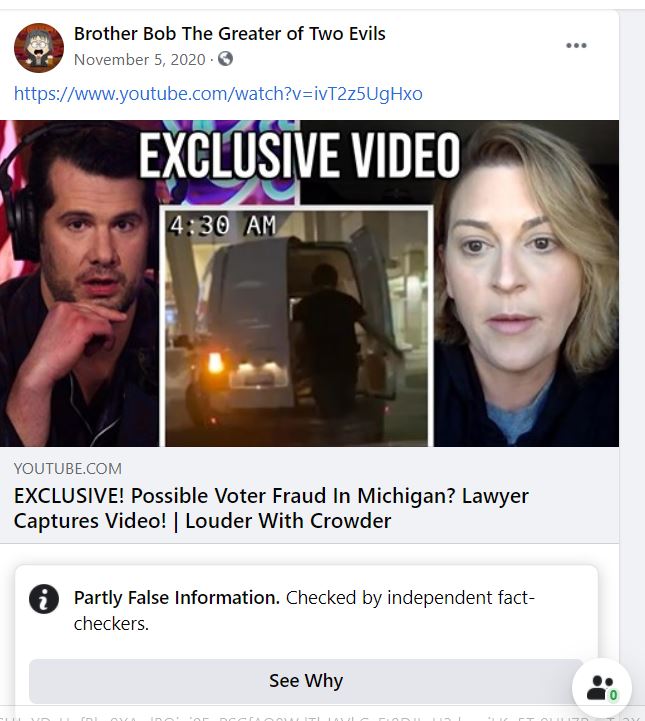 Yes, these two posts were the offensive material that got me suspended by FB. And in one of the most Orwellian twists of 2020, fact checking the fact check censors also became prohibited speech. So naturally I clicked the button to learn why. 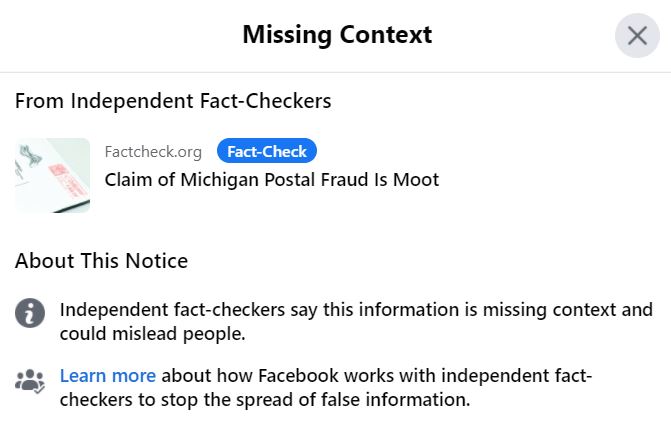 Yes, the question is moot. Yes, Facebook had to take that one moment in his life when Jesse Jackson was more cool than obnoxious when he appeared on Saturday Night Live (back when it was funny) and tarnish the best line of his life, “The question is moot”.  Sure, it was sneering political crud, but back then when it wasn’t a constant firehose it could work. It didn’t hurt that the skit was actually funny. But back on point, when I clicked through to actually appeal, I was told that I could ask for a review 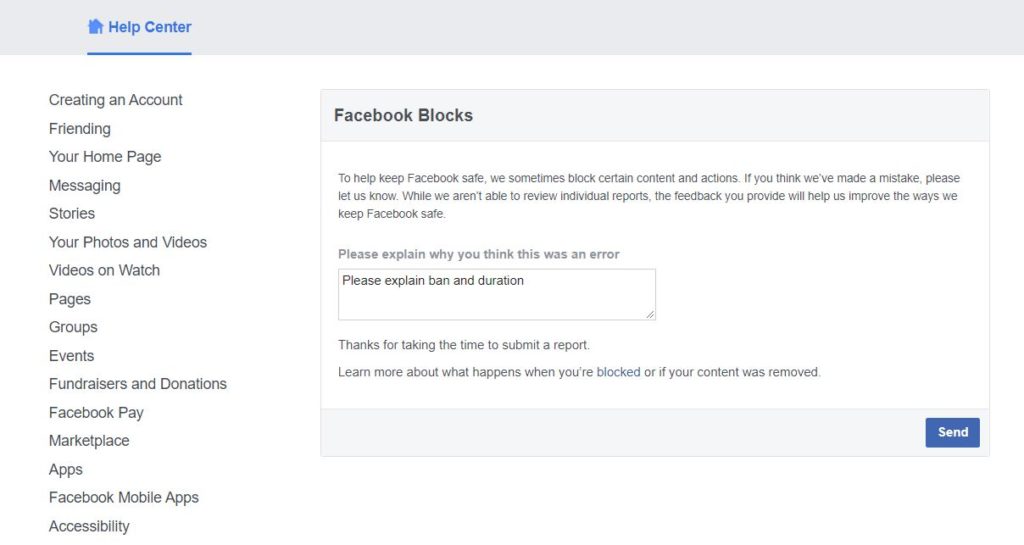 Which gave me this dopey response, and a non-working button to submit my appeal. So I was among God only knows how many were locked out of participating in the public forum at the time of a crisis that may become the most pivitol moment in our nation’s history since the shots fired on Fort Sumter. Oh, and that “Fact Check”?  I clicked through to read the article in question, and to save you the trouble of a click, it basically “debunked” the claims by simply interviewing all of the people who might have been complicit and accepting their reassurances that they did nothing wrong. I’m not kidding – that was their evidence. And it’s not just Conservatives that FB has targeted. Even a left of center group like Brandon Straka’s #WalkAway movement was deemed ideologically impure – and purged.

So what now? If you’ve looked at Brother Bob’s (not my personal page that I shut down two years ago) page, you’ll notice that since getting out of FB jail I’ve only made one post. And that was only a test to figure out the exact day I’d been released – it was a Babylon Bee article mocking Gulag Barbie. That was back on 12/6, and it was my final post on “Brother Bob the Greater of Two Evils” page. Until this one, as this post will serve as Brother Bob’s formal departure from Facebook. F*** Zuck. F*** you and all of your damned censors. F*** your hypocrisy. I’ve come to realize that posting to your platform only provides you with free content that can help to boost your viewership and revenue that you’ve used to tear this country apart. Not any more.

In a way I should thank you, as you’ve forced me to take a hard look at my digital presence and forced me to harden my digital life. I’ve been migrating to various non Big Media platforms, and am looking at other means to protect myself, such as shifting my email accounts to Proton Mail and looking into buying a cell phone whose platform isn’t owned by one of the Big 3. And in the words of the immortal Eric Cartman, “Screw you guys; I’m going home.”

Oh, and one more thing. One of the ways I’d promote my blog posts would be to drop them on various conservative pages on Facebook. Prior to my departure I noticed some… changes among them. I won’t list the ones that seem to have been left intact, but here are the ones that I know were affected. If you know anyone from them or current status please chime in in the comments:

The Ace of Spades Moron Lifestyle Group – Still running, but migrating to Parler

The American Patriot – There are a few pages bearing this name on FB, and the one of which I was a member disappeared

Andrew Beitbart – King of the New Media – Not sure what’s happening here, but a usually actve page has been quiet since 1/6

Breitbart – Looks OK, but I notice it’s now only posts from the Breitbart web site

Breitbart News – When I went on suspension it had a restriction on posting until late December. The page is now gone

The Constitutional Vanguard – I didn’t often look at the pages where I’d post unless I was responding to a comment. It looks like my posts were almost all of the page’s traffic, and it’s run by the now hysterical Never Trumper that writes over at Patterico.

Drain the Swamp – There used to be two pages I followed bearing this name. Now only one appears, and the other’s pinned post notes how they’ve been cencored and are on borrowed time. I also know that at least one has migrated to MeWe.

Fight Club – Conservative Resistance III% – Purged prior to my suspension

Hardcore Deplorables: Trump 2020 – Disappeared some time after my suspension

III% United Patriots – Purged prior to my suspension

Liberalism Is a Mental Disorder – There were two FB groups bearing this name where I’d post. Both disappeared after my suspension

#Maga Nationwide – Disappeared some time after my suspension

Patriots for Trump – Disappeared some time after my suspension

Patriot Lives Matter – Purged prior to my suspension

The Patriot Network – Disappeared some time after my suspension

Patriots Only – Disappeared some time after my suspension

Snowflake’s Safe Space & Buttercup Ranch – Purged prior to my suspension

Tea Party – Disappeared some time after my suspension

As much as one hates to invoke Godwin’s Law, someone on Twitter beat me to it and compared this to a digital version of the National Socialist Workers’ Party kicking Jews out of their homes and to ghettoes where they could be more easily exterminated. After seeing what happened on these sites and with Parler the comparison isn’t wrong. And this is why I’m getting out now. .