Pence’s Dilemma: Option A or Option B 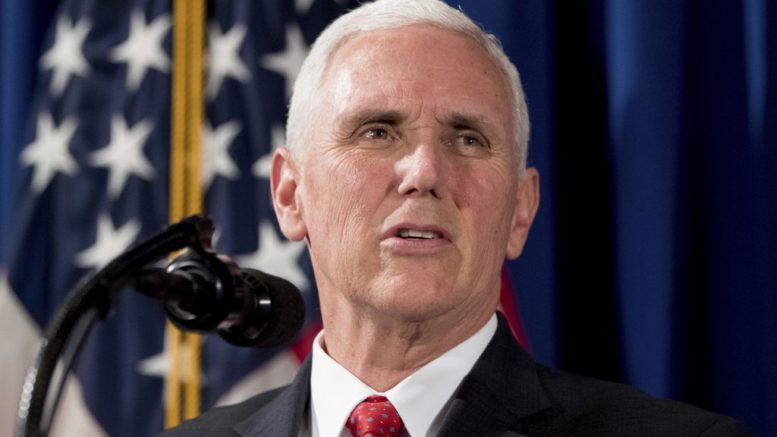 As I reflect back on my life it is interesting to remember how many times I came to a crossroads and had to make a difficult life choice. I feel like Lt. Colonel Frank Slade in Scent of a Woman when he contemplated facing the crossroads in his life.  He said, “I always knew what the right path was. Without exception.  I knew.  But I never took it.  You know why?  It was too damn hard.” I think that all of us can relate to his observation. Sometimes in life we just waffle.

Other groups this year also came to a crossroad and were faced with a difficult choice after the corrupted presidential election.  The FBI should have been all over the obvious fraud like flies on a rib-roast. Instead, the FBI channeled Sergeant Schultz (“I see nothing”) on the TV show, Hogan’s Heroes and ignored the preponderance of evidence of wide scale voter fraud.  We see no semi-truck transporting pallets of Biden ballots to Pennsylvania.  We see no corrupt ballot stuffing in Georgia. We see no planes landing in Arizona delivering Biden ballots and we definitely do not see any witnesses anywhere, who are willing to step forward to document voter fraud.  Actually, I am terribly disappointed in the FBI.  Once upon a time, that organization was the gold standard for law enforcement and was revered around the world.  I am so proud of the men and women who sacrificed their lives to create such an impressive and valuable juggernaut.  Unfortunately, things change and the FBI is now suspected of having gone over to the dark side.

The second group that approached crossroads after the fraudulent election was the Supreme Court.  They also decided to play the Sergeant Schultz card (“I hear nothing”) and seven of them said, we don’t even want to listen to Ted Cruz enumerate all of the evidence about election fraud.  Three Supremes who metaphorically shoved a knife in America’s back and deserve special recognition are Barret, Kavanaugh and Gorsuch.  We desperately needed them to stand up for justice.  I think that’s even stated in their job description.  Their betrayal hurt the most.

A third group that approached the crossroads were the whiny, wimpy, cowardly Republicans in Congress who should have backed Trump. They collectively should have been outraged about the blatant election fraud and screamed, from the rooftops, Churchill’s promise to his country.  “Victory at all costs, victory in spite of all terror, victory however long and hard the road may be; for without victory, there is no survival.”  Instead they yawned, said “whatever” and whispered to each other, “Trump, Biden, Harris, who cares who is president. We always get paid.  We get paid during the pandemic, we get perks, we only have to work 165 days a year and we’ll throw the peasants a lousy $600 of their own money from our limo windows to shut them up. The Republicans even staged a flash mob in the U.S. Capital rotunda to welcome their new master Biden.  They sang, “Biden, Biden, he’s our man, if he can’t do it, then Kamala can.” Okay, I made that up but the Republicans’ in Congress have sadly morphed into a squishy smack of spineless jelly fish.

Now we come to Mike Pence.  In the movie The Rundown, The Rock (Dwayne Johnson) is a “retrieval expert” who specializes in finding people who live off the grid and really do not want to be found.  The Rock is very skilled and when he locates his quarry, he generously offers him to choose either Option A or Option B.  Option A is the easy way and Option B is the hard way.

Mike Pence, on January 6, 2021 will also come to a crossroads when he addresses a joint session of Congress to formally count the electoral votes for president and vice president.  Pence will be forced to choose either Option A or Option B.  Option A is the easy choice-stick a metaphorical knife in Trump’s back, welcome Biden as the new president and then get on a plane to Bahrain.  Bingo, bango, bongo, it’s that easy and probably what everyone expects to transpire.  However, Pence should consider the other consequences of choosing Option A. Not only will he betray Trump (“et tu Pence?”) but he will also stick a knife in the back of 74 million Trump supporters scattered across this great country. This group is extremely angry that the election was stolen.  They do not forgive and will never forget the treachery of the Democratic Party. Pence must also consider a second consequence of choosing Option A.  It is rumored that Pence harbors his own presidential ambitions.  While Pence is enjoying the amenities of first class travel to Bahrain, do you honestly believe that 74 million trump supporters will forget his treachery and sing “Hail to the Chief” when he returns?

Pence should pick Option B, which is the much harder choice.  He will be hailed as a hero if he addresses the joint session of Congress and rails loudly against the evil travesty of justice that transpired in the 2020 presidential election. He should angrily excoriate the states that embarrassed themselves and our nation by allowing fraudulent elections to occur on their watch. He could then quote a Vice President of the United States who postulated that, “Corruption is a cancer: A cancer that eats away at a citizens’ faith in Democracy, diminishes the instinct for innovation and creativity.”  Joe Biden was spot on and knows that his “election” was corrupted by evil people with personal agendas who plan to destroy this great nation. Now is the time for Pence to fulfill his destiny.  Could Pence be the catalyst to challenge timid Republicans in a call for action?  Maybe he could channel Rocky Balboa who said:

Let me tell you something you already know.  The world ain’t all sunshine and rainbows. It’s a very mean and nasty place and I don’t care how tough you are, it will beat you to your knees and keep you there if you let it. But it ain’t how hard you hit, it’s about how hard you can get hit and keep moving forward.  How much you can take and keep moving forward.  That’s how winning is done.

The despicable, cheating Democrats have beaten us to our knees in this election.  They have hit us hard.  Maybe it’s time that we get off of our knees and hit them back.