The raping of America passing for COVID relief. 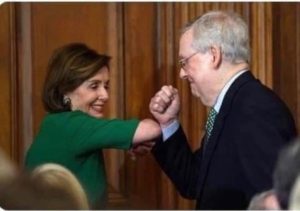 This latest “stimulus” bill coming out of Congress is a total POS. This country has waited nine damn months so Pakistan could get $10 million for gender programs. The list is nauseating

As part of the more than 5,590-page spending bill, the deal provides the country of Jordan with “up to $500,000,000” in taxpayer money “to provide assistance to the Government of Jordan to support the armed forces of Jordan and to enhance security along its borders.”

We are told this is a “COVID Relief” bill. That’s f**king ridiculous. Nine months have passed since the last “relief” bill. In that time, Congressional members have been paid more than $100,000 each. In the mean time, restaurants and businesses have been ordered shut down, but those a**holes in Congress continue to be paid no matter what.

Both parties are utterly contemptible for forcing this garbage down our throats, but let’s take a second to remember what happened.

democrats have blocked a relief bill for months.

“Democrats walked away from that deal because they wanted $2.2 trillion,” Tapper said.

“That’s right!” Sanders (I-Vt.) responded, confirming it was Democrats, not Republicans, who were to blame for months of inaction.

“They walked away from $1.8 trillion, was that a mistake?” Tapper asked.

“Here was a proposal much, much larger. Democrats said, ‘No, that’s not good enough,’” he continued.

Donald Trump twice asked for a standalone relief bill- back in October.

President Trump took to Twitter Wednesday morning to reiterate to House Speaker Nancy Pelosi his desire to sign a standalone bill to provide $1,200 stimulus checks to Americans — as the federal government remains locked in a stalemate over coronavirus relief negotiations.

Just 10 hours after first mentioning Pelosi (D-Calif.) in a tweet Tuesday evening, when he expressed interest in a focused relief deal that would just cover the checks, the commander-in-chief circled back.

“Move Fast, I Am Waiting To Sign!” Trump wrote in a retweet of his earlier message, tagging the California Democrat’s account.

“If I am sent a Stand Alone Bill for Stimulus Checks ($1,200), they will go out to our great people IMMEDIATELY. I am ready to sign right now. Are you listening Nancy?” the president wrote late Tuesday in his initial post on the matter.

In addition, Pelosi said she has no qualms about rejecting the Trump administration’s offer before the election that was more than double the $900 billion proposal gaining steam in Congress that lawmakers now hope to pass.

“That was not a mistake, it was a decision, and it has taken us to a place where we can do the right thing without other, shall we say, considerations in the legislation that we don’t want,” Pelosi expounded. “The fact is, I’m very proud of where we are.”

The political reality is that while Democrats held firm at $2.2 trillion in the runup to the election, and Senate Republicans refused to budge above $500 billion, the Trump administration’s highest offer of $1.9 trillion was just $300 billion short.

Not every democrat was pleased

“We should’ve taken the deal. We should’ve done the deal, 100 percent we should have. I said it at the time,” Congressman Josh Gottheimer (D-N.J.), a leader of the bipartisan Problem Solvers Caucus, told Newsweek last month. “It’s outrageous that we didn’t. I think it was really foolish… I wish we could get that deal today.”

“That is a total game changer: a new president and a vaccine,” the California Democrat told reporters on Friday.

She didn’t want Trump to have a pre-election victory and is going to credit Biden for the vaccines.

Listen to this a**hole ramble

Catch this load of manure spilling out of her mouth

Republicans repeatedly refused to say what amount the President wanted for direct checks. At last, the President has agreed to $2,000 — Democrats are ready to bring this to the Floor this week by unanimous consent. Let’s do it! https://t.co/Th4sztrpLV

Her sheer audacity and condescension is staggering

Pelosi is a flaming arrogant jackass liar. She lies non-stop. Thing is, she lies because she knows the fools who vote for her are going to believe anything she says. She lies because the MFM won’t challenge her lies. But she alone is not to blame. McConnell is to blame for this. Everyone who voted for this POS is to blame. This is not a bill for COVID relief.  It’s crony relief. This is a bill to help stuff the pockets of Congress and its pals. Americans are at the bottom of this food chain.

We are giving $4,728,500,000 to 9 random countries while we suffer at home. We could have given $100K to 47,285 low wage American workers and changed their lives and everyone around them forever. Think about that.

The size of the bill is $900 billion. 328 million times $600 = 196.8 billion. That’s less than $200 billion for direct American relief. More than $700 billion is for pet projects, illegals and domestic and foreign pork. You should spit in the faces of any Congressperson you see because they’re sh*tting on you.

Trump will have none of this.

I have friends tell me that Trump only thinks of himself to which I routinely call BS.  Right now he’s one of the very few in DC who give a damn about you. The rest of Congress is stimulating itself.

This legislation is atrocious but $600 can buy a few pints of Pelosi’s elite ice cream.