Biden’s America. This is what they mean by healing and uniting. 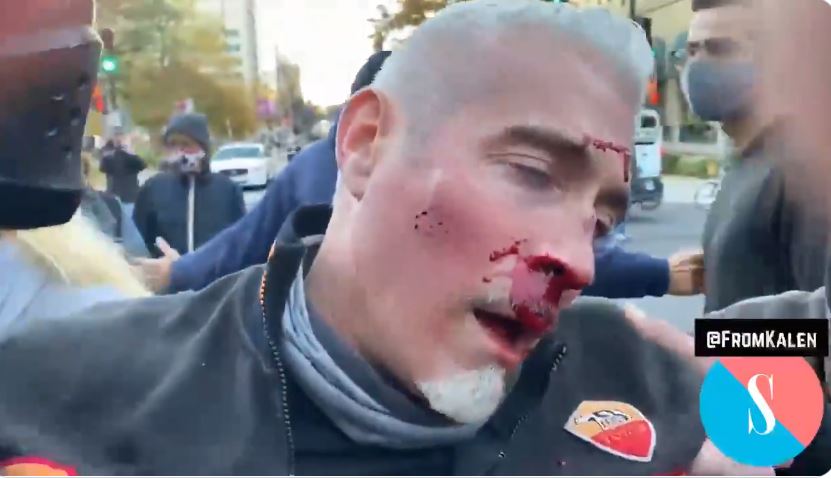 We’ve heard a lot about healing and unity recently. If you thought democrats meant any of that you’d be be sorely mistaken. When democrats speak of healing, they mean nothing. When they speak of unity, they mean you must surrender to their demands or you will be punished.

This weekend Trump supporters took to the streets and rallied in favor of their President. It wasn’t well received by Antifa and BLM Biden supporters who were not going to allow it.

BLM-antifa rioters hurl projectiles and an explosive at people having dinner after the #MillionMAGAMarch in DC. pic.twitter.com/syDM7YQFrS

Here a young couple is terrorized

Never forget what they do to us. pic.twitter.com/iZhZ31pyvO

Is this the “unity” @JoeBiden spoke of that the left is advocating for? pic.twitter.com/TpmtR9DebU

BLM-antifa thugs are running around and beating people on the streets in DC. Video by @VenturaReport: pic.twitter.com/GzV5HRN3So

DC: Antifa and BLM physically assault a Trump Supporter by macing him and beating him over the head with a flag pole pic.twitter.com/FG63zpe7Tl

BLM-antifa assault older man trying to leave the area after the #MillionMAGAMarch. pic.twitter.com/S26myo9bgk

BLM rioter rushes in and punches a woman in the back of the head as she’s walking away. #MillionMAGAMarch pic.twitter.com/1lrfD4MLxW

Amusingly, this is how AOL portrayed this one sided violence:

The writers’ names are ASHRAF KHALIL and KEVIN FREKING and they are contemptibly dishonest.

Freaking dishonest, to coin a phrase.

Not one democrat has disavowed or condemned this behavior. Biden is silent. Harris is silent. This is their America.

One is tempted to call these things animals, but animals behave better than this. This is scum- cheap shot artists who strike and run away, intimidating families and children, terrorizing restaurant patrons. They are emboldened by numbers and are singly cowards. This must make democrats proud.

Not one left wing media outlet accurately reported it. Not one. There is no free and objective press any longer.

They need to be crushed. Utterly destroyed. Unfortunately, that is what it’s going to take. You can bet your life that once Trump supporters strike back it will be reported as them being responsible for the violence.