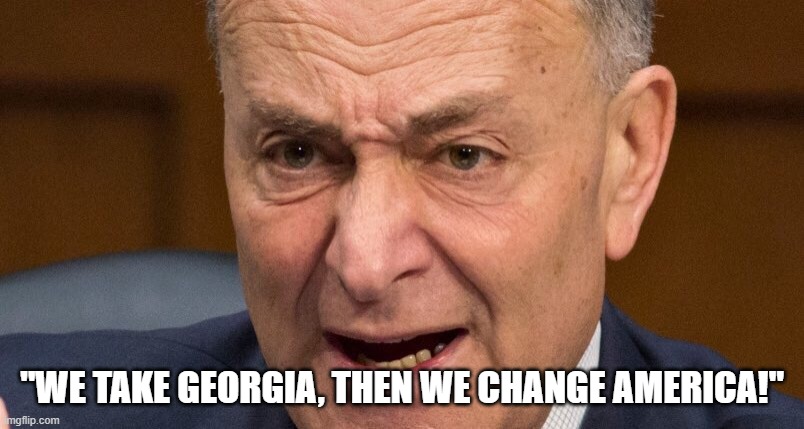 Should the Senate fall to the democrats, this country is finished as you know it now. Biden, as you know, is a doddering old man who can’t find his shoes in the morning and will be told what to say and do and it’s not pretty.

First, retribution. They’re making a list and checking it twice.

Now dems are calling for “unity.” Translation: Do what we demand or die.

Elections will be rigged forever. Meet Biden’s Chief of Staff:

.@voxdotcom That's because they are.

Under Biden, “legal votes” will be racist.

Klain also famously said that they got everything wrong during H1N1.

Oncologist Dr. Zeke Emanuel, one of 10 advisory board members named to Democratic President-elect Joe Biden’s coronavirus task force, has pushed the U.S. and other countries to not hoard a coronavirus vaccine.

Emanuel, who served as a key architect of the Affordable Care Act under the Obama administration, co-authored a paper in September in which he encouraged officials to follow the “Fair Priority Model,” which calls for a “fair international distribution of vaccine,” rather than what he and his co-authors characterized as “vaccine nationalism.”

Biden would have us rejoin the Paris Accord

The Paris Accord sucked.

Pulling us out of this bad deal is good news. As it was negotiated under the prior administration, this agreement imposed a goal of reducing U.S. carbon emissions by nearly 30 percent over a decade. The so-called “Obama pledge” accompanied a host of related federal regulations that would have damaged the economy, killed jobs, and driven up energy prices for families across the country.

Sticking with the deal could have cost 2.7 million lost jobs by 2025, according to a National Economic Research Associates study. And the effects would be widespread, including a loss of 440,000 manufacturing jobs, according to NERA’s numbers. Meanwhile, according to proponents’ own data, the agreement would have no discernible effect on global temperatures.

And the longer the agreement ran, the worse it would get, according to NERA’s data. By 2040, production (and thus employment) would be decimated in a host of industries, including a 38 percent cut in iron and steel, 31 percent in natural gas, and 86 percent for coal. At that point, the total economic cost to the U.S. would approach $3 trillion in lost gross domestic product and 6.5 million industrial jobs.

China and India were obligated for nothing.

Speaking last week, Trump correctly noted that the damage is not spread evenly across the globe, noting that China and India can proceed with adding coal-fired capacity well into the future. “The agreement doesn’t eliminate coal jobs, it just transfers those jobs out of America and the United States and ships them to foreign countries,” he noted.

Under Biden the borders would be blown open:

Throughout the campaign, Biden was forthright about his plans to dismantle Trump’s immigration and border security agenda. His team is now planning to carry out those plans, including a 100-day moratorium on deportations, directives to curtail arrests of illegal immigrants, and a full restoration of the Obama-era Deferred Action for Childhood Arrivals program, or DACA.

This would mean an invasion of the US by economic dependents. This is also a bonanza for drug smugglers and child traffickers. More the 60,000 Americans die every year from opiate overdose. That could be expected to rise dramatically.

Biden has promised to do away with the travel ban aimed at countries who export terrorism. You might have noticed a decline in terrorism over the last few years. Biden plans to reverse that.

Obama and Biden paid Iran $400 million in cash and then paid them interest. It was basically ransom paid to the Mullahs to put off the construction of a nuclear weapon and release some hostages. They plan on securing a nuclear weapon despite the agreement and have been in violation of the agreement virtually since day one. Biden plans to expand on the stupidity. For more, see here.

The Iran agreement was designed to allow Iran to have a nuclear bomb by the end of the second term of obama’s successor.

This is a guaranteed action no matter what that jerk Joe Manchin says.

The bottom line– with nothing but rigged elections in the future and a Supreme Court packed with left wing whackos joined by policies meant to install socialism democracy dies. The left gleefully plots a totalitarian state. As Schumer said, “we take Georgia, then we change America.” We’re already part way there. There is no longer a free and objective press. We can look to the US becoming a hybrid of South Africa and Venezuela.

Please have a look at this video.

I said this the other day somewhere. We are missing the bigger picture as to the loss of ort country.

While all you state is true, no one mentions this fact.

Cheating or real, 54% or more of the electorate voted for a hard left Socialist leaning clown and worse, the woman who could end up being President is a die hard Communist and worse a racist who as attorney General in Cal. withheld evidence to enhance her conviction rates. Pure fact.

Think of it. Half this country is in bed with the very ideology our forefathers fought against, yet it is completely ignored as the underlying problem in this country.

I can’t even give a Moron alert on this one! it’s just completely unforgivable

Reviving the idiotic agreement with Iran will be an end to the peace initiatives in the Middle East. None of those countries Trump was bringing together will trust a United States that allows Iran to play them for a fool, as they shouldn’t. Obama presented the world naivete and Biden will show utter stupidity.

People like Biden is why the wall needs to be finished. Corrupt politicians can opt to not enforce immigration laws, but the wall is there until torn down. Democrats were successful in blocking its start and, thus, its completion, so they still have an open border and more millions of illegal immigrants to flood into our country. We can now see the Democrat utter disregard for citizens’ safety return as a federal policy instead of just the policy of Democrat sanctuary cities.

Pray the Senate remains in Republican hands long enough for the Democrats to lose the House and, ultimately, the White House again. Better, Trump’s challenges result in a factual resolution of the election, resulting in his reelection.