The Cannonball Run Shows how much we’ve Lost as Americans 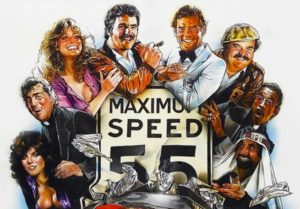 On a whim I decided to re-watch the 1981 classic film, The Cannonball Run (TCR) for the first time in decades. Although I remembered very little of it, I also recalled it being one of my favorite movies from my youth. A sad part of growing up is watching movies you loved as a kid and realizing that they just don’t pass the test of time. That would not be the case here, as the movie was every bit as funny and awseome as I remember it! If you’ve never seen TCR or it’s been so long that you don’t remember it go and watch it now, It’s free to “rent” on Netflix DVD, or you can pay a few bucks through various streaming services. If you’re not sure which ones it’s on, if you have a Roku you can use it’s Search feature to find where it’s available. One last note before I dive in – the movie is nearly 40 years old, so if you haven’t seen it yet don’t get mad at me over any spoilers.

Burt Reynolds was the prototypical 70s man’s man (Yes, TCR was released in ’81, but the 1st 2-3 years of any decade are mostly a product of the previous one) that could never exist today. He could play the tough guy roles easily, such as in Deliverance (the movie that made Ned Beatty famous for reasons he wished didn’t), Sharkey’s Machine, and The Longest Yard, among others. He also had a great comedic side as seen in his iconic role in Smokey and the Bandit, which also features Jackie Gleason in hos most memorable since Ralph Kramden as the unforgettable Sheriff Beauford T. Justice. I’ve also watched Smokey fairly recently as well, and while most people (including me) will argue that Smokey is the better movie, for pure fun it’s tough to top TCR. The Cannonball Run is an actual unsanctioned race that has been going on for years, and was naturally popularized when this movie was released. In TCR the race starts in hotel that appears to be either in NY or NJ, and ends in LA.

The movie opens with a car chase that runs through the credits, and we meet Reynolds and Dom DeLouise. The two play off each other brilliantly through the entire movie, and in the first few scenes where we see them they’re trying to figure out the best vehicle to drive for the next race. At one point they’re in a small prop plane that Reynolds is flying. He empies a can of Bud, throws it over his shoulder and nonchalantly points out that they’re out of beer. So they simply land the plane in the middle of the street in a small town, obliviously carrying on their conversation as terrified residents scurry out of the way, DeLouise zips into a store to grab a six pack, and just like that they take off again. For starters, imagine trying to make a scene like this today – drinking and flying, landing in a town so casually? As the story sends them to the hotel where the Cannonballers are staying and having their launch gathering, we get introduced to a few of the other more colorful teams. I won’t run down all of them, but here are a few notables:

A young Jackie Chan and his scientest partner are the Japanese team driving an advanced, completely computerized car. Of course, they play up a few sterotypes to form

Terry Bradshaw and Mel Tillis are a pair of redneck stock car racers, keeping plenty of Budweiser stocked up for the drive while playing up humor around Mel Tillis’ real life stuttering problem (And yes, unlike Biden’s “stutter”, Tillis’ is real)

Two hotties in spandex outfits drive a Lambroghini and avoid speeding tickets by flirting with the officers who pull them over. Of course, when it finally fails it’s because they get pulled over by a lady cop who’s hotter than them

And if Burt Reynolds was the King of the 70s, Farah Fawcett was the Queen. Of course, she is in this film as a somewhat flighty nature lover.

At the hotel, in addition to Fawcett, we are also introduced to a minor antagonist, a prudish scold from Washington DC named Arthur J Foyt. Yes, AJ Foyt. At a talk where praise is given for restricting electric toothbrush use during peak hours and a ban on colored toilet paper, Foyt goes on to point out that the ultimate enemy of the planet is… the automobile.

Again, I’m not going to summarize the entire movie. The race goes generally how you would expect, and the laughs continue as the race is told through the chapters of the various drivers. Since getting the DVD in the mail a few days ago this movie has been playing on the TV to the extent that Little Bob usually does with whatever his favorite show is at the moment. He’s just old enough to enjoy the slapstick humor that the Cannonballers pull off, and thankfully the suggestive scenes are just rated PG enough to gloss over. And for those of you who remember the movie, he has not been in the room for Jackie Chan’s VCR of “Behind the Green Door” scene.

Imagine trying to make this movie today. While drinking and driving is nothing to sneeze at, you’d never see it joked about to the extent that it was in TCR. You had some racial humor, Jamie Farr playing up wealthy Arab sterotypes, cool dudes, hot women, and everyone having fun driving fast across the country. Of course, in today’s version AJ Foyt would be the hero of the movie, and probably be an LGBQWERTY-Islamic nonwhite character. At a stop near St. Loius we meet a sheriff whose re-election banner hanging across traffic reads, “Re-Elect Sean ‘Kill a Commie’ O’Scanlon: Guns and Guts to keep us safe from Hippie nuts” – His character arc would probably end with rioters destroying his town, and O’Scanlon being sent to a re-education camp where he eventuallay redeems himself by resigning and coming out as Trans. And that would not be as in a black Trans-Am.

After watching the movie again for the first time in ages, as much as I enjoyed it it also left me kind of sad. The movie, and more importantly the attitude, is mostly gone from America today. When did we stop being fun? When did having fun by acting crude and stupid morph to where so much of America’s definition of “fun” is ruining everyone else’s good time? We Gen-Xers have been incredibly lucky. I can’t remember where I read this, but we grew up in a time when permissiveness came into fashion, but we were still grounded in the Judeo-Christian morals that we were raised with. I’m no Bible Thumper (more on this term in an upcoming post), but hot damn todays kids and a few of the generations between mine & theirs could really have used a moral compass instead of Helicopter Parents.

I hate to end a post on such a cool movie on a down note. While TCR’s America is gone, I like to think that in some form we can recapture this America again. It might take a split like something out of a Kurt Schlicter novel, but The Radical Left will never completely destroy America’s desire to live free and enjoy life.

And yes, I know that this tweet has nothing to do with TCR, but it does call back an era when Hollywood was creative and fun

Ron Howard is hosting a “Happy Days” reunion/Democratic fundraiser! This won’t include Scott Baio who supports Trump! John Stamos tweeted that he should take Baio’s spot at this event, which prompted Baio to tweet “Shouldn’t you be taking care of Aunt Becky?” back to Stamos! 😂😂 pic.twitter.com/wCSMbx0u3D

Ron Howard is hosting a “Happy Days” reunion/Democratic fundraiser! This won’t include Scott Baio who supports Trump! John Stamos tweeted that he should take Baio’s spot at this event, which prompted Baio to tweet “Shouldn’t you be taking care of Aunt Becky?” back to Stamos! 😂😂 pic.twitter.com/wCSMbx0u3D