democrats are masking the truth 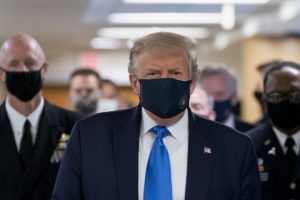 The other day Joe Biden made an utterly ridiculous and asinine assertion:

Biden claims Trump is responsible for every single person who has died from COVID-19:

“If he had done his job.” Biden, you will remember, said that Trump’s travel ban was “xenophobic” and the wrong thing to do until he changed his mind and later agreed it was the right thing to do. Dr. Anthony Fauci also testified that Trump’s early travel intervention saved lives.

Then Sanjay Gupta, the political hack masquerading as a doctor, dropped this beauty.

CNN’s @drsanjaygupta: “A source told me” Trump could have saved “80 to 90 percent” of Americans who died of Covid pic.twitter.com/Bu7q1ziojE

“A source told me.” An unnamed “source.” That’s pretty stupid.

But Gupta is a moron and a liar. Early on (Feb.29) he advised people not to wear a mask. He has also asserted travel bans don’t work.

Why is Trump taking the flak for masks? Trump has done pretty much everything that has recommended to him by his “A Team” consisting of Fauci, Birx, Adams and Redfield. And there’s the rub.

They all advised against wearing masks early on in the pandemic.

“If you are sick,” the CDC says, “you should wear a facemask when you are around other people (e.g., sharing a room or vehicle) and before you enter a healthcare provider’s office.” But “if you are NOT sick,” it adds, “you do not need to wear a facemask unless you are caring for someone who is sick (and they are not able to wear a facemask). Facemasks may be in short supply and they should be saved for caregivers.” 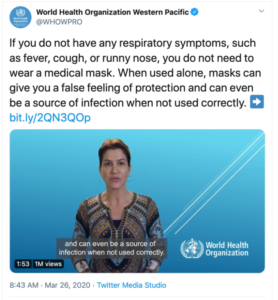 There were several similar stories:

“No, You Do Not Need Face Masks To Prevent Coronavirus—They Might Increase Your Infection Risk,” says a Forbes headline. “Seriously, Stop Buying Face Masks,” pleaded a senior writer at The Cut. “Why experts say healthy people should stop wearing masks,” reads a local Denver news report. “CDC says surgical masks won’t protect you from the coronavirus,” reads another local report in Washington state.

“There is no reason for anyone right now in the United States, with regard to coronavirus, to wear a mask,” Fauci told Spectrum News DC on February 14.

Fauci would later claim that they took that course of action to prevent a run on PPE supplies.

If Donald Trump gave bad advice to the American people, it’s because the so-called top medical advisers in the country gave him bad advice.

That’s the point. No one, not Biden, not Gupta could have done better. In fact, had Biden been President it is likely tens of thousands, if not a hundred thousand more people would have died from the #CCPvirus.

If fault is to be placed, it belongs smack on the Chinese government which chose not to seal off Wuhan from the world while sealing Wuhan off from the rest of China.

You’ll never convince me that they didn’t let it spread intentionally.