In another more civil time this deviant behavior was illegal 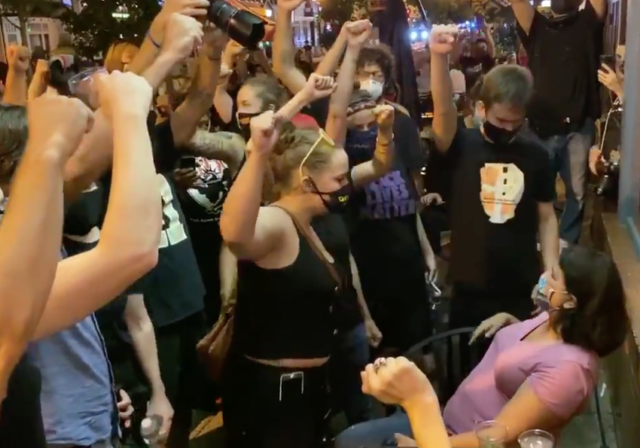 I’m so old that I remember when thugs were arrested and charged for criminal acts. That included breach of the peace, harassment and intimidation. Sadly, these actions seem quite acceptable in society as none of them are enforced any longer.

But mark my words. There is only so much of this the American public can tolerate.

Elderly man assaulted by protesters near St. John’s in DC. He appeared to be walking with another elderly female wearing pro-Trump gear. pic.twitter.com/LoharqhA60

Man and his wife leaving White House get mobbed on their way back to their hotel by livid protesters. pic.twitter.com/qnpPTfReS3

Restaurants in Rochester are looted.

Black Lives Matter activists raid Rochester restaurants and trash them. This is what social justice looks like. pic.twitter.com/uBDVvV5pL7

A man in Baltimore walking down the street is attacked from behind.

Man Caught On Video Smashing another, in the Back of the head with a brick in Baltimore😬 pic.twitter.com/wmbOdCxVOA

Whoever took the video is an accessory as he or she knew it was coming.

“Are you a black Trump supporter?” one asked. “You’re a fucking disgrace! Shame!” another shouted at Jones.

Police carrying bicycles formed a protective circle around Jones and his companion, moving them slowly down the street.

The crowd continued to harass Jones, shouting “Whose streets? Our streets!” and taunting police: “Who [sic] do you protect?”

In DC white diners are intimidated and harassed by BLM/Antifa to raise their fists in support.

Rand Paul and hid wife had their lives threatened.

This is ridiculous. This is harassment. It is intimidation. Breach of the peace. It’s illegal. The mollycoddling accorded these dirtbags emboldens them to more and more outlandish. BLM and Antifa are animals. Period.

There was a more civil time in America when this would not be tolerated. That time has to come back with a vengeance. The authorities best get a handle on it before it gets out of hand and people, having no law enforcement support, take matters into their own hands.

Me too, just do not get it. I go out right now and cross the street against the light in front of a cop, guaranteed to get a jay walking ticket.

Paul Joseph Watson did a video two days ago and nailed exactly what is taking place right now with these terrorists. Must watch IMO

If no one will stop it, it’s apparently allowed by law. Notice, this only happens where these spoiled, petulant tantrum-throwing children can be assured there will be no law enforcement curtailing their assaults.

@Manny Creighton: A Biden adviser issued a brief statement condemning the violence after the 3rd day of riots in Kenosha, referring to remarks Biden made in June condemning violence. That statement appeared to blame police for riots, saying that they “escalate tension.”

No peace, no justice, beeches.

@Manny Creighton: Yeah. The answer is you are an ill-informed idiot. If you don’t respond, you will confirm your idiocy.

The last thing this nation needs at present is a serious question over the presidential qualification clause of the U.S. Constitution. Yet, that is exactly what has presented itself in the nomination of Sen. Kamala Harris (D-Calif.) as Mr. Biden’s VP pick.

I won’t go into details here; suffice it to say Sen Harris is not even an Art. II, §1, cl. 5 natural-born citizen by the low standards set forth by the Wong Kim Ark decision.

Here’s my point. VP Pence and Sen. Harris are the only two ‘public servants’ who now have the necessary legal standing to successfully place this question before the court to seek judicial ‘clarification’ on the precise definition of an Art. II, §1, cl. 5 natural-born citizen as used in the presidential qualification clause of the U.S. Constitution.

We are going to go through a tough election cycle. Responsible public servants should be interested in using this election cycle to create good law, win or lose, for the common good of the Republic.

Again, this is a rare opportunity for the courts to address one of the most important constitutional questions left unresolved dealing with presidential qualifications. Politics should not obstruct this effort to reach a unified definition of what constitutes an Art. II, §1, cl. 5 natural-born citizen.

There is no absolute fail-safe clause or provision to protect the Republic from potentially divided loyalty in its highest elected offices. But if we weaken this provision now, that fate will come sooner rather than later, and future generations of Americans will look back at this time and call out our names, giving us the blame.

@Meremortal: In your case, no clues.

as curtis lemay has said more than once: kill enough and the rioting will stop. soon, martial law will be enforced in the cities with crapless mayors and govs. govern. martial law enforcement will require a large number of body bags. to bad when the parents of these idiots are called to the morgue to identify their useless piece of crap. so sally and little johnny were protesting during martial law lockdown. now for the parents the financial burden begins.

It’s a bit ironic that a good percentage of these protesters and rioters grew up in a public school system that proudly proclaimed on their reader boards that they were anti-bullying zones. Aside from Marxist indoctrination in college, they are also the generation of “safe places”.

Once again, public schools have failed to deliver.

Never forget Trump gave the Dems for 3.5 years all the monies they wanted to fund their communist enclaves.