Panic grips the DNC. Trump will steamroll Biden and they know it. 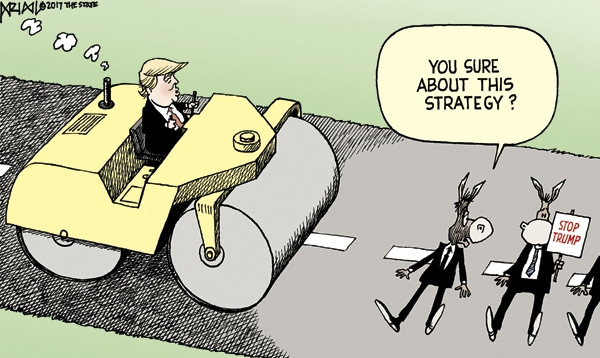 Donald Trump is going to crush Joe Biden and it will be in no small part due to democrats. There will be so many to thank for this victory. In 2016 we were deplorables. This year the vitriol is being stepped up. For instance, there is Nancy Pelosi calling Trump supporters enemies of the state.

I was shot because of this kind of unhinged rhetoric.

As Pelosi yaps, America burns, anarchy reigns and democrats have ignored the cries of the victims.

Think people haven’t noticed? There is a real human cost to all this anarchy. Here a woman cries over her lost business

In Kenosha, they recognize who is responsible

A man working on a job one block away from the main destruction in uptown Kenosha, WI says, “the people work really hard for their business and they lost everything in one day.” He added that Governor Evers and Mayor Antaramian “have no control over their people”. pic.twitter.com/CPapIo969I

Livelihoods are being destroyed in democrat run cities and no democrat cares.

Businesses have been ransacked and looted in Madison, WI. A Papa John’s employee asks the Black Lives Matter mob: “Are you trying to get Trump re-elected? I’ve got a family to support, I’ve got f’ing kids to feed.” pic.twitter.com/8wUpNrcodu

An elderly man was beaten as he tried to save his business:

Ted Wheeler, the imbecile mayor of Portland has watched his city set ablaze for nearly 100 days, says his plan is to allow the rioting to “burn itself out.”

Portland mayor Ted Wheeler (D.)—who has yet to provide his police department with consistent directives to quell the riots, arson, and looting that have plagued his city for months—told Oregon Public Radio his strategy was to let the violence “burn itself out.”

Wheeler told OPR reporter Rebecca Ellis last week that he expects daily protests in the city—which began in May following the death of George Floyd—to last for some time. He said he expects nightly violence that followed the protests “will ultimately burn itself out.”

He hasn’t addressed the losses of the property and businesses he’s used as kindling.

Joe Biden promised to “absolutely” redirect funding away from police.

“But do we agree that we can redirect some of the [police] funding?” Barkan asked Biden.

Biden went on to call for police reforms.

Kamala Harris? She’s telling Antifa/BLM not to let up on the violence.

FLASHBACK: As violent rioting continues across Democrat controlled cities, Kamala Harris' comments from June are striking: Protesters "should not" let up.

Does Harris believe the rioting and rampant vandalism in Kenosha should let up? pic.twitter.com/hqkLmC5nRu

And they are not letting up. Last night BLM assaulted Rand Paul and his wife

They were screaming at him about Brionna Taylor and in so doing proved just how galactically stupid and ignorant they are. Paul is the author of the Brionna Taylor Act

The bill is named in memory and honor of Breonna Taylor, a Louisville resident and EMT who was killed during a police raid on her home in March 2020, which was conducted under the authority of a no-knock warrant.

CNN is doing its part- for dark comedy. Not only have they jumped the shark, they’ve jumped the whale. You cannot beat CNN for sheer idiocy.

It seems that 3 months of mostly peaceful protests have been successful so far. pic.twitter.com/YPeNtFW2Ed

But one of the things about having so many victims or the families of victims speaking at this convention is that, the victims themselves are obviously no longer here with us to say how they would feel about it.

The NY Times does not want to be left out. They tried to cancel a black Christian pardoned by Donald Trump:

A New York Times money and politics reporter, Kenneth Vogel, is trying to cancel a pardoned black Christian, Jon Ponder, whose inspirational story of redemption was prominently featured on night two of the Republican National Convention Tuesday, for endorsing the president’s re-election.

“JON PONDER’s story is inspirational,” Vogel wrote on Twitter. “But should he be endorsing a candidate for president while being identified as the founder & CEO of Hope for Prisoners, which — as a 501(c)(3) non-partisan non-profit group — is barred from participating in partisan politics?”

And thank you, Joy Reid, for belittling the black people who spoke at the RNC

If you read one thing today, this would be a good choice. ⁦@ElieNYC⁩ writes about the outrage and pathos of the Black people the #RNCConvention trotted out to make white Americans feel good about white nationalism. https://t.co/V2xJzf87Dr

I haven’t endured an anti-gay attack like this in probably 10 years. #BlackLivesMatter activists physically assault me & Mike Harlow on our way into our hotel, calling us faggots & threatening us. The one girl comes back & knocks my friend’s phone out of her hand.#BLM= violence pic.twitter.com/Cmhc4g57tU

Someone please explain to me how the hell democrats get away with this- Sen. Tim Scott “might as well be white”:

Cohen, in a since-deleted tweet, wrote after Scott spoke of being a Black Republican during a high-profile speech at the Republican National Convention: “The Republican convention is a mirror of the Trump base:white, and as he likes to say, ‘the poorly educated.'” One user responded to Cohen’s tweet to point out that Scott, R-S.C. is not White.

“He might as well be,” responded another user. The user said: “He is Trump’s new black friend since he killed the last one with Covid,” referring to Cain.

“There’s no doubt it’s playing into Trump’s hands,” said Paul Soglin, who served as mayor of Madison, on and off, for more than two decades. “There’s a significant number of undecided voters who are not ideological, and they can move very easily from Republican to the Democratic column and back again.They are, in effect, the people who decide elections. And they are very distraught about both the horrendous carnage created by police officers in murdering African Americans, and … for the safety of their communities.”

But let’s be clear. They really don’t give a damn about their people. This is about polls and power. Nothing else. People are not stupid. dems can have the BLM/Antifa vote they desperately seek to lock up. The more sober and sane have somewhere else to go.

The steamroller is warming up.