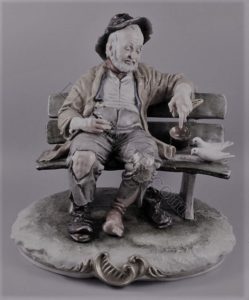 The other morning brought news that a statue of George Washington had been toppled in Los Angeles. Seven person have been arrested but given the atmosphere of lawlessness paid for in large part by George Soros the perps are likely to be released without bail and the charges dropped.

That got me thinking about statues and I think a new one is needed in New York.

A memorial to the elderly who died under Andrew Cuomo.

Officially about 6,600 elderly were killed by Cuomo’s edicts, including Janice Dean’s in-laws, but that’s probably nowhere near the real total.

New York’s coronavirus death toll in nursing homes, already among the highest in the nation, could actually be a significant undercount. Unlike every other state with major outbreaks, New York only counts residents who died on nursing home property and not those who were transported to hospitals and died there.

It could easily be thousands more.

How big a difference could it make? Since May, federal regulators have required nursing homes to submit data on coronavirus deaths each week, whether or not residents died in the facility or at a hospital. Because the requirement came after the height of New York’s outbreak, the available data is relatively small. According to the federal data, roughly a fifth of the state’s homes reported resident deaths from early June to mid July — a tally of 323 dead, 65 percent higher than the state’s count of 195 during that time period.

Even if half that undercount had held true from the start of the pandemic, that would translate into thousands more nursing home resident deaths than the state has acknowledged.

It might be ascertained by an investigation but Cuomo has already said that’s not going to happen.

Cuomo, during a press conference Monday, said he “wouldn’t do an investigation” into the nursing home deaths during the coronavirus pandemic in the state of New York.

“I wouldn’t do an investigation whether or not it’s political, everybody can make that decision for themselves,” Cuomo said. “I think you’d have to be blind to realize it’s not political.”

He’s not going to allow any investigation. Nver does. It’s not his fault, you see. Nothing ever is.

Cuomo was one of the architects of the financial collapse of the economy under the Clinton administration when he made predatory lending legal and forced banks to take on more risky mortgages.

Not his fault, you see.

In 2013 his own anti-corruption unit killed a subpoena to the NY democrat party.

Sources said the subpoena sought to seek information on the party’s spending from its “housekeeping” account — which raised millions this year used to fund ads promoting Cuomo’s legislative agenda.

William Fitzpatrick, the commission’s co-chairman, informed panel members at a private meeting last week that the subpoena was never sent. Instead, one went to the Democratic Senate Campaign Committee, Fitzpatrick said, according to insiders.

The New York Times reported Wednesday that a top Cuomo aide, Larry Schwartz, pressured commissioners to stop subpoenas to a media-buying firm Cuomo used and to the Real Estate Board of New York, whose members financially supported the governor’s campaign. The newspaper also reported that the commission was urged to steer clear of the Committee to Save New York, a lobbying group of CEOs and business groups that amassed some $17 million in donations from unidentified individuals who supported the governor early in his term with TV ads.

Cuomo’s office told the newspaper that it would be “a pure conflict of interest” for a commission appointed by the governor to investigate the governor. His spokesmen declined requests to comment further Wednesday.

Look at anything you want, said Cuomo

Cuomo said that the commission would be “totally independent,” remarking last year, “Anything they want to look at, they can look at — me, the lieutenant governor, the attorney general, the comptroller, any senator, any assemblyman.”

Right before he killed it

Cuomo effectively shut it down in April, after the Legislature passed laws intended to toughen bribery prosecutions and to establish a new campaign finance policing office.

Cuomo seems to think he can do whatever he wants to whomever he wants and then he gets to dictate what can be investigated and by whom and kill it when it gets too close.

Killing old people is a separate kettle of fish, however. The least we can do is to dedicate a memorial in the name of the elderly who died at Cuomo’s hands. If the true total proved to be around 10,000 elderly, that would be three times the number who died on 9-11.

BTW, New York City has canceled the 9-11 light tribute this year. Apparently, unlike painting street murals and protesting, it’s unsafe due to the Wuhan virus.

President Trump ALWAYS donates 100% of his salary to charity.
Usually to gov’t projects that are underfunded, like Veterans’ health.
But, this last quarter, he donated his salary toward repair/replacement of statues torn down by the criminal elements of blm and antifa.

Oh, and NYC buckled to pressure.
They will be lighting the 9-11 lights this year, as usual.

killing old people is like killing newborns, do not take a great deal of effort.