What you should know about “President” Kamala Harris’ agenda 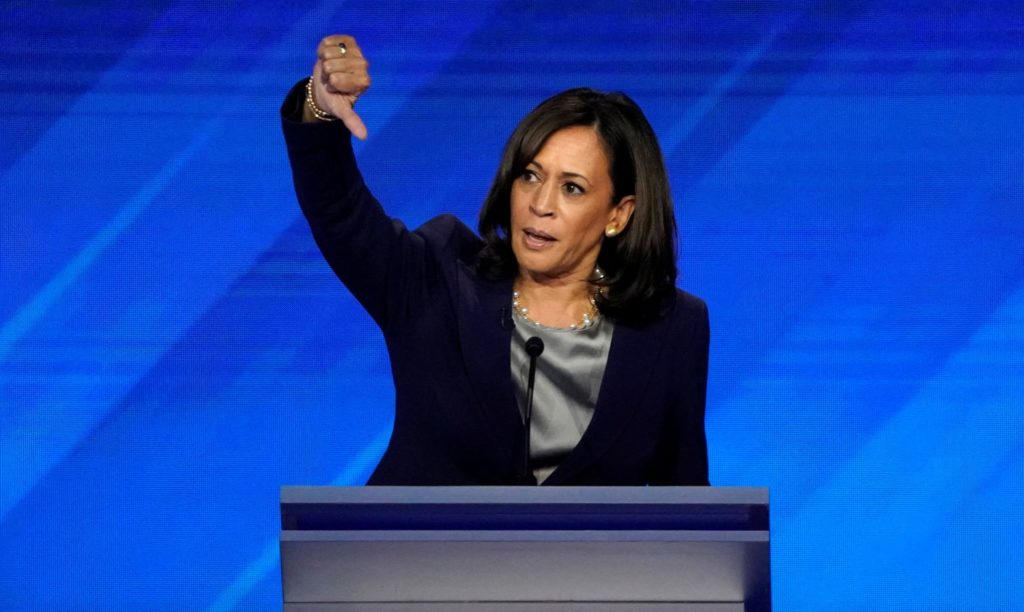 It is widely recognized, if not spoken aloud, that if elected Joe Biden would not serve out even a first term. He is in a steep cognitive decline and it appears to be accelerating. The far left representative Pramila Jayapal (D-WA) asserts that Biden is quite manipulable:

“I will be pushing him. I will — you know, as soon as we get him in the White House, and even before, with these task forces that we had, we were able to significantly push Joe Biden to do things that he hadn’t signed onto before.

That indicates Biden is, right now, a marionette. The strings are being controlled by Barack Obama and the DNC. Biden might choose to resign. By that I mean he might be told to resign. He might also be removed via the 25th Amendment cleanly and promptly.

It is my opinion that this is the plan and I have stated so previously.

Harris is hilariously being called a “pragmatic moderate” by the DNC Times, formerly known as the NY Times.

Breaking News: Sen. Kamala Harris of California is Joe Biden’s pick for vice president. A pragmatic moderate, she is the first Black woman on a major party ticket. https://t.co/Ttvh5RyxUB pic.twitter.com/NMcIz60ckH

Newsweek, not so much.

The government watchdog website GovTrack.us ranked all 100 U.S. Senators with an “ideology score” from 1.0 (most conservative) to 0.0 (most liberal). The score is based on each senator’s legislative behavior: namely, how similar the pattern of bills and resolutions they co-sponsor are to other congress members.

Biden promised stricter gun control. Harris would do more.  She would force a “mandatory buyback” of “assault weapons.” You know, the kind that shoot bullets.

Harris believes all women as long as they do not accuse a democrat.

She called Kavanaugh a rapist with far thinner evidence than exists against Biden. She believed Christine Ford, but is silent on Tara Reade now. But then, she is used to compromising evidence. She actually believed Tara Reade’s accusations.

Until a few days ago.

The California senator used the opportunity to liken ICE to the racist group.

“The Klan was what we could call today a domestic terrorist group,” Vitiello said.

“Because they tried to use fear and force to change the political environment,” Vitiello explained, prompting Harris to ask, “And what was the motivation for the use of fear and force?”

Harris is the most pro-abortion candidate in history, in favor of killing a child at birth. And she plans on expanding that.

This one is close to come for Harris. She is in favor of decriminalization for prostitution.

She’s going to have to explain a few things

The California Department of Justice payouts to its employees totaled $1.1 million in settlements during Harris’ tenure as the state’s attorney general (2011-17), according to news reports.

The Los Angeles Times has reported that “the incidents included allegations that DOJ employees sexually harassed and retaliated against co-workers, including claims involving inappropriate touching and cases in which workers felt uncomfortable with the comments and actions of others.”

All of this must be made public.

A FOX 9 report from Monday revealed that the Minnesota Freedom Fund (MFF) in recent weeks has bailed out individuals including Darnika Floyd, who was charged with second-degree murder after allegedly stabbing a friend to death, and Christopher Boswell, who is facing charges of sexual assault and kidnapping. The group put up $100,000 on behalf of Floyd and $350,000 on behalf of Boswell.

MFF received about $35 million in the wake of Floyd’s death — which came after a Minneapolis Police Department officer knelt on his neck for almost nine minutes — with at least some of it coming from a number of Biden staffers who donated to the group and then tweeted about it. And Harris, D-Calif., a former prosecutor who served as the attorney general of California for six years, promoted the fund herself in a June 1 tweet, telling her followers that the group would be able to help protesters swept up in clashes with police as unrest gripped Minneapolis.

As a prosecutor she falsified evidence

But here’s another doozy: The People (of California) v. Efrain Velasco-Palacios. In this unpublished opinion from the Fifth Appellate District, the California Court of Appeal reveals that state prosecutors and California Attorney General Kamala Harris continue to be part of the problem. Kern County prosecutor Robert Murray committed “outrageous government misconduct.” Ms. Harris and her staff defended the indefensible—California State prosecutor Murray flat out falsified a transcript of a defendant’s confession.

And as Tulsi Gabbard said

Plunge the country into darkness. Banning fracking is the start.

Harris would throw the borders open

Everyone- illegals included, would get Medicare. Your personal insurance would be toast.

‘You Are the Heroes of Our Time’

You like what’s happening in Seattle, Portland, Chicago and Minneapolis? Vote Biden

Biden/Harris want you to wear a mask- until election day.

It is important to get real here. If elected, Joe Biden would not last as President for very long. Harris would be President- an unelected President- in a short time. You can bet that democrats will agree soon after a Biden victory the left will recognize his cognitive decline and replace him.

democrat and Intelligence Community conspired against Trump to falsely tar him as a Russian tool. They’re not above anything.

I could not leave this out

Biden: 'A Black Woman Will Become President Over My Dead Body' https://t.co/xlfjwJH1sT