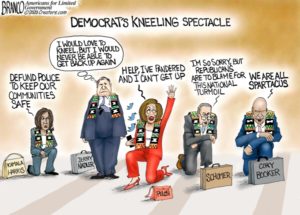 Another week, another guided tour of Crazy Town, courtesey of our Lefty pals. Let’s get to it:

Of course, it’s not racist when wealthy white Democrats are pandering

A preview for what the Dems want to export nationwide

I made the same call on slippery slopes about Gay marriage twenty years ago, and The Other McCain is showing how air brushing the Democrats’ racist past has metastasized

At least they’re being honest. Our side needs to shine as much sunlight on this as possible

Dude, you don’t mess with Southern college football fans. My prediction is we”l see the fans singing these songs in the stands independent of the school

How about some happy news? If this doesn’t put a smile on your face I don’t know what will

And Jimmy is now “on vacation” for the summer. As much as I hate Cancel Culture, I’m happy taking as many Lefty scalps as necessary, since nothing else will get through to them

If Lefties put as much energy into improving this country as they did into destroying it, imagine how incredible the greatest country that’s ever existed would be?

Before we judge too harshly, this has been the DNC’s motto since the 2000 election. Let’s not be racist and single out BLM!

A good read to close out teh week, even if I don’t share the author’s optimism. Today’s Democrats aren’t yesterday’s Democrats, but that’s a separate post in itself.

Go ahead and use teenagers to mess with Trump rally ticket sales.

But don’t you dare bitch when 4chan and right wing shit posters start returning the favor. And doing it better.


Telling authorities about the Jews in attics…sounds so familiar… https://t.co/aqrFZPjIOR

I do 🤔 Thank You Pastor for

filming the truth 👍 Any thoughts ? Wake Up America! 🇺🇸 pic.twitter.com/SA40BJADoO

This person left their tent to go for a walk around the beautiful nation of #chazseattle. When they returned their laptop was stolen, $400, food and supplies. What follows is priceless: pic.twitter.com/fRCqkGfaCQ


If Dr. Frasier Crane was still in Seattle… pic.twitter.com/nXF8gCAf5r