Hitler had his concentration camps. Cuomo has his nursing homes 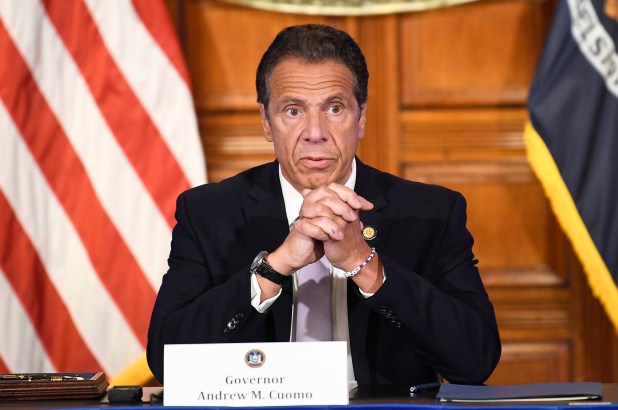 I need to get something off my chest. Andrew Cuomo is an arrogant pompous self-righteous a**hole.

Cuomo has an obamaesque ability to deflect blame from himself to any and everyone else.

Ten years ago I wrote a post in which I outlined Cuomo’s role in the financial crisis. He screwed things up monstrously. He made predatory lending legal.  He pushed GSE’s to require 50% risky mortgages. I said then that he should have been in prison. Now I find myself again asserting that Cuomo belongs in prison for his depraved indifference in the deaths of 25,000 New Yorkers, with nearly 8,000 deaths in nursing homes.

The nursing homes that he forced to accept COVID positive patients. He repeatedly points the finger at the White House, but he made the wrong choices, not the White House. Watch as he blames others

.@andrewcuomo blames the feds for his decision to send Covid patients into nursing homes: "The reason that happened was because we had the virus coming from Europe when the federal government told us the virus was coming from China.” pic.twitter.com/H5LtM0iVyI

He made the asinine assertion that patients sent to nursing homes were ‘probably not contagious.’ He was dead wrong. Nice tan, though, huh?

He was roasted by Seema Verma, the administrator for the Centers for Medicare and Medicaid Services:

Verma added later that it is “disingenuous” for Democrats such as Cuomo to claim they were following federal guidelines when they were not.

“I think the most important thing though is I think it’s disingenuous to try to undermine the federal guidelines,” Verma said. “They were absolutely clear and nursing homes across the country adhered to those and that’s why we’ve seen at the vast majority of nursing homes. I just don’t think we should ever put a nursing home in a situation or a patient where we force them to take a patient they are not prepared to care for. That not only jeopardizes the patient but it jeopardizes the health and safety of every single resident in that nursing home.”

He was also ripped by WH spokesman Hogan Gidley:

My statement regarding Governor Cuomo’s ridiculous comments attempting to shift blame and erase his direct responsibility for so many precious lives lost in New York,” Hogan Gidley, the deputy assistant and principal deputy press secretary to President Trump, quote-tweeted ahead of a screenshot of his actual statement Tuesday morning.

“Governor Cuomo alone is to Blame for refusing to shut down New York and forcing seniors who tested positive for Coronavirus back into his state’s nursing homes. His reckless response did not follow CMS and CDC guidelines devastating the senior population — and no amount of revisionist history can erase Governor Cuomo’s grossly incompetent decision or the fact that President Trump’s bold, aggressive actions saved millions of lives,” he wrote.

And by Steve Scalise (R-LA):

Our investigation centers on Gov. Andrew Cuomo’s decision, on March 25, to force nursing homes to accept known COVID-positive patients while also prohibiting homes from even testing patients for COVID-19 prior to admission. This policy, which remained in place for more than six weeks, likely contributed significantly to the thousands of elderly deaths in New York nursing homes.

New Yorkers deserve accountability and transparency. Cuomo, who is ultimately responsible, has been neither accountable nor transparent.

The governor has deflected responsibility for this mistake to any number of other entities, including, bizarrely, the New York Post. More recently, Cuomo blamed President Trump, saying, “Why did the state do that with COVID patients in nursing homes? It’s because the state followed President Trump’s CDC guidance.” PolitiFact rated this statement “Mostly False.”

In October Cuomo signed legislation allowing NY to prosecute anyone pardoned by the President. But when it comes to his accountability- not so fast. Watch this proclamation

In a series of calamitous and embarrassing interviews, Fredo Cuomo interviews his big brother “the luv guv” and just gushes

Not objective but true,the facts tell the story.NY had & has its struggles but they're doing way better than what we see elsewhere & no way that happens without the Luv Guv dishing the real 24/7.He works with relentless intensity & NY's better for it.And as a brother, I am proud. pic.twitter.com/M1TrAtQwCo

“I hope you are able to appreciate what you did in your state and what it means for the rest of the country now and what it will always mean to those who love and care about you the most,” the former ABC “20/20” anchor added. “I’m wowed by what you did, and more importantly, I’m wowed by how you did it. This was very hard. I know it’s not over. But obviously I love you as a brother, obviously I’ll never be objective, obviously I think you’re the best politician in the country. But I hope you feel good about what you did for your people because I know they appreciate it.

“Nothing’s perfect, you’ll have your critics,” he concluded. “But I’ve never seen anything like what you did and that’s why I’m so happy to have had you on the show. And I hope you know that.”

He’s proud- proud that his brother doomed 8,000 elderly. Others are not so proud.

Janice Dean lost both her in-law parents to CUOVID.  She’s not proud of Cuomo

At least @ChrisCuomo admitted he’s not objective, and I guess the giant cotton swab wasn’t appropriate this time. Your bro still has the highest death toll in any state and his name is still on the order that forced Covid into nursing homes killing thousands. You’re both awful. https://t.co/zIoJXJtWT0

Fredo said “let the facts tell the story” and this morning on Fox News Joe Concha went over those facts:

Mass transit you say? Three months I wrote this

This is what I would do

1. Make everyone wear a mask. There are easily enough once a union admitted it was hoarding 39 million N95 masks coincidentally after AG Bill Barr said he would prosecute hoarders.  If it can’t be N95 masks then any mask will do. Anyone not wearing one should be detained and quarantined. Put police in masks and face shields and allow them to hand the masks out.

2. Expand mass transit services – buses, trains and subways- such that social distancing can be observed. Disinfect them repeatedly. Hand out disinfectant wipes on each one.

Shutting down mass transit is the real answer but it could mortally wound the city. Cuomo might want to stop whining and stop ignoring the fact that New Yorkers are ignoring him.

Hitler had his concentration camps. Cuomo had his nursing homes. For the occupants of both the outcomes were largely the same.