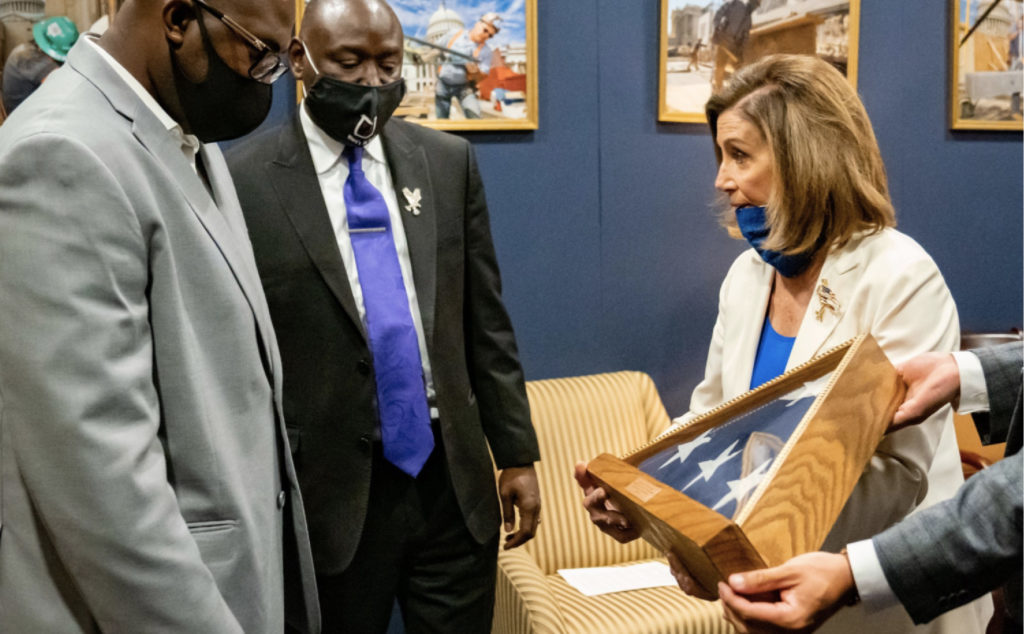 I really despise Nancy Pelosi but this time she has done something really, really distasteful and entirely disrespectful to the US military.

When a soldier falls in service or a veteran passes, it is customary to drape the coffin with a flag of the United States for the funeral and present it to a family member.

The portion of the flag denoting honor is the canton of blue containing the stars representing states our veterans served in uniform. The field of blue dresses from left to right and is inverted only when draped as a funeral cloth over the casket of a veteran who has served our country honorably in uniform. In the U.S. Armed Forces, at the ceremony of retreat, the flag is lowered, folded in a triangle and kept under watch throughout the night as a tribute to our nation’s honored dead. The next morning it is brought out and, at a ceremony of reveille, flown high as a symbol of belief in the resurrection of the body.

At the conclusion of the funeral the flag is folded 13 times and there is a meaning to those folds:

After folding, the flag takes on a unique shape:

After the flag is completely folded and tucked in, it has the appearance of a cocked hat, ever reminding us of the soldiers who served under Gen. George Washington and the sailors and Marines who served under Capt. John Paul Jones and were followed by their comrades and shipmates in the U.S. Armed Forces, preserving for us the rights, privileges and freedoms we enjoy today.

This is a military honor, although if desired, an American may have a small star flag on the casket, but large star flags are for military veterans and (cough) politicians. This is a large star flag.

Pelosi presents folded flag to George Floyd's brother. I must be wrong. I thought they only did this for service men and women who gave the ultimate sacrifice? pic.twitter.com/7CivuC1VBW

George Floyd- who did not deserve to die- was no saint. He had a lengthy rap sheet. He was not a veteran.

I was presented a flag once, at my father’s funeral. It proudly resides in my home. My father was a WWII combat vet, part of the Greatest Generation. The real thing.

I resent what Pelosi did. It cheapens and politicizes what military honors are supposed to mean. She took a knee for Black Lives Matter but not for Chris Kyle.

They are diminished by her actions. Perhaps she can unilaterally award Floyd the Congressional Medal of Honor.

Everybody gets a trophy whenever it helps politically.

Since when did the Speaker of the House do such things?

Vote them out. They want Chazistan Communism and you/they know it.

Absolutely disgusting. But, typical demeaning activity by America hating democrat leftists. George Floyd does not deserve to be a recipient of the American Flag. It is a dishonor to those who have served this Country. What did Floyd ever do for this Country?

Maybe Pelosi should have given him a laminated copy of her speech to lionize Robert Byrd, KKK Grand Kleagle (laminated so he can’t tear it up later).

Pelosi and other Democrats never miss an opportunity to piss on this country. Of course, their supporters simply love it, but they are scum, too.

Nasty Nancy presents a U.S. Flag old Glory to thee FATHER OF A CRINIMAL yes like just about all liberals Pelosi is dumber then a stump.When my father a Veteran if WW II passed away in 1982 my mom got the Flag from his Coffin. Once again the Democrats show their not worth being elected

bar fly pelosi is truly a piece of communist shit. my daughter died in service to this country. now a career criminal is honors with a military flag? searched the internet and could not find what branch of the service he served in??

@MOS#8541: I am sure veterans and those who have lost loved ones in the service of their country find this particularly repugnant, but remember; the left HATES the military.

@Deplorable Me:
true, six years in the Corp: Semper Fi

her conduct, representing the dnc, is a complete disgrace to the American Military.

I believe it is intentional!

her conduct, representing the dnc, is a complete disgrace to the American Military.
I do not believe that this piece of fecal material was ever in the service.

The fact that democrat Bill Clinton was Vietnam Draft Dodger

@Nathan Blue: You have to get the voters 8n her district to vote her out. Good luck.

My mom also got a certificate signed by Ronald Reagan a Award for his WW II contribution.Pelosi had better remember JFK served his country in case she never heard of the PT-109

The elections are fake in the S.F. Bay . . . The DNC has been stealing elections for decades in California.

What a disgrace to Veterans and men and women in the armed services. Shame on her for doing this.

That’s what the reader is SUPPOSED to think, even though there’s not a bit of truth to it.

This article is an exploitative propaganda piece that relies on patently faulty logic. While the presentation of the flag that covered the casket is customary following a funeral that involved military honors, the simple act of presenting someone with a flag does not imply any degree of military honors are being conferred.

Turn on your brain. The fact that all ducks are birds does not imply that all birds are ducks.

The flag was presented by Pelosi to Philonise Floyd in recognition of the personally difficult testimony he gave before Congress in support of reform of the nation’s criminal justice system. It was a flag that was flying at the Capitol on the day that his brother was killed. The presentation was part of the Capitol Flag Program, which began in 1937 and has expanded enormously over the years. If you’re not familiar with that, the program involves presentation of around 100,000 flags per year. Any member of Congress can make a request for such presentation flags however often he or she sees fit. Many flags are raised and lowered on the Capitol grounds daily to fill the demand.

Nancy Pelosi’s disrespectful and dishonorable presenting of our flag will not be allowed to diminish my humble pride in the flag that was presented at my husband’s funeral.

The presenting of our flag remains a most cherished tradition and distinctive honor and should be reserved for people who have served our nation with loyal patriotism, sacrifice, and integrity. George Floyd was a repeat criminal and had never served his country with the slightest bit of honor. Re his brother – thousands of people have given testimony without being rewarded with our flag. Perhaps Nancy Pelosi should have presented a flag instead to the family of retired police captain David Dorn who was killed and abandoned on a sidewalk during the riots that followed George Floyd’s death. This particular presenting by Nancy Pelosi was an act only intended to support and publicize the Democrat diminishing of our law enforcement officers.

Nancy Pelosi is a vile disgrace to America and to the beautiful tradition of the presenting of our flag.