Iconic Photo of the Day?

Every movement, every event, has its iconic photo. 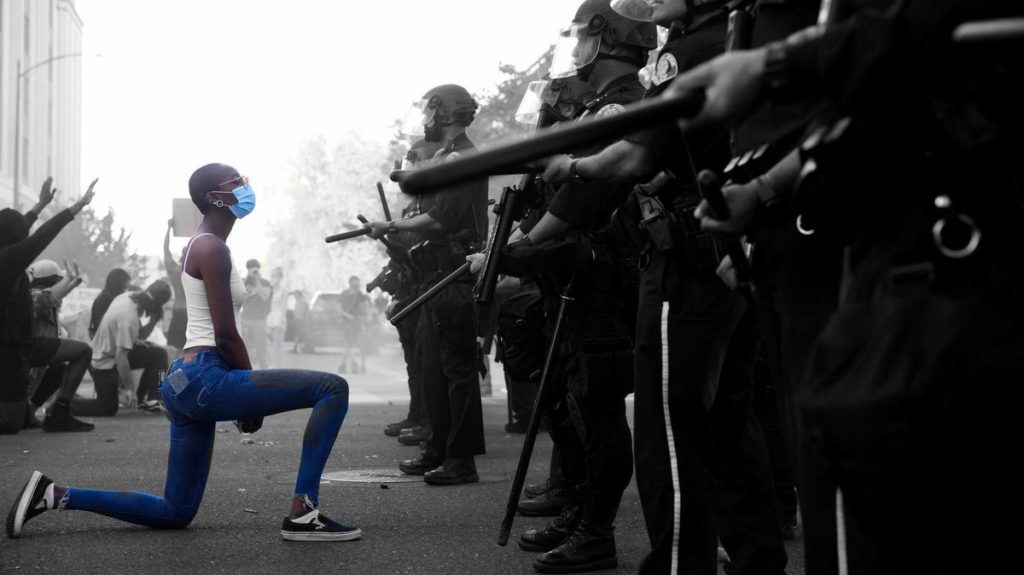 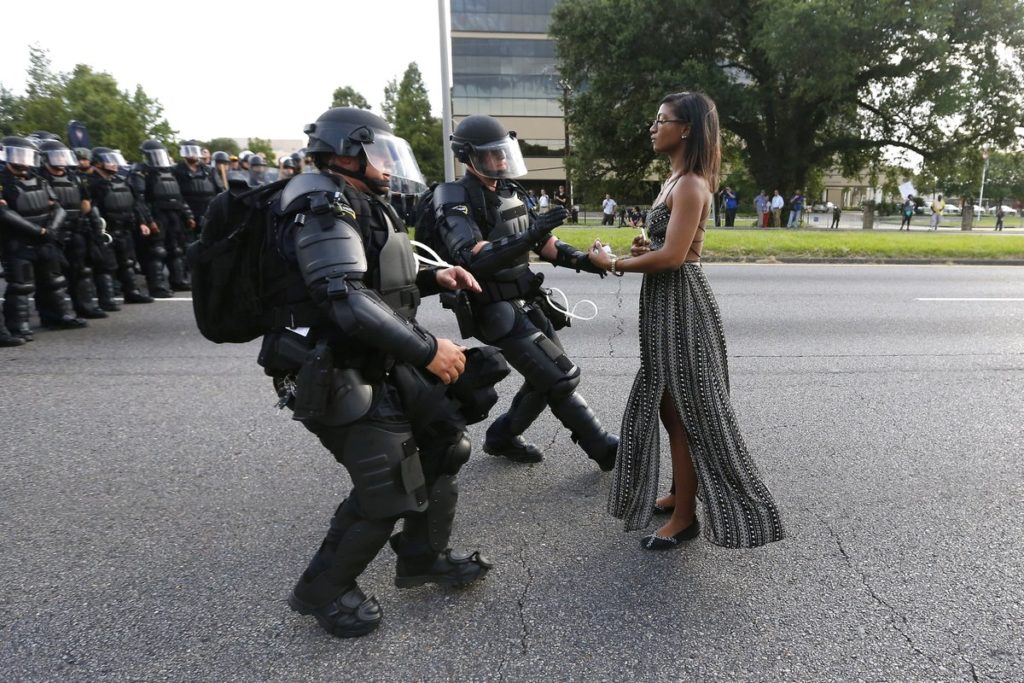 So last night, on Facebook, one of my friends linked to someone who had posted this photo, unsourced: 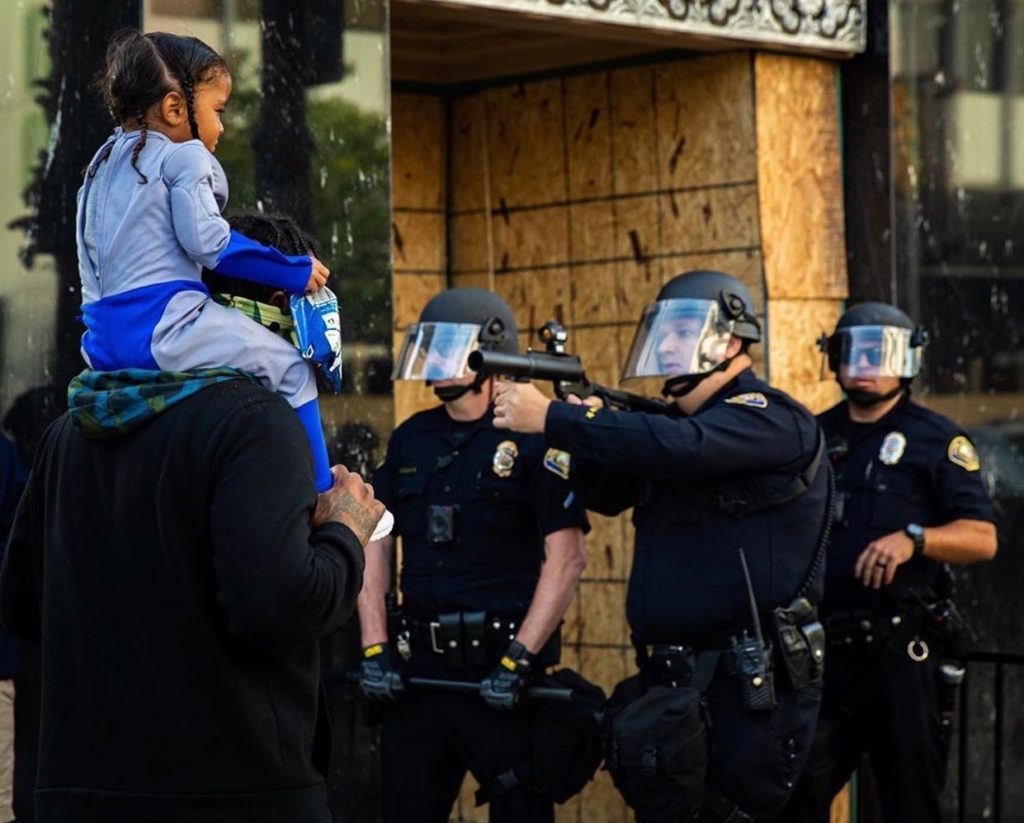 My first reaction was suspicion that it was photoshopped; or not what it appeared to be.  Someone else commented and my friend removed the photo.  Meanwhile, it showed up again on my newsfeed at The Root. And frustratingly, but perhaps not unsurprisingly, even though they’re a more professional site that should be elevated a step above amateur blogger (like FA :-D), they also posted without sourcing the photo.

So scrolling through the comments section, I came across one commenter who thought it was doctored (due to the girl in what appears to be a Halloween costume).  But this is not the case.  The photo is real.  Another commenter (for what it’s worth) was making mention that her friend was there and the police were reacting to things being hurled at them; and the father with daughter were actually off to the side, about 3 feet to the left of the officer with the rubber bullet gun.  If you look closely, you can see that the officer is staring off into the distance and not looking at the father-daughter.  The trick of the camera perspective makes it appear that he is standing directly in front of the father and child unless one is examining it closely.

Originally I had gone to Snopes (when I initially saw my friend’s photo).  But that turned up nothing.

I made a subsequent Google search for “police rubber bullet gun” and it turned up Australian news sites that were linking to the photo in news articles that did source the photographer:  Richard Grant.

It turned up the following caption with the photo:

Freelance photographer Richard Grant took this photo of a police officer pointing a rubber bullet gun in front of a man and a child during protests at Long Beach, California. Picture: Richard Grant Source: Supplied

Richard Grant self-describes this as “This is probably the most impactful picture I have ever taken.”

As one person notes about the deceptiveness, perhaps subliminally intentional:

Would have been nice to preface it with that instead of being misleading. You can clearly see the cop is not even looking at that man and is looking past him. You also have no photo of what was happening for the cop to point the launcher that way. So “impactful”.

Realizing some people perhaps are reading more into the photo than is there and infusing their own political agenda, Grant further writes:

To be clear here is the full caption that was on my Instagram post “This man stood with his child most of the time until the police started using concussive grenades but they never fired on him but did occasionally pointed their rubber bullet guns towards him.”

Photojournalistic standards are important. This photo does NOT show an officer pointing a weapon at dad & kid. If that happened, this photo didn’t capture the moment. It’s like saying “Lebron hit the game winner at the buzzer,” and showing a photo from the 3rd quarter. Misleading

A bit of clarification about the photo:

One of Grant’s Twitter followers did a close up of the officer’s trigger finger, criticizing.  That might be a legit point if the officer were at rest and aiming at the innocent father-daughter.  But the photo may have captured the moment the officer was gearing up to suppress the crowd hurling items at them.

Not sure if it matters, but the officer with the “less-leathal” 40mm LMT Tactical Single Launcher is Deputy Chief Michael Lewis. About to fire a SDI 40mm round. Velocity 285 ft/sec Min Range 6.5 feet There is no safety on the 40mm LMT. He looks closer than 6.5 feet.

Here’s another angle by Grant, from the other side.  Same players and situation, different moment in time:

For sure, the “iconic” Grant photo from the Long Beach protest may pick up some steam across the internet; and no doubt most people will fail to do proper research and seize upon the photo to fulfill an agenda and reinforce a narrative.  Push back against that kind of garbage.

The father may have intended to bring his daughter to a peaceful protest; however, once it’s clear that there were bad players with riot police and instigators and agitators amidst the protesters, the responsible thing would be to not stand between the two factions, maybe?  Knowing full well violence may erupt at any moment.

Photos and videos don’t always tell a complete story.  Take everything for what it’s worth; and be cautious that your own political leanings and ideology don’t inaccurately fill in the blank for you.  Then you become part of the problem.

He’s there for peaceful protest, right?: 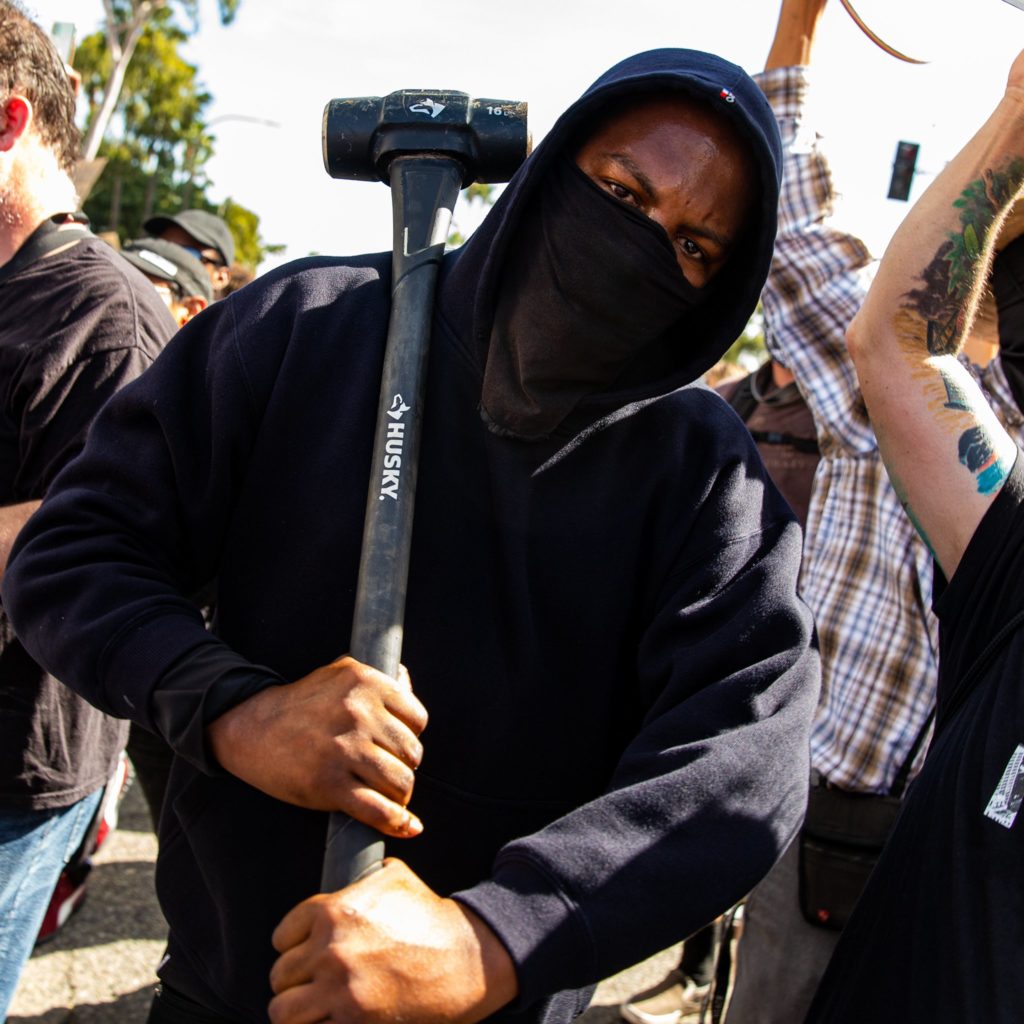 Your photos are great, but the police use images like these to find and persecute protestors. Please protect their anonymity.