Flynn was set up by obama: sanctions were the bait 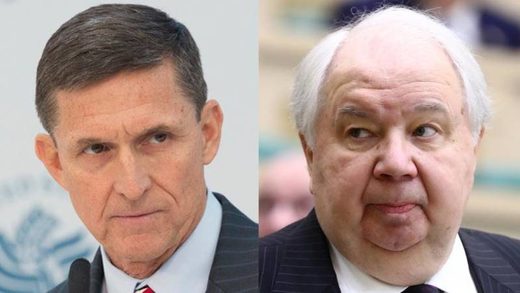 Barack Obama learned of the coming plans for Russian election meddling in 2014:

The Obama administration received multiple warnings from national security officials between 2014 and 2016 that the Kremlin was ramping up its intelligence operations and building disinformation networks it could use to disrupt the U.S. political system, according to more than half a dozen current and former officials.

As early as 2014, the administration received a report that quoted a well-connected Russian source as saying that the Kremlin was building a disinformation arm that could be used to interfere in Western democracies. The report, according to an official familiar with it, included a quote from theRussian source telling U.S. officials in Moscow, “You have no idea how extensive these networks are in Europe … and in the U.S., Russia has penetrated media organizations, lobbying firms, political parties, governments and militaries in all of these places.”

Then, oddly, obama did nothing about this potential interference.

You will remember that obama ridiculed Romney in 2012 for Romney asserting that Russia was geopolitical foe. Obama went to bat for Russia.

Then, inexplicably, when learning of new Russian efforts to hack the election, Obama ordered US cyber defenses to stand down:

WASHINGTON — The Obama White House’s chief cyber official testified Wednesday that proposals he was developing to counter Russia’s attack on the U.S. presidential election were put on a “back burner” after he was ordered to “stand down” his efforts in the summer of 2016.

The comments by Michael Daniel, who served as White House “cyber security coordinator” between 2012 and January of last year, provided his first public confirmation of a much-discussed passage in the book, “Russian Roulette: The Inside Story of Putin’s War on America and the Election of Donald Trump,” co-written by this reporter and David Corn, that detailed his thwarted efforts to respond to the Russian attack.

That was pretty damned curious and it got even more curious. Adam Schiff was critical of Obama’s lack of response

“The American people needed to know, and I didn’t think it was enough to tell them after the election but rather given the seriousness of this, I think the administration needed to call out Russia earlier and needed to act to deter and punish Russia earlier, and I think that was a very serious mistake,”

This was part of the plan – providing cover for obama. Appearing concerned.

Obama claimed that he did not respond to Russia because he did not want to be seen as affecting the election.

The Obama administration didn’t respond more forcefully to Russian hacking before the presidential election because they didn’t want to appear to be interfering in the election and they thought that Hillary Clinton was going to win and a potential cyber war with Russia wasn’t worth it, multiple high-level government officials told NBC News.

This too is bullsh*t.

On Dec. 29, 2016 Obama announces the Russian sanctions. I could not help but wonder- why wait? If he did not want to be seen as affecting the election why not implement them immediately after the election?

Because it was a set-up.

After conferring with the Trump team, Flynn was instructed to call Kislyak about the sanctions.

Dec. 29, 2016: K.T. McFarland, according to later CBS confirmation, while at Mar-a-Lago and with other top officials including Reince Priebus, Kellyanne Conway, Stephen Miller and Steve Bannon, tells Flynn to communicate to Kislyak about the U.S. sanctions. Flynn calls Kislyak.

The conversation was leaked

Obama implemented the sanctions when he did as bait to see what Flynn and Kislyak were going to say.

On January 10, James Clapper calls David Ignatius of the Washington Post and tells Ignatius to “take the kill shot” on Flynn .

The Ignatius article is published on January 12.

Flynn said nothing wrong in the conversation, which was cleared by the FBI.

The FBI has reviewed intercepted phone calls between national security adviser Michael Flynn and the Russian ambassador to the US and has found no evidence of wrongdoing, it was revealed Monday.

But this part is a lie

The calls were made in late December and picked up as part of routine electronic surveillance of Russian officials. They did not reveal any illicit ties between Flynn and Russia, according to the Washington Post.

As JE Dyer noticed, those calls were not captured by the US IC. “It wasn’t our product.” That means it came from the “5 Eyes” or directly from the FBI.

True. The IC doesn’t have all the transcripts/summaries….it wasn’t our product. It’s odd that @AdamSchiff doesn’t know this. But I already started the declassification for the few we received. They should be released in full, though. The public deserves to see it. https://t.co/Inj8etyCZv

This attempt to frame Flynn fizzled in this trap so something else had to be done. That’s why Strzok kept the Flynn case open, and why Comey sent two thugs over to entrap Flynn. They interviewed him and found him not to be lying until Lisa Page rewrote the 302’s to find Flynn guilty of lying and Mueller’s rabid cohorts went to work on Flynn.

obama clearly timed the sanctions as bait for Flynn. That would explain why he waited until late December to implement them. It also fits with obama’s order to allow intelligence gossip to flow freely around 17 agencies. And I still have my suspicions about Kislyak. Kislyak met with Jeff Sessions in 2016 and that provided democrats the excuse to sideline Sessions – as they had done to Nunes- and allow Rosenstein to run amuck.

Remember- Sessions was instructed by the DOJ not to disclose his meetings with Kislyak.  Later democrats would use this to beat Sessions into submission and recusal.

Barack Obama is a devious person who grossly abused the power of the Presidency.

Gen. Flynn’s sin was asking Russia not to impose retaliatory sanctions on the US. Oh, that bastard. That greedy, selfish bastard.

Democrats never question why, if the person is so guilty, it is necessary to lie, destroy documents and create new ones to convict them. They simply accept the lies as regular business.

Susan Rice wrote it was all done “by the book”.

Now we just need to find that book.

PUBLIC SERVICE NOTICE: Trump is a gold-plated, two-bit sidewalk Svengali, and if you’re not careful, your brain will belong to him.

And, if on cue, Comrade Greggie posts another one of his useless YouTube videos.

At least we know how he spends his time; searching left wing websites and perusing YouTube for useless videos, having his opinion formed by third-rate comedians.

I’ll say it again! Greg is joking. He has to be. It’s not possible to believe the nonsense he spouts and still be capable of tying your own shoes. What am I saying? How do we know that he ties his own shoes? Disregard.

@Greg: He must have gotten yours and won’t give it back.

It’s not possible to believe the nonsense he spouts and still be capable of tying your own shoes.

He’s most likely a troll, and perhaps not even American..or not in America as he writes his disinformation.

Small chance “greg” is just an account used at his bot farm, with several people writing under that name.

Last possibility is that he really is a coward American that slipped through the cracks of both education and experience.

He only writes under certain “hot topics” and there’s a pattern to what he hits on and what they are all colluding about at the MSM networks.

Trump is Godzilla: a monster we allowed out to fight you scum…pushing the other monsters back to the sea.

Trump is Democrat made. Own it.

0
Reply
Flynn was set up by Obama: sanctions were the bait | Headline of the Day

Flynn was set up by obama: sanctions were the bait