The Scale & Size Of The Obama Spygate Is Unprecedented 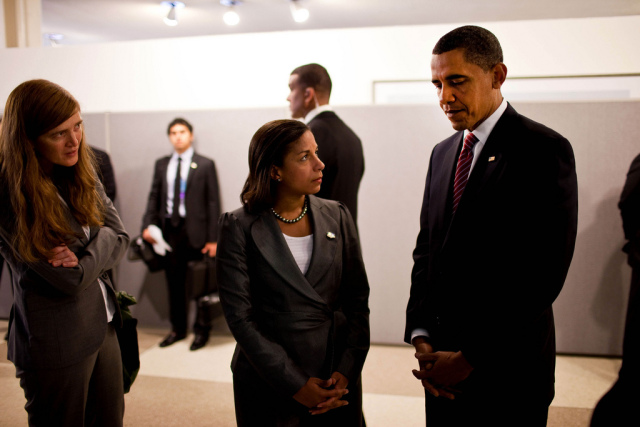 The scale in which a dozen or more Obama officials asked for Michael Flynn’s name to be unmasked is unprecedented.

For two months beginning on election day these officials made 49 requests to unmask his name.

These requests were made a full six weeks prior to Flynn’s call to a Russian diplomat, a call that was completely justified for an incoming administration, and a call that after it was leaked to the “reporter” David Ignatius began the Russia collusion coup attempt by Mueller and company.

The number of requests made is evidence of wide ranging illegal surveillance operation to target one of Trump’s most trusted adviser to influence his foreign policy.

Interviews of former Obama officials released last week show that the previous White House promoted a culture of espionage. Republican Congressman Trey Gowdy told Power that she is the “largest unmasker of US persons in our history.” Pressed to explain why she unmasked more than 300 US citizens in less than a year, she could not muster an answer.

They just couldn’t believe that Trump had won and now they wanted to bring him down by any means necessary. If Hillary had won they all believed, justifiably, that none of this spying would see the light of day.

For nearly two years, CNN eagerly offered itself up as a platform for House Democrat Adam Schiff and former Director of National Intelligence James Clapper to claim there was “significant evidence” of collusion between the 2016 Trump campaign and Russia. But after the May 7 release of transcripts in which numerous top-level Obama officials admitted they’d seen no evidence of collusion, CNN should be embarrassed by their cozy relationship with Schiff and others who strung the liberal cable network along for 22 months.

Clapper himself was among the officials interviewed by the House Intelligence Committee. On July 17, 2017, the former DNI admitted under oath: “I never saw any direct empirical evidence that the Trump campaign or someone in it was plotting/conspiring with the Russians to meddle in the election.”

That remark stands in stark contrast to Clapper’s comments on the February 8, 2019 edition of CNN’s Anderson Cooper 360, where he was asked whether he thought the President might be working on behalf of Russia instead of the U.S. Then, the former DNI sounded a far more sinister note: “Well, it’s a reasonable question.”

Clapper wasn’t the only former Obama official to abruptly stop pointing fingers at Trump once he was under oath. As NewsBusters previously pointed out, former Obama Defense official Evelyn Farkas went from accusing Trump of collusion on MSNBC to admitting to the House panel: “I knew nothing.”

Now the Obama apologists and Biden backers have a new strategy. Accusing Flynn of other crimes.

I see the drip-drip crowd stressing that Flynn was supposedly involved in other crimes. It's a bad defense. If true, the Obama admin shld have prosecuted him on FARA charges. They didn't. Instead they railroaded him to keep a rickety Russia investigation going.

The big picture in all this is that the left and dimwitted NeverTrumpers never had any crimes, used a bogus dossier to spy on the Trump Administration and then attempted to cover-up these illegal acts by targeting and destroying anyone they spied on.

This isn’t over by a long shot:

The issue of how the FBI is explaining their discussion of the Flynn-Kislyak call; which they are now saying (falsely) they discovered via “incidental collection”; is likely why those unmasking records are valuable to, and requested by, John Durham.

In the end history will judge that the Obama administration was a disaster for their party and this country.