Obama and dems begin to panic 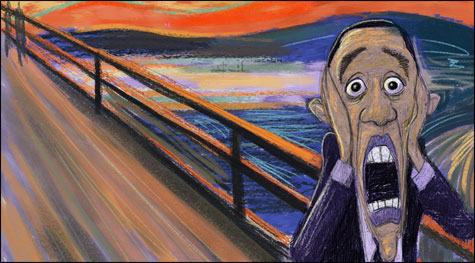 The laughable collective known as the House Judiciary democrats have sent a letter to Michael Horowitz, the DOJ Inspector General, demanding an investigation into Attorney General William Barr’s respect for the law and protection of the falsely accused. 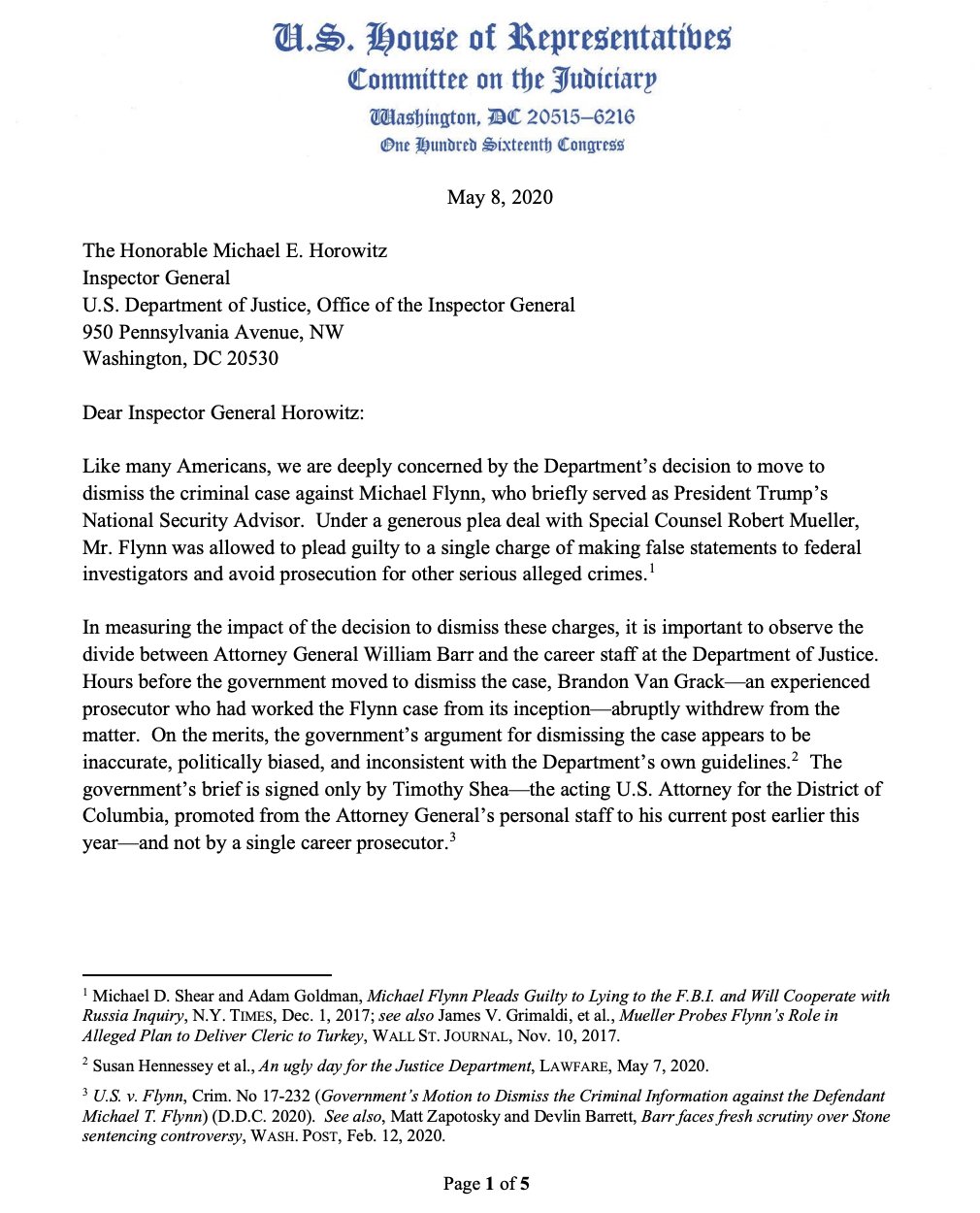 Then last night an audio was “leaked” to Michael Isikoff. You might remember Isikoff- he is the go to leak reporter when something helpful to democrats is needed. Isikoff was the the guy they went to when the obama IC needed circular reporting to help frame Carter Page:

“The Carter Page FISA application also cited extensively a September 23, 2016 Yahoo News article by Michael Isikoff, which focuses on Page’s July 2016 trip to Moscow,” the memo states. “This article does not corroborate the Steele dossier because it is derived from information leaked by Steele himself to Yahoo News.”

The audio “leaked” to Isikoff was of Barack Obama speaking to something called the “Obama Alumni Association” about his being “disturbed” by AG Barr’s actions:

“The news over the last 24 hours I think has been somewhat downplayed — about the Justice Department dropping charges against Michael Flynn,” Obama said.

“And the fact that there is there is no precedent that anybody can find for somebody who has been charged with perjury just getting off scot-free. That’s the kind of stuff where you begin to get worried that basic — not just institutional norms — but our basic understanding of rule of law is at risk. And when you start moving in those directions, it can accelerate pretty quickly as we’ve seen in other places,” he added, misstating that Flynn was charged with perjury. Flynn was charged with false statements to the FBI about his conversations with a Russian envoy.

“…misstating that Flynn was charged with perjury.”

Indeed. Classic obama. The rule of law was constantly and brutally abused during the obama administration.

The above are indications that obama and democrats are in a state of panic. We now know that obama was well aware of the wiretaps on Michael Flynn:

Obama’s unexpectedly intimate knowledge of the details of Flynn’s calls, which the FBI acknowledged at the time were not criminal or even improper, raised eyebrows because of his own history with Flynn — and because top FBI officials secretly discussed whether their goal was to “get [Flynn] fired” when they interviewed him in the White House on January 24, 2017.

Such “intimate” knowledge might tempt one to opine that obama played a role in directing the wiretap of Flynn and the subsequent “leak” of his conversation with Kislyak.

Add that to the explosive disclosure that not a single person interviewed by the loathsome lying Adam Schiff – from Clapper to Yates to Farkas-  had any evidence of Russian collusion on the part of the Trump team.

Despite that, those weasels persisted in maligning the Trump administration for years as though there was such evidence. For a long time the execrable Schiff insisted there some magical evidence of collusion “in plain sight” while he did his best to bury the transcripts of the testimony which would vindicate Trump. None of that evidence ever appeared. You have to wonder why the left wing media never asked him about.

I’m kidding. You know why.

In testimony that damned Clapper had to admit what we’ve been saying here from day one- that it wasn’t so much that Putin wanted Trump to win as he wanted Clinton to lose. Putin hated her for her interference in the 2011 Russian elections.

There really are no words that can adequately describe what a scumbag Schiff is. Frankly, they all are scum.

And they know they’re in trouble.

I’ve said that this is the greatest political scandal in the history of this country and it is. However, there will be a reckoning despite the threatening letters and bluster now.

Two years ago an angry Michael Flynn Jr. tweeted out this

“You’re all going down. You know who you are. Mark my word….”

CNN couldn’t imagine what he meant. Perhaps now they do.

I wonder how Lynch, Yates, Brennan, Clapper, Rice, et al like it that Schiff let those transcripts get out of his clutches? No doubt he assured them they would never see the light of day and they could go forth and lie to the liberal media all they wanted about Trump being a traitor, a liar and a Russian asset despite their sworn testimony.

Obama cared so much about the “rule of law” that he and Holder ran guns to Mexican cartels, when he spied on journalists, when he turned the IRS on conservative non-profits, incited and excused riots and funded international terrorism.

when Trump wins on 11/4/20, the gay, muslin ex pres will be on the run. just a matter of time when this feces is prosecuted. the democraps want to rewrite history, Trump will rewrite it for them. ruthy is sick and will exit the court along with Clarence Thomas in the near future. like all democrap elections: democrap politicians don’t steal elections, the pay for “em.

While this is old news to some of us, we certainly are glad to see it surface to the point that the media will now have to show its colors as a protection force for seditious criminals.

Thank God that the wonderful Repulsican Reps that we sent to D.C. are screaming for Schiffty’s “censure.”
Ooooops….don’t tell me they’re still cowering ‘neath their desks.

The Democrats are evil. They constantly obfuscate and can’t deal with truth. I just wish that somehow someway Schiff can be hit with a libelous suit even if it goes nowhere but keeps him tied up in court. I realize he’s protected on the house floor but not when he speaks as a private citizen. Hoping, but not confident.

What would deter these commie shitbags from their evil actions? Well, we could try THIS: PUBLIC EXECUTIONS BY GUILLOTINE- followed by the HEADS OF EVERY DEEP STATE TRAITOR displayed on POLES lining 1600 PENNSYLVANIA AVE., the full length of BOTH SIDES OF THE STREET. A REAL public demonstration of AMERICAN JUSTICE…..

Nice try but nothing will happen. Hillary was the mastermind of the entire lie and she is suddenly forgotten. Obama has now been exposed. Where is Barr? Where is Durham. Sorry this is what I call “Trey Gowdy USDA pure ground Red Meat” that sound delicious, but has no taste

“You’re all going down. You know who you are. Mark my word….”

In a true constitutional republic, where equal justice under the law prevails, it would happen. However, other than the decision to drop the charges against Gen Flynn, we have seen zero indication of this. There is ample evidence that is already public knowledge to nail Hillary, Comey, Clapper, Brennan, McCabe, Strzosk, and a host of others for serious crimes such as perjury, obstruction, criminal conspiracy, espionage etc.yet they all walk free spouting their lies while giving the country the middle finger. Until indictments start coming down, the best we can hope for is payback through the civil side and a huge blotch against Obama’s “legacy”.

Now the Marxists, camouflaged as liberals, are going to really accelerate the attacks, screaming lies and absurdities, pulling out everything from their bags Full of hate.

Anything and everything will be justified to protect Obama.

We will also be presented some surprises as to who they throw under theIr insanity bus.

@another vet: In the end, the true villains here are the corrupt liberal media. Without their complicit help and protection, Democrats could not get away with the things they do and wouldn’t attempt it for fear of the consequences. The media gives those they protect the confidence they can get away with their antics.

Unfortunately, as long as the donkey party succeeds in cheating at the polls, they will still come too close to winning the next election. Having worked at polls before I know cheating exists.
We need only paper voting & stained thumb prints as they did in Iraq to ensure accurate voting.

I hope they do panic ~ as their crimes are about to be revealed.
I have been praying for going on 3 yrs now, EVERY DAY that clear concise evidence comes out, so there can be not doubt about their crimes, and that there be convictions based on clear and concise evidence so their can be no doubt. However, those on the left are apparently incapable of looking at clear and concise evidence and coming to a logical conclusion.
I pray for clear and specific convictions long prison terms, AND the appropriate sentence for treason. I don’t know if the citizens can deal with that, but it must be clear TREASON is NOT an acceptable crime in the USA!

@Deplorable Me: The sampling of the left wing sites’ headlines on RCP reveals that. You don’t even have to click on the link to the article to know they’re full of lies because the title to the article is a lie in and of itself. The MSM gets away with it because there are still enough ignorant people out there who believe them or have no issue pushing the lie because it satisfies their own beliefs in their deranged alternate universe.

Now that the walls are closing in on Obama, any bets on when the race card gets played? I’m surprised it’s taking this long.

@another vet: I am glad to see so many readers working their key boards. As I said on another thread, I doubt Obama will be charged with anything, but for history, it is good for the documentation of Obama’s crimes. It should be a lesson to voters, beware of candidates from Chicago no matter their race. Maybe I should also include New York City, too.

@Randy: One thing is for certain; NOTHING will happen unless Republicans have full control of Congress, the wider the margin the better. Democrats are desperate to keep their seditious behavior covered up.

@Randy: His “legacy” will be tarnished forever but even then, the lefty historians will ignore the magnitude of what he did. Nixon and Watergate don’t came anywhere close. Those who voted for him and don’t care about what he did will vote for someone else just like him because they too are American hating totalitarians. I blame his blind supporters just as much as I blame him because without like minded people, he never would have gotten in.

Randy you are absolutely right!