How Soon Will the American People Demand Freedom? 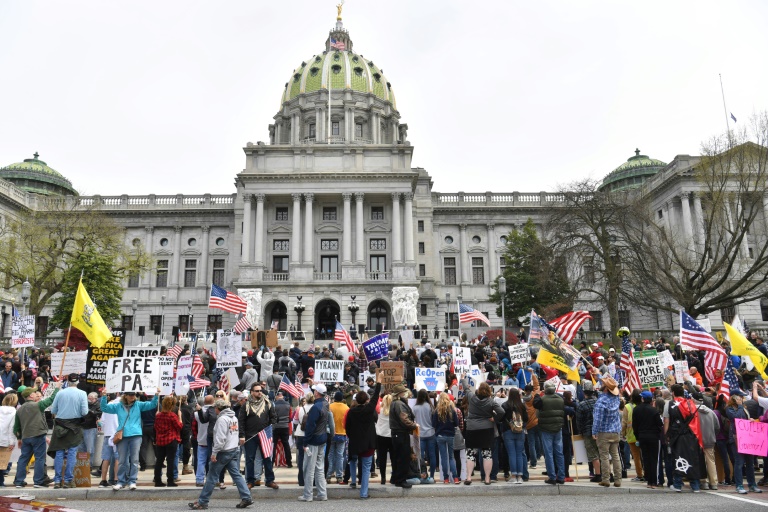 The Chinese COVID virus has turned our country upside down. The unconstitutional lockdown is nothing more than martial law foisted upon us by the elitists and “experts” who pushed forth such outrageous numbers as to place fear into the American people. Using those who are elderly, infirm, or have conditions which can exacerbate the virus as unwilling hostages, the government on both a federal and local level has ignored the constitutional rights of the citizens

The total lockdown of both the economic and social areas of society has done nothing more that extend the period where the virus can spread. We were told it was to “flatten the curve,” allowing our hospitals and health care professionals to keep up. Except for New York, there are very few other areas where this would be a concern. The “experts” have moved forward with even more draconian pronouncements from that point. They use the fear of a second wave of the virus as an implement of fear to quell the uprising that is undoubtedly coming.

Governors have used the pandemic to create unconstitutional regulations that do not have the force of law and are arresting patriots who attempt to question these martial law proclamations. For the first time that I can remember, we have a government that sees no reason to doubt the shelter in place of healthy people. The reasoning they use is that the Chinese virus is so contagious that we must be kept apart to stop the spread. The fatality rate of this virus is on par with the flu. We have never shut down the country for the flu, and even though we have a vaccine for the flu with a protection rate of somewhere between 45-50%, we continue to push forward and grow the economy. In 2018, according to the CDC, there were 80,000 deaths from the flu. I want an explanation of why we were not placed under house arrest last year for the flu? It causes one to think there is more to this than the pandemic that the “experts” and media have hyped so much.

The American people need to look at what we know about the Chinese virus and see what we have learned so far. These are facts according to what we have seen so far. 85% of coronavirus patients have mild symptoms or are asymptomatic. The original studies that showed millions of deaths were made especially high to scare the American people to stay at home. These numbers were compiled by the same “experts” that stated there would be millions of deaths from H1N1 and SERS. Neither was anywhere close to being correct, but it did inflame the people and media to allow the unconstitutional position we now find ourselves in. Hydroxychloroquine has shown great promise as a treatment and preventive measure but has been ignored by the “experts” as not being safe. The “experts” deciding a treatment that has been around since 1952 needs to be tested for safety. Other new drugs with no background to look at are being pushed as the magic bullet to use. Why? That’s simple, even though redemsivir does not work as well as HCQ, it is new, it is patented, and will make both the doctors, Gilead and other producers like Bill Gates money. Where HCQ is sixty cents per pill, redemsivir is over $120.

These are the same people who claim we can’t make our own health decisions but must follow government mandates but says a woman has the right to an abortion. Even they can’t say the

at abortion is not the taking of a life, but when it comes to the opportunities that the pandemic gives them to control the citizens of our country is just too much to turn away. The talking heads throughout the government and health services proclaim they are protecting us from the virus. The questions should be, who is protecting us from them? Who is protecting us from governors who use law enforcement and the Gestapo of the health departments they administer to ensure strict and unwavering compliance from the citizens who they work for? What gives them the right to track our every move, much like the communist governments in Eastern Europe of yesteryear?

They want to be dictators can’t accept that the lockdown has been a disaster. In New York, you can’t sit on your front porch, but you can ride the diseased subway. These dictators can put CIVID infected patients in nursing homes and create a situation where thousands of deaths have increased to the total. Where is the accountability to those who have died because the governors and mayors and local government has been so inept? There must be accountability, with discussion of the ineptness of these mini -fascists who are feeling the power to attempt to destroy this President and country.

I have not seen the rights and liberties of the individuals discussed anywhere in the media. Taking away liberties for the “common good” is something straight out of Karl Marx. The American people do not need the elitist “experts” to tell us what we should do. They don’t rule from on high, and the past has shown that when it comes to the countries health, they have been embarrassingly wrong. There are those out there, including some of our leading “experts” that say the country can’t get to normal until a vaccine is formulated. It is fortunate they did not say the same about AIDS, SARS, MERS, Ebola, or any of the other epidemics that have come to this country over the years. The reason is, NONE OF THE PRIOR EPIDEMICS HAVE A VACCINE.

The virus isn’t a hoax, but it is all the media can hype to keep people inside. The flu is never mentioned. For example, what is the number of deaths from influenza this year, do you know? Of course not. This is for many reasons. First, the media will not report it because they cannot use the flu in an attempt to batter President Trump.  Second, the number for the Covid virus have been inflated by those who have died because of the flu, and by those “presumed” to have died of COVID, even many without testing of any type.

One of the reasons for pushing the Covid numbers higher is because hospitals get paid more for a COVID death that any other form of death. And they get paid even more if the patient is hooked up to a ventilator, which only about 20% survive. A question that must be asked is, why would hospitals be paid more for a procedure that fails 80% of the time?

Another aspect that is being discussed is massive mandatory vaccinations, complete with a “digital certificate” of health. More like a prisoner’s ankle bracelet, it will be used, along with the tracking applications to keep the American people in chains to the federal government.  How long will it be before governors impose rules that you can only work if you can prove you have been tested. Will it go so far as needing this digital certificate to even leave you home. The excuse will be that it is required to protect the masses, but a great portion of those masses have already tested for the antibodies.

It is starting to appear that many progressive socialist Governors are implementing unrealistic goals to once again open their states. It may be their plan to totally devastate the states they are in charge of in order to keep the economy bad to affect the upcoming election. The premise has been shown to not be useful, and along with attempting to create a massive governmental state to permanently make the citizens subservient to the whims to a dictatorial governor. The progressive socialists of the Democrat party want to hire personnel to contact trace and test everyone. We have seen the mountains of money for the unlimited funding of a new surveillance methodology that destroys privacy rights. The leftists are asking for 100,000 to man this new socialist surveillance state, turning the United States into a China clone. During the pandemic, too many in our government, especially of the Progressive-socialist Democrat party, will ignore property rights, individual movement, and freedom of expression, among many others.

The progressive socialists have held up PPP twice. They continue to push to take President Trump out of the office to further the agenda they want, even if it means turning the country into rubble. The leftists have shown indifference to despotism, ignorance of the rule of law, and no loyalty to those who voted them into office. They do their best to force the truth as they see it on others. They have shown that they desire an absence of law and order; they defer from the rules that have been a part of our culture for over 250 years.

It is time to say we will take no more. We will not let the progressive socialists steal our Republic.  The conservative patriots in this country will continue to use their voice. We will fight them at forums and are well prepared to take them on at the ballot box as well. The American people will not let them steal our individuality, independence, or liberties that the Creator has guaranteed us.  Though the Democrats don’t believe in God either, no matter how prayerfully Catholic San Fran Nan tries to tell us that all abortions are allowed.