Why did obama/brennan/clapper/comey want Flynn out of the way? This is why 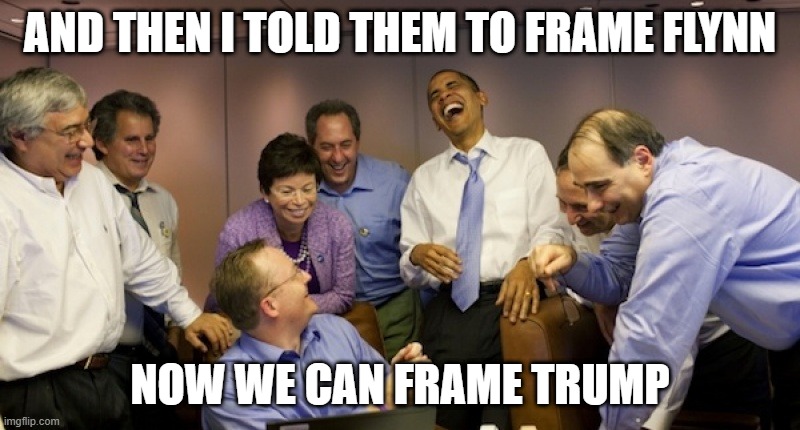 After meeting with Barack Obama on Jan. 5, James Comey set up Donald Trump with a potential extortion threat using the fake Russian dossier. Comey did not tell Trump that Hillary paid for the dossier, saying “it wasn’t necessary for his goal.” The same day Christopher Steele deleted all his emails. Jan. 10 James Clapper orders David Ignatius of the Washington Post to “take the kill shot” on Flynn.

“President Obama began the conversation by stressing his continued commitment to ensuring that every aspect of this issue is handled by the Intelligence and law enforcement communities ‘by the book’.  The President stressed that he is not asking about, initiating or instructing anything from a law enforcement perspective.  He reiterated that our law enforcement team needs to proceed as it normally would by the book.”

Soon after (Jan. 24) Comey sends two FBI agents to interview Flynn about his conversation with Ambassador Kislyak.
They had in hand a transcript of the conversation, which already had been leaked. There was no need to ask him anything about it other than to entrap him. Flynn was never told what the “conversation” with the agents was to be about. In avoiding protocol when sending over the agents Comey violated FBI guidelines. Comey would later brag about it.

The Washington Post reported that the two agents believed Flynn wasn’t lying. Nothing about the call was found to be out of order.

Later their notes were altered to read that Flynn was lying and eventually they too were “lost.”

This is the worst of the FBI and the worst of the government. If they can do this to a 32 year 3 star General they can easily do this to you. Flynn is innocent. He only pled guilty because the FBI broke him financially and threatened to frame his son as they framed him.

So why did the obama cabal so badly want/need Flynn out of the way?

Last night on Tucker Carlson Andy McCarthy offered us a reason ( begins at about16:00) .

“Flynn was not the objective. He was the obstacle.”

The incoming administration was full of newcomers and inexperience dealing with political structure and intelligence. There was only one person with intelligence experience and lots of  it.

He knew how it all worked and in order to be able to complete the plot against Trump Flynn had to be taken out of the way.

“The quarry here is not Flynn, it’s Trump”

Flynn would the ultimately discover the grand plot against Trump and blown the whistle. He had to go. This is also why Obama “warned” Trump about Flynn. It wasn’t for Trump’s benefit.

The only question now is how much obama knew, but there is no doubt he knew.

Which leads to a 2:22 pm message where Peter Strzok notes “7th floor involved”.  That means FBI Director James Comey is now engaged on the issue.

James Comey being actively engaged is important.  Previously Comey said he was unaware of what they were doing…  Additionally this text and activity is January 4, 2017.

The very next day, January 5th, James Comey goes to the White House for a meeting with President Obama and Vice-President Biden.

BTW, Mike Rogers remains a national hero for tipping Trump off to obama spying on Trump.

obama was spying on Trump using the falsely obtained FISA warrants based on the fake dossier without which there would be no approval. That they continued to renew the warrants well after Page left the Trump team tells you what it was all about.

Spying on Trump and trying to find anything they could use to smear him.

You can try to tell me what a jerk Trump is all day long but NOTHING compares to what the obama administration IC did to Trump and his team.