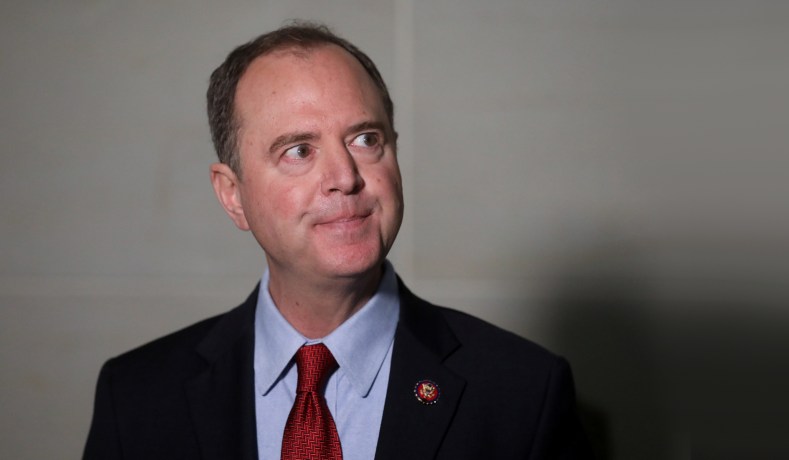 Adam Schiff is a bastard.

He is a conniving, slimy, dishonest piece of filth.

That’s not half of what I wanted to say about him.

The bastard helped to sideline Devin Nunes and Jeff Sessions to keep them from exposing the Russia hoax.

“If the president went further and said to Putin in that secret meeting,” Schiff said earlier in the day on the Senate floor. “I want you to hack Burisma, I couldn’t get the Ukrainians to do it. And I’ll tell you what, you have Burisma, and you get me some good stuff, then I’m going to stop sending money to Ukraine.”

The bastard lied about Carter Page.

The bastard lied about the FISA applications and their abuse.

Nunes and Schiff each wrote memos about FISA. Nunes was right. Schiff was full of schitt.

The bastard lied about his contact with Eric Ciaramella.

The bastard lied about his “ample evidence” in “plain sight.”

Despite his calls for transparency the bastard has done his best to keep his fingers around the neck of the submerged truth, seeking to to kill it.

In late September 2018 with a mid-year election approaching, the often bitterly divided House Intelligence Committee forged a rare bipartisan moment: Its Republican and Democratic members voted to make public the transcripts of 53 witnesses in the Russia collusion investigation.

But what was hailed as an act of transparency has not been fulfilled 19 months later, even though U.S intelligence has declassified and cleared the transcripts for release.

U.S. intelligence officials said Schiff’s request made it impossible for them to declassify 10 of the transcripts, mostly of current and former White House and National Security Council witnesses, because White House lawyers would have had to review them for what is known as “White House equities” and presidential privileges.

But 43 of the transcripts were declassified and cleared for public release and given to Schiff’s team, but they have never been made public despite the committee’s vote to do so, officials said.

GOP lawmakers have emphasized they specifically would like to see the testimonies of key figures like former Acting FBI Director Andrew McCabe and Michael Sussmann, a private lawyer for the Democratic Party, be made public for context and new revelations.

No one knows where they are

In the meantime, Republicans who led the House Intelligence Committee probe in 2018 when the witnesses were interviewed are trying to learn what came of the transcripts.

Schiff’s letter to Coats suggests that at the time the new Democratic chairman was still interested in releasing the transcripts.

“I hope our staff can reach agreement soon on a schedule for returning the transcripts to the Committee for ultimate public release,” he wrote.

Nearly 13 months since the letter, that release has not happened.

Because that bastard knows the transcripts will destroy his Russian hoax chicanery for good. Now he’s in a cover-up of his own.

House Democrats launched into lengthy arguments that broke little ground, if any, in President Trump’s impeachment trial Wednesday — as the head impeachment manager, California Rep. Adam Schiff, suggested that Russians could attack the U.S. and insisted that removing Trump from office was necessary because the integrity of the 2020 election could not be “assured.”

Then in February we had this report

It was likely the bastard who leaked the report, which turned out to be one more falsehood.

Contrary to numerous recent media reports, there is no evidence to suggest that Russia is making a specific “play” to boost President Trump’s reelection bid, a U.S. intelligence official told Fox News on Sunday.

In addition, top U.S. election official Shelby Pierson, who briefed Congress on Russian election interference efforts, may have overstated intelligence regarding the issue when speaking to the House Intelligence Committee earlier this month, the source added.

In the early days of the pandemic, this bastard was focused on one thing only- impeachment.

But then the bastard uncorked this beauty

Former House impeachment manager Adam Schiff said President Trump’s coronavirus response reminded him of the phone call with the Ukrainian president that formed the basis of the president’s impeachment.

“I don’t think we would have ever anticipated that his brand of narcissism and his brand of incompetence, sometimes his brand of malevolence, would be so fatal to the American people,” the California Democrat said on MSNBC.

“But probably, you know, the strongest echo of what we were talking about during the trial was when he was earlier talking about how he didn’t want to return the calls from governors, he didn’t want his vice president to return calls from governors, that weren’t saying nice things about him. That, really, weren’t saying things about him that he could then turn into campaign commercials, as indeed he has. That was such a profound and disturbing echo of what he tried to do with Ukraine.”

“…his brand of malevolence, would be so fatal to the American people”

This is simply beyond the pale. This is not just over the top, it’s over the solar system. Barack Obama did not receive anything close to this level of hyperbolic viciousness from a member of Congress at any time, including during the H1N1 pandemic. It comes from someone who has lied continuously since Trump was elected. This comes from someone who willingly and arduously tried to frame innocent people. Along with his execrable fellow democrats, the bastard has done absolutely nothing helpful to or useful for the nation during this pandemic. All he’s done is politicize the crisis. Every day democrats pray for this misery to continue as it benefits them politically.

My terms for Schiff are more often of the hyphenated variety. I understand your constraints, though.

Have I missed the Democrat outrage over Schiff withholding information from the American public, demanding to know just WHAT he is trying to conceal or has it not begun yet? There have been times when they have been very concerned with such alleged obstruction.

Actually, what is more likely to happen is the Russians will post Facebook ads simply saying, “Democrats, just keep doing what you’re doing! We appreciate it!”

Bastard just doesnt seem to cover it, psychopath is a bit closer but still doesnt quite encompass the willingly perfectly demon possessed character of Schiff. If you told me he bound black escorts and pumped them full of drugs and totortured them as they died, it wouldnt shock me.
Nunes didnt brief his committee about what he was shown on a white house server, well Shiff is on the committee perhaps Nunes knows how deeply Schiff was involved with Glenn Simpson.

@kitt: Republicans and Democrats have seen all this evidence. Republicans want it released, Democrats want it suppressed. How many explanations are there for the differences? There is but one.

Schitthead is the worst type of enemy- the one from within. Him and his comrades are the type of “people” who turn free countries into totalitarian ones. Hopefully one of Nunes’ criminal referrals has this bastard’s name on it.

@another vet: Nunes said 8 criminal referrals including conspiracy. Steels emails were wiped on Jan.5th the same day Susan Rice sent an email to herself saying according to their meeting Barry said to do everything “by the book.”

At least with Schiff we knew what team he plays for. We didn’t know what team Ryan played for until it was too late and the country payed dearly.

@MrToad: Perhaps, but Schiff is engaged in open sedition. It’s nothing short, and it completely fallacious.

@MrToad: Ryan indeed a traitorous bastid infected by being on team Romney.

@MrToad:
in the German language, pencil dick schiff has a name: arschloch. he has engaged in acts of sedition and treason. when this fecal matter, misogynist, democrap from CA. took the oath of office he vowed the following: “I do solemnly swear (or affirm) that I will support and defend the Constitution of the United States against all enemies, foreign and domestic; that I will bear true faith and allegiance to the same; that I take this obligation freely, without any mental reservation or purpose of evasion; and that I will well and faithfully discharge the duties of the office on which I am about to enter. So help me God.”
Likewise the shit squad of four, two radicalized muslin terrorist could not take this oath. do your homework.

@kitt: I think he sent more or is sending more based on what has come out sine then. We’ll see what our two tiered justice system does with it.

@another vet: Some may already be under investigation or duplicates of what Durham is doing. I am not going to hold my breath thats for sure.

Hannah Arendt authored a book entitle The Origins of Totalitarianism. it is an excellent work on the subject. at a meta-level awareness exists when the individual is able to rise above the conflict or crisis and grasp the larger picture was well as the underlying dynamics. No problem can be solved at the level of which it develops. small dick schiff follows the marxist logic of inverting the problem to showcase the ravid needs of the communist party.

Still waiting for his “proof” about Trump and the Russians.