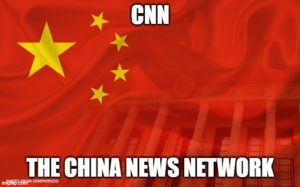 When news of the Wuhan virus broke, most were content to call it what is was- the Chinese Wuhan Virus. Not long after China began its propaganda war as means of distracting from the truth. The left wing democrat-run media soon joined in:

Over the weekend, some members of the American media shared this story with indignation and scorn.  How dare the Trump administration devote resources and effort to a ‘blame game’ with China over the global pandemic?  The strategy was cast as a cynical ploy to deflect responsibility and scapegoat a foreign nation — probably with insidious racial implications, to boot.  Just more pointless, reckless, xenophobic malpractice, they fumed. Note the scare quotes around, ahem, “cover up:”

In other words, the White House would like US officials to tell the established truth (seriously, read this — the empirical reality is not in dispute), in the face of ongoing information warfare from Beijing.  Well, we can’t have that:

A significant chunk of government resources are going toward a racist blame campaign rather than, you know, fixing the pandemic. https://t.co/YKMwM2AOh6

But hold on a minute

The media outcry belies the fact that establishment outlets have also referred to coronavirus, formally named COVID-19, as “the Chinese virus” and “the Wuhan virus.” The New York Times, for example, has used both terms in reference to the virus, but is now painting Trump using the same language as problematic.

Even Chinese state media initially referred to the virus as the “Wuhan coronavirus.”

But that hasn’t stopped both establishment media sources and the Chinese regime from now declaring the terms to be out-of-bounds.

Never mind that Chinese is not a race.

The left wing media took its clues from their Chinese masters:

Racism is not the right tool to cover your own incompetence pic.twitter.com/LmGDyPsULt

The more of this crap you see the more one is tempted to think that the virus was an intentional thing.

This video, from back when the NY Times succumbed to the pressure, explains how China browbeat the world media.

And it just keeps getting worse. China is now citing the democrat-controlled media

If the Chinese Communist Party cites you favorably in one of its propaganda videos, it might be time to take a step back.

Democrats and members of the U.S. news media should be reconsidering their remarks defending and praising China amid the COVID-19 pandemic, especially now that those remarks are being highlighted by China’s aggressive and sophisticated propaganda machine.

The Global Times, a state-run Chinese tabloid, released a video recently highlighting various U.S. media personalities and Democratic leaders, who have pushed the Beijing-approved talking point that it is racist to refer to the virus by its country or city of origin.

Engel said earlier this month in one of the dumber soliloquies ever to grace television screens, “It is easy to scapegoat people, and that is what has always happened when there have been pandemics or epidemics. This is a virus that came from the territory of China but came from bats. This is a bat virus, not a China virus.”

The CCP loves HIllary and DeBlasio

The Chinese propaganda video also features Clinton’s tweet wherein she wrote, “The president is turning to racist rhetoric to distract from his failures to take the coronavirus seriously early on, make tests widely available, and adequately prepare the country for a period of crisis.”

De Blasio is cited in the video saying on social media, in remarks directed at President Trump, “If you’re looking for someone to pin this crisis on, try the guy who made up a phony Google website or promised testing kits that he STILL hasn’t delivered. Our Asian-American communities — people YOU serve — are already suffering. They don’t need you fueling more bigotry.”

A separate video produced by the Global Times highlights CNN’s Chris Cillizza’s claim that the U.S. president is “weaponizing bigotry” to distract from the federal government’s sluggish and unfocused response to the pandemic in America.

The video then questions whether the virus even really originated in Wuhan (it did), again citing Cillizza’s commentary to argue that Trump is using China as a “scapegoat for his government’s slow response.”

“Reelection concerns are driving the Trump administration’s intense attack on China as a ploy to divert public anger over the federal government’s poor controls,” the propaganda video states. “They’ve indeed been quite incompetent. Perhaps they can’t face their public without blaming China.”

Almost as bad as CNN’s promotion of Chinese propaganda is the network’s defense of its decision to run state-sponsored agitprop.

The story was a “single update from our international site’s 24-7 Live Story,” a CNN spokesman told the Daily Caller. He added, “[The story] explicitly states the sourcing as a PLA story and identifies the Global Times as ‘a state-run tabloid.’ That transparency is key as a global news source serving a global audience.”

His explanation, however, contrasts sharply with the fact that CNN has made significant edits to its report following online criticism — almost as if someone realized just how bad it looks for a supposedly serious and free news organization to repeat Chinese Communist propaganda nearly verbatim.

You might even call CNN the Chinese News Network.

It’s not just the news media that China rely upon. Late night hosts have joined the CCP

With Selective Coronavirus Coverage, China Builds a Culture of Hate

Trevor Noah, the host of “The Daily Show,” has won praise on the Chinese internet for his searing criticism of the Trump administration’s mishandling of the coronavirus pandemic. So has Jerry Kowal, an American who makes Chinese-language videos chronicling the dire situation in New York.

China’s response to the virus has its own sharp-eyed critics at home, and they have found a vastly different reception. One resident of the virus-struck city of Wuhan who writes under the name Fang Fang documented despair, misery and everyday life in an online diary, and has endured withering attacks on social media. Three citizen journalists who posted videos from Wuhan in the first weeks of the outbreak disappeared and are widely believed to be in government custody.

It is a sad day when the US media has been first co-opted by the DNC but it’s a terrible day when the DNC-controlled media becomes a subsidiary of the Chinese Communist Party and not only promotes the views of the CCP but actually publishes its propaganda.

The late night trash does exactly what one expects from them.

The DNC and the DNC-controlled media have a voracious appetite for it.

Suggesting that simple facts are racist is, of course, absurd.

I dont find them useful…

The Left (and the press, but I repeat myself) will gin up any twisted figures to try to make the USA look bad.
For instance:

In total number of CASES, sure, we have plenty more cases than Italy, France or Germany.
Even more than all three added together.
BUT talk cases per million people and we do better.

Meanwhile there is not even one brave investigative reporter or elected Dem insisting on finding out what has really gone on inside China.
They all accept China’s “facts” on their face.
No wonder they accept China’s spin about it all being racist on its face, too.

Why would you want to stigmatize Asian-Americans when there is no need to?

The most relevant variable might be one that isn’t generally considered in such nation-to-nation performance comparisons: comparative population densities. All else being equal—which, of course, isn’t really the case—it seems reasonable to think the greater the population density, the greater a nation’s difficulty of controlling the spread of a contagious illness. COVID-19 spreads most easily and quickly wherever people are concentrated in close proximity to one another.

The worst enemy of America is right with us its the Democrat Party these rotten Democrats and the Lapdog Media are Americas biggist enemies we ever had they want Open Borders,A Disarmed American Public and the Paris Accord as well as the New Green Deal the worst enemy we ahve is the Globalists the Chi-Com’s and the DNC as well as the M.S. Media

@Greg: the greater the population density, the greater a nation’s difficulty of controlling the spread of a contagious illness.

Gee, Greg.
Hadn’t you better run that by your old pal, Barack Obama?
He wanted to put all but the farming population of America into high rises inside big cities with 100% reliance on mass transit and recycled air.
Remember?
If Obama had been more successful in making his dream a reality a lot more Americans would be sick or dead right now.