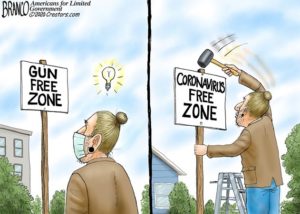 Welcome back everyone! “Spring Break” is over for Little Bob, and I continue to gain newfound respect for parents who home school. Onto the crazy, and it’s a really full plate this weekm starting with a short hop in the Wayback Machine of a few weeks ago:

4/1 – Americans are driving less because of the coronavirus. That’s hurting red-light camera revenue.

This story makes the cut for the #Analysis provided by Ace: (censorship mine)

Just imagine how much of a pinko little b*stard you would have to be to write that article with a straight face.

The Daily Telegraph gives a threatening letter from the Chinese government the resposne it deserves. I wish that the American media MSM had the same cajones, but it’s not smart to bite the people who sign your paychecks. Even if it betrays your country. And the MSM still wonders why us Normals reject them.

4/5 – American Innovation In The Age Of Quarantine

Creative capitalism by a “gentleman’s club”. Because ‘Murica, baby!

4/7 – Militants Fire RPG At C-130 Then An MQ-9 Reaper Crew Promptly Locates, Tracks, And Kills Them

How about some happy news? This should warm everyone’s heart

Yes, I know this was in last week’s TWIRL – thanks for the cross post, Potomac Tea Party!

Another case of Democrats protecting one of their loyal constituents

Sociologist Patrick Bergemann, author of Judge Thy Neighbor, and an assistant professor of organizations and strategy at the University of Chicago, says: “In Nazi Germany, an estimated 42 percent of the denunciations were false. Authorities debated changing the system, but they ultimately decided to keep it because it was great for keeping everyone in line.”

Wouldn’t it be great if Democrats had as much concern for their own citizens as they do for leaders who are sworn enemies of the United States?

4/11 – While you were focused on the pandemic, it was revealed the FBI knew the Steele Dossier against Trump contained Russian disinformation

I’ll be a lot happier if anyone ever goes to jail over this. I’m not holding my breath.

If we do The Cannonball Run I call dibs on having Captain Chaos ride shotgun with me! Which character(s) from TCR would you have roll with you? Despite the title, this post is a pretty grim look at what the recovery will look like.

Things that make you go “Hmmmmm…..”

The Coronavirus has been brnging out the best and the worst in people. I’m grateful that our neighborhood has been one of the good ones, and I hope that yours is as well.

This is a good start! Now if they can address the pandemic of broadcasting fake news!

Yet another day I am grateful that Donald Trump is our president. I highly doubt that had we elected a senile alcoholic back in 2016 Atty. Gen Kamal Harris would be supporting religious liberty.

It’s good to be a Democrat…

4/14 – A Remedial Explanation Of Federalism For Jonah Goldberg

I used to be a big fan of Jonah. Seeing how he & the rest of the Vichy Conservatives have behaved since the rise of Trump makes you wonder how much they were ever on our side in the first place

Got to give credit where credit is due – props to Gulag Barbie for getting one right!

This deserves a post of it’s own, but all I’ll say is that after years of enabling his behavior the Democrats are getting exactly the presidential candidate they deserve in Sundown Joe.

Yes, this is a satire piece from The People’s Cube, but we’ve reached the point where old punk lyrics like “Kill you before we let you hurt each other” sound less and less like satire

Understandable – The Radical Left’s long march through Big Education has been quite successful, and a disruption like this naturally terrifies them

ICYMI – I responded to a Washington Compost editorial written by a young Climastrologist with Actually, the Corona Virus Is Exactly Why We Shouldn’t do The Green New Deal

Perhaps they should ask for checks from the countries of their citizenship?

@CNN changed their headline to protect the Democrats.

They don’t want you to know that Democrats are using workers losing their paychecks as leverage. pic.twitter.com/hbxk62OwW4


I swore I’d never post a distracted boyfriend meme, but there’s a first time for everything pic.twitter.com/La1t6JbdO9


Aren’t you the guy that tried to get someone working for 7.25 an hour fired cause she wouldn’t give you a free toothbrush? https://t.co/mmm6hzIFnl


I am laughing so hard right now. pic.twitter.com/tm8UvptJPI