democrats are motivated not to resolve this crisis, but to prolong the death and suffering 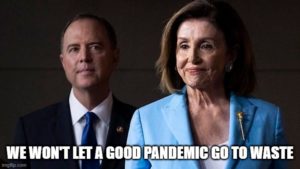 As Rahm Emanuel would say- “Never let a pandemic go to waste.”

democrats are reveling in this crisis. They glory in the country’s misery.

There is no concern for the country, only for power and leverage.

It becomes very apparent with their actions, which speak far more loudly than anything they can say.

Mitch McConnell wanted to add $250 billion more to the Relief Bill and democrats blocked it.

“We need more funding and we need it fast,” McConnell said on the Senate floor, according to CNN.

“I want to add more money to the only part of our bipartisan bill that could run out of money.”

democrats do not see misery and seek remedy- they see opportunity

AUSTIN, Texas — The twin economic shock of the coronavirus pandemic and a collapsing oil market has upended the political landscape in Texas — driving Republicans into an unfamiliar defensive crouch and giving restive Democrats an unexpected election-year lift.

As Joel Pollak put it:

"Bad for America must mean good for Democrats" https://t.co/ba1yxosbHJ via @politico

The outbreak has exposed democrats for what they are, and do not shrug this off. Should democrats take control of this country, this is your future- a country of little tyrants from top to bottom:

We’ve now witnessed local and state governments issue decrees about what people can and cannot buy in stores, arrest parents playing with their children in public parks, yank people off public buses at random, remove basketball rims along with private property, ticket churchgoers, and in one case try—and fail—to chase down a lone runner on an empty beach. All of this, we’re told, is for our own good.

The Wicked Witch of the Midwest:

In Michigan, Gov. Gretchen Whitmer has taken it upon herself to declare what items are and are not “essential,” dictating to grocery stores what they can and cannot sell as part of a sweeping order issued Friday.

Among the nonessential, and therefore banned, items are fruit and vegetable plants and seeds. Never mind that growing fruits and vegetables at home right now would help maintain social distancing during the pandemic, the governor has spoken and her word is law. (Lottery tickets, on the other hand, are still permitted.)

democrats feel empowered to run roughshod over the First Amendment

The most egregious example of this outpouring of authoritarianism was an attempt by Louisville, Kentucky, Mayor Greg Fischer to ban drive-in church services on Easter. On Holy Thursday, one day before Christians were to begin their most important religious celebrations of the year, Fischer declared that drive-in Easter services would be illegal.

To remove all doubt about his seriousness, he also threatened arrest and criminal penalties for anyone who dared violate his order, and in an Orwellian twist, invited people to snitch on their fellow citizens. Fischer justified this by saying it was “to save lives.”

People protesting for re-opening North Carolina (#ReopenNC) are being arrested

NEW: At least one person now under arrest by @raleighpolice for refusing to leave #ReopenNC demonstration outside @ncleg. At its height, there were probably 100+ people at the tailgate-style rally. @ABC11_WTVD @ABC @ABCPolitics #coronavirusNC #StayAtHome #abc11 pic.twitter.com/so9ZIzzqpY

It’s all your own good- which democrats will determine. A vote for a democrat is a vote for totalitarianism.

Arguably, the worst of this is what democrats plan to do with their time. They plan to exploit the misery:

The health of the economy was President Trump’s best argument for reelection just a month ago, but now, in the chaos generated by the coronavirus pandemic, Democrats see it as a weakness to be exploited.

With unemployment soaring and businesses shuttered, Democrats have a new opportunity to attack Trump for what was once his greatest strength. Even if Trump is able to convince voters in the months ahead that he’s handled the public health response to the pandemic properly, he faces the risk that Democrats could successfully blame him for the ensuing economic misery.

You can see that democrats are motivated not to help resolve this crisis, but rather prolong the death and suffering. The left wing media, especially CNN (the China News Network) is in lockstep with the Chinese

The mainstream media has slowly begun to question the Chinese government’s honesty about the country’s management of coronavirus pandemic, but in a blow to independent and impartial reporting, CNN’s chose to publish Chinese government propaganda about its naval capabilities.

China is 100% to blame for this epidemic. 100%. The lies of the CCP have resulted in the deaths of tens of thousands of people in the US and worldwide.

Who do democrats want to investigate? Donald Trump. Adam Schiff:

“It is very important, I think, in reviewing the intelligence component to this to realize the intelligence piece is just one piece of the warnings coming to the administration. A lot of those warnings were in the public domain. They came from public health organizations, like WHO or CDC or his own National Security Council, and ignored those warnings.”

Never mind that the WHO is an arm of the CCP. Never mind that they spread Chinese disinformation which cost thousands of lives. Just this morning, democrats sided with China and the WHO to ding Trump, who plans to cut off US funding of the WHO:

“While we may agree that the WHO has shortcomings that must be corrected, your attack on the global health organization can easily be seen as a deliberate but transparent effort to deflect responsibility for your own failures onto others,” Maloney and Lynch wrote, adding that Trump’s “attempt to blame the WHO for trusting China reflects an astonishing level of hypocrisy given your own fawning and widely publicized praise of President Xi Jinping and his government for their handling of this crisis.”

Despite the fact that the US contributes ten times more to the WHO than does China, China controls the WHO.

Trump set up a Corona Virus task force on January 31. According to Anthony Fauci, Trump immediately accepted every recommendation it made

VIDEO – Dr. Fauci Says President Trump Did Not Delay at All When the Recommendation Was Made To Put in Place Mitigation https://t.co/B7cyBAAB80

democrats know that, but truth is not the goal. A political execution is the goal, country be damned. The health and safety of this country are secondary to the political aspirations of the democrat party. Their actions prove it.

That is absolutely horrible.

I told you they have been driven insane.