Why is is this Virginia School District Promoting Religion and Stealing from the Poor to Pay for It? 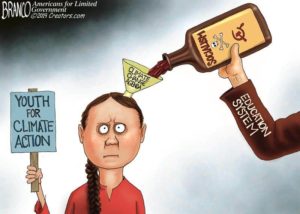 If the title of this post sounds a bit outrageous, it really isn’t when you break down the parts. It all starts with the Fairfax County Public Schools (FCPS) making the recent decision to add electric school buses to its fleet. As their web site reports:

FCPS has been selected to receive funding assistance to purchase eight electric school buses as part of Dominion Energy’s initial deployment of 50 buses across the Commonwealth. These buses will join FCPS’ current fleet of roughly 1,625 diesel-fueled buses.

FCPS was chosen in a competitive process after submitting an application with Dominion Energy during Fall 2019.

Dominion Energy will cover the difference in cost so that school districts pay no more for electric buses than they would for diesel models. Dominion will also subsidize the cost of necessary charging infrastructure.

The School Board’s commitment to environmental stewardship and sustainability are represented in our strategic goals and the work that we are doing with the Board of Supervisors on the Joint Environmental Task Force.” said Karen Corbett Sanders, Fairfax County School Board Chair. “As the largest school division in Virginia, we feel it is critical for us to set an example for our students and our community that we are exploring and implementing as many solutions as possible to combat climate change.”

Electric school buses in FCPS will benefit not only the school division and its community but the entire national capital area as they will help reduce carbon emissions, serve as a resource for national emergency planning efforts, provide stability and capacity to the grid with meeting increasing energy demands, and provide charging facilities for other jurisdictions in the area to use when traveling through Fairfax County.

For the moment, let’s ignore where most of Virginia’s electricity comes from (hint: it’s not solar power and wind mills), nor will we address the fact that car batteries don’t run on sunshine and unicorn breath. Conservation and the goal of polluting less are all well and good, but why are we twisting them to  promote the Climastrology cult? And unlike the facts that there are two genders, unborn babies are fully human, Real Socialism (TM) has failed every time it’s been tried, and Jeffrey Epstein did not kill himself, Climastrology is impervious to science. If this is science, why has nobody declared what the “correct” amount change to the climate is? What is the correct temperature the earth is supposed to be? And how come not one single proposal or mandate contains an actual plan, as in “We need X amount of energy. We’re going to get it from these sources, and here is where the power facilities will be. And this is what they will cost.” For that matter, the vaunted Green New Deal doesn’t even mention what it’s effect on the climate will be!

But enough about the macro level philosophy, let’s look at what this means to Virginians. Earlier I mentioned that Dominion Energy plans to subsidize this measure. The Tyson’s school board raised a few concerns, but was mostly enthusiastic about the project (emphasis mine):

Fox said that Dominion approached FCPS with the initial opportunity and those within the district were enthusiastic to accept the offer. “We are doing it on our dime because we think it is so great,” she said.

An electric bus bill that was originally sponsored by Keam was shut down — the bill that would have allocated more state funds toward this initiative and eased the pressure to involve Dominion Energy, according to Frisch.

“The bill that made it through the House [of Delegates] was a different bill,” Frisch said. “If that’s what ends up becoming law, then our electric school buses will be tied to the hip to Dominion.”

In other words, while Democrats were unsuccessful in forcing Virginia tax payer dollars to go toward this pet project, instead Dominion Energy picked up the tab. So how is this forcing the poor to pay? This subsidy basically amounts to a tax break for Fairfax, which happens to be the second wealthiest county. Not just in Virginia, but in the entire United States. And as we all know from Leftist logic, any kind of tax break that disproportionately affects the wealthy is stealing from the poor. Why are these subsidies not going to help the less affluent counties? If all Virginians pay taxes into Richmond’s coffers, shouldn’t the wealthy pay their fair share and redistribute their wealth to those less fortunate? For all that Leftists claim to care about income inequality, isn’t it time that they walked the walk?

St. Greta Affect Driving Kids Into Careers Telling Other People What To Do https://t.co/MMDkCeFFD8 pic.twitter.com/UFV0xfxh74

I would say that if Dominion Energy can provide the 50 buses and install the energy infrastructure to keep them charged for Fairfax County, their rates are probably too high and energy costs hit the lower and middle class much harder than they affect the wealthy.

I would be willing to bet that none of these climate change advocates know that the sun is getting hotter, that the earths rotation is slowing down or that the moon is moving away from the earth about 1.5” every year.

These basic earth science facts have a huge impact on ‘climate change’ & no one is talking about them.

@Bwax: Well, how can they make any money off of any of that?

Rejected by the school board even when they said it would by a combined Phy-ed period.
They did find a way the poor could get the kids to kindergarten class after passing a prohibition of ice cream sold by the good humor man.

Why are the Dutch so racist?

Don’t greenies all believe that coal powered electric plants create pollution that causes asthma?
And don’t greenies also believe that asthma inhalers are bad for the environment?
So, on top of costing the taxpayers of the entire state of Virginia to benefit only the richest people, there is also the additional cost of more asthma cases from poor neighborhoods nearest Virginia’s power plants.
Lovely……not!

Heh – this was one of the better comment threads I’ve gotten out of one of my posts! I might even get another short post out of the comments here.

And if anyone is interested in following issues with the Fairfax school system, check out this Facebook group