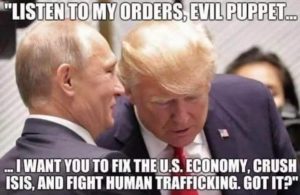 Life sure can take some odd twists.

For more than three years the left has been screaming “Russia! Russia! Russia!” That galactically incompetent former CIA Director John Brennan called Donald Trump a traitor and a Russian agent.

Never mind for the moment that Mueller and his hyper-partisan rabid legal team couldn’t find any such Russian connections. Never mind that all they did was wreck the lives of people who really committed no crimes other than support Donald Trump.

Never mind that for the time being.

WASHINGTON — Intelligence officials warned House lawmakers last week that Russia was interfering in the 2020 campaign to try to get President Donald Trump reelected, five people familiar with the matter said, in a disclosure that angered Trump, who complained that Democrats would use it against him.

The Wrong Way Corrigan of the intelligence community had to weigh in.

We are now in a full-blown national security crisis. By trying to prevent the flow of intelligence to Congress, Trump is abetting a Russian covert operation to keep him in office for Moscow’s interests, not America’s. https://t.co/Vj6lUV5ZNu

Let’s hark back to Brennan’s acumen regarding intelligence. For three years he hammered on Trump but ultimately we learned he couldn’t find his way out of a paper bag.

That’s what former CIA Director John Brennan is blaming for his near-constant attacks on President Trump after Special Counsel Robert Mueller’s probe into alleged collusion between Trump and Russia ended up clearing the president.

Brennan, whose role in the Obama administration helped land him a job as an MSNBC contributor and lent his perspective on national security major gravitas, once warned that the Mueller probe showed “our Nation’s future is at stake.” But on Monday, a day after Attorney General William Barr released a summary of Mueller’s findings, showing there was no evidence Trump or anyone close to him colluded with Russia to steal the 2016 election, Brennan admitted he may have gotten it wrong.

“I don’t know if I received bad information, but I think I suspected there was more than there actually was,” Brennan told MSNBC’s “Morning Joe.”

Sally Yates, who engineered the framing of Michael Flynn, also jumped into the pond

This is a screaming red siren, but in the daily barrage of crazy, can we hear it?Trump is not only trying to rewrite history of Russia’s intervention in 2016, he is now using the power of the presidency to conceal their 2020 scheme to re-elect him.Dangerous! https://t.co/Fs5SCxL1yw

Neither of them paused for even a minute to scrutinize the story, but such was the quality of what went for intelligence in the obama regime. On Twitter, Shem Horne destroyed the story. He reiterated what we’ve said here repeatedly:

Further, absolutely no proof was offered 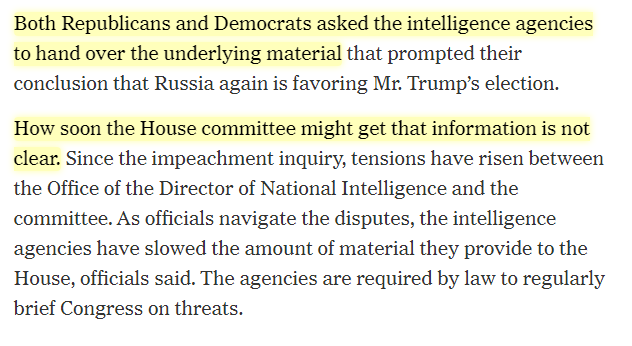 Well that article was absolutely worthless 😂. There’s literally no proof in there to support the claims that Russia is trying to help President Trump, they admit there’s no new information at all, and they admit there was no evidence presented for the old claims. Wew. Pathetic.

Shockingly, Jake Tapper did much the same thing on Twitter

A national security official I know and trust pushes back on the way the briefing/ODNI story is being told, and others with firsthand knowledge agree with his assessment. “What’s been articulated in the news is that the intelligence community has concluded that the Russians are trying to help Trump again. But the intelligence doesn’t say that,” the official says…“The problem is Shelby” — Pierson, the elections threats executive in the intelligence community — “said they developed a preference for Trump. A more reasonable interpretation of the intelligence is not that they have a preference, it’s a step short of that….“It’s more that they understand the president is someone they can work with, he’s a dealmaker. But not that they prefer him over Sanders or Buttigieg or anyone else. So it may have been mischaracterized by Shelby” at the House Intel briefing last week…

Like I said, such is the quality of the Intelligence Community under obama.

But let’s forget all that for a moment. Let’s assume that Trump is a Russian asset. If he is, then we need to thank Putin. Putin seems to have the best interest of America at heart. He wants to have US trade to be conducted on a level playing field. He wants the US stock market to roar. He wants a robust US economy. He wants the US to begin to get out of endless wars. He wants a strong America.

Lots of labor force dropouts under Obama, especially disabled ones, are getting back in the game. About a third of new hires are coming from the ranks of people previously non-employed due to disability. || via @voxdotcom @ernietedeschihttps://t.co/cWChhAu5tw pic.twitter.com/JV4zgixfeq

So we really ought to welcome this interference. It’s in the best interest of the United States.