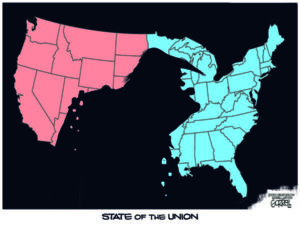 First off, I have no delusions that President Trump is another President Lincoln. Both are incredibly consequential presidents, although in very different ways. For example, I doubt Lincoln would have had fun sending Democrats into a froth mouthed frenzy for racing his horse and buggy for a lap at The Daytona 500. But the comparison has to come up given how every so often we hear about how the country is headed for another Civil War. This article in the American Thinker makes a great case that it actually started days before President Obama was sworn into office. What’s interesting is how much we see in the articled mentioned that’s taking place today – it was written a year ago.

That said, I’ll get to my point a lot quicker than faithful readers are used to when I write posts with some crazy claim in the title. Thankfully, the “Trumphitler” claims have mostly flamed out, as once proven unsuccessful Leftists simply pirouette to the next slander, white supremacist, Russian asset, etc. I never put much stock in the various name calling, as Leftists are always going to hate whichever current Emmanuel Goldstein they’ve been told to hate. Of course, they conveniently overlook the biggest parallel, comparing how the 1930’s National Socialist German Workers’ Party treated political rivals and what we saw happen in 2016.

As for Lincoln? Let’s look at the eerie similarities:

President Trump was preceded by a Democrat who tore this country apart.

So was Lincoln. (In Buchanan’s defense, his more due to incompetency, and not a stated goal)

Lincoln had to deal with a secession movement backed by a foreign power.

So has President Trump.

With the end of the Civil War, racist white Democrats wearing white robes and hoods wanted to have black Americans disarmed.

Damn. That was almost too easy.

Still at it today? Check.

Violence against people who have the audacity to disagree with Democrats? Yep, this is old hat.

And of course, we have no shortage of it today.

While out in Portland, this happens so often I’m surprised none of the local papers have a section dedicated to this topic.

I’m sure that there are more examples, but this is all I can think of for now. Drop any I missed in the comments section below!

One last note, if  another Civil War happened, it would not go how The Radical Left thinks it would. Two years ago Kurt Schlichter gave one of his great sarcastic,mocking, yet reality founded take on the topic. Or years ago, Dave Barry wrote a great piece saying that if the Civil War were refought, the South would win this time due to their numerical superiority in the category of pickup trucks with gun racks. It’s tough to argue that point…