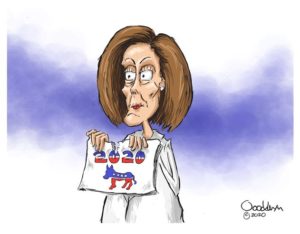 Happy Valentine’s Day! Hopefully today you’re focused more on someone awesome in your life instead of being angry that this day might alienate creepy dudes who are angry that straight men don’t want to sleep with them. Yes, seriously.  That said, let’s go on to this week’s list of reasons The Radical Left hates us Normals:

I disagree with the premise here. This pulls off the mask and shows that The Radical Left is uninterested in solutions that don’t involve handing them control.

If I drank coffee I’d add Starbucks to the list of companies I choose to ignore.

2/9 – Women Should Never Vote For A Democrat Candidate

Another premise I reject, only because men should never vote Democrat either.

At what point do the citizens have some recourse against the Mayor and the Portland PD for not protecting its citizens?

2/11 – The Real Gender Gap Is ‘The Boy Crisis,’ and Democrats Are Making It Worse

As someone with a young son this issue is on my radar big time. I’m just grateful that we’re at the point where it’s well known and calling it out doesn’t get you labeled a conspiracy theory.

2/12 – Where was the media on this act of political violence?

Like any story, especially violence, that doesn’t fit their narrative, the cowards in the profession formerly known as Journalism will ignore it.

If this sounds unreasonable, let me frame this for you from a private sector perspective. This was also useful during the Bill Clinton impeachment back in the day1:

If your company gets bought out and you don’t like the way the new boss is doing things, you can speak up that you don’t like it. From there, your two options are to do what you’re paid to do or quit. As strange as this may sound, most employers don’t like having staff members who are trying to sabotage the company’s strategy.

Probably not the best proposal for Leftists to oppose…

From the archives, a Valentines Day two-fer! First, we look at the stupidity of “affirmative consent in Maryland Democrats’ Anti-Dating Legislation – Happy Valentines’ Day! The second is from five years ago and is probably still the most fun post to write I’ve published. Want to have fun laughing at The Radical Left’s insane ideas of dating? Of course you do! Click here: Seeking a Feminist Boyfriend in the Bubble of Our Nation’s Capitol

1 The example of Bill Clinton that I used to explain to the “What’s the big deal?” crowd was to explain that out in the private sector if I got caught violating an intern on company I’d get fired on the spot. No appeal, and I wouldn’t get to have my wife lie on national TV on my behalf.

You’ll also be pleased to know that Jane was transported to the ceremony in a sedan chair carried by immigrant children raised on a vegan diet and fully schooled in intersectional feminist theory. https://t.co/BDKEbk2fDR

I've got to admire Joe's restraint in limiting his campaign to Hellfire missiles and air strikes, unlike the Curtis R LeMay of gun control, Eric "Nuke Omaha" Swalwell

Roses are red
Violets are blue
I'd give you my love
But romance is a heteronormative myth perpetrated by the patriarchy.#HappyValentinesDay