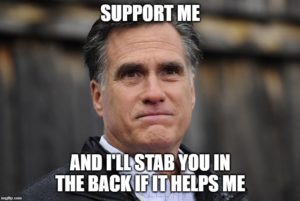 Pierre Delecto has decided to vote to convict Donald Trump,

“The president is guilty of an appalling abuse of public trust. What he did was not perfect. No, it was a flagrant assault under electoral rights, our national security and our fundamental values,” he declared.

after much handwringing and a consultation with God

I don’t believe that for a second.

Lots of theories have coursed through the internet as to why Romney would take this action.

I believe Mitt Romney is motivated by bitterness and jealously that @realDonaldTrump accomplished what he has failed to do multiple times. His desire to pander to the chattering class has gotten the best of him…again.

That’s very reasonable. But here’s a biggie. Mitt’s former campaign national security adviser is on the Board of Directors or Burisma, of Hunter Biden fame.

Joseph Cofer Black, a national security adviser for the 2012 Mitt Romney campaign, sits on the board of directors of Burisma Holdings, the Ukrainian oil and gas giant that paid at times more than $83,000 per month to Hunter Biden, former Vice President Joe Biden’s youngest son.

The American Thinker, which first brought the story to light, noted it is “an odd coincidence that Mitt has as CNN puts it ‘been a lone Republican voice expressing concern about President Donald Trump’s July phone call with Volodymyr Zelensky in which Trump asked Ukraine’s President to investigate former Vice President Joe Biden and his family.’”

In October 2011, Romney announced that Black, who had served in the CIA since 1974, had been selected as a special adviser.

“I am deeply honored to have the counsel of this extraordinary group of diplomats, experts, and statesmen,” Romney said at the time. “Their remarkable experience, wisdom, and depth of knowledge will be critical to ensuring that the 21st century is another American Century.”

Seems that Burisma wanted to buy influence with more than just Joe Biden.

Romney did get Schiff’s endorsement. Then again, Trump is more popular in Utah than is Romney.

Now let’s crank up the Wayback Machine to 2016 and see what Romney had to say about Trump:

Here's what I know. Donald Trump is a phony, a fraud. His promises are as worthless as a degree from Trump University. (1/2)

Romney is no Amazing Kreskin

Trump relishes any poll that reflects what he thinks of himself. But polls are also saying that he will lose to Hillary Clinton

.@MittRomney has announced he is running for the Senate from the wonderful State of Utah. He will make a great Senator and worthy successor to @OrrinHatch, and has my full support and endorsement!

And how does Romney repay that support?

Stab Trump in the back. It is vintage Romney.

I expect that next Romney will switch parties and complete his journey to the dark side. The one thing that Romney does best of all is lose. Then again something that Steve Guest posted on Twitter has a point.

Despite abandoning his constituents and voting with Democrats, the left will hate Mitt Romney by next week.

And now by turning his back on @realDonaldTrump and Republicans, Mitt Romney continues his long career of disappointing Republicans.

He’s probably right. Romney now will live in the political twilight between light and dark, hated by both parties. Expect Romney to vote against the next Trump SCOTUS nominee as well.

And Manchin is likely politically dead