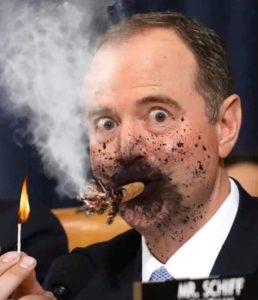 By now you know that Adam Schiff is a chronic liar but you might not know how pervasive his lying is. At Real Clear Politics Frank Miele captures Schiff quite succinctly:

You can take your pick for the most famous liars in history — people who are willing to say anything for the sake of gaining and keeping power — but surely Rep. Adam Schiff has earned a place on that list.

I won’t call Schiff a “congenital liar” — as Fox News personality Sean Hannity does nightly — but only because the term excuses Schiff of personal responsibility for his behavior. I don’t think it was his genes that made Schiff into a consummate liar but rather his narcissistic personality.

Watching Schiff spin his yarns as chief House manager for the impeachment trial of Donald J. Trump reminds me of the great dissemblers of Shakespeare, such as “Honest Iago,” who is only comfortable in his own skin when he is making the skin of others crawl. The “motiveless malignity” that poet Samuel Taylor Coleridge ascribed to Iago is writ large in the perfunctory perfidy that Schiff practices with unassuming ease. He would destroy a king, but he assures us he takes no pleasure in it, wink-wink, nod-nod.

Yes, Adam Schiff is a monstrous liar. You will remember him fabricating out of whole cloth the conversation between Donald Trump and Volodymyr Zelensky, entering it into the official record in the House.

Later he would call it “parody.”

The last four years have been a novel of Schiff lies

Mr. Schiff also quoted Mr. Steele on a purported conspiracy between campaign chairman Paul Manafort and Mr. Page: “According to Steele, it was Manafort who chose Page to serve as a go-between for the Trump campaign and Russian interests.”

Independent evidence shows the two never knew or spoke with each other.

When Mr. Page later appeared before the committee, Mr. Schiff repeatedly quoted the dossier in questioning the former aide, forcing him to disprove what Mr. Steele had written.

He claimed repeatedly that he had secret evidence of Russian collusion “in plain sight”:

Mr. Schiff said several times that he had seen evidence of Trump-Russia collusion to interfere in the election and it was beyond circumstantial.

He began this talking point in March 2017.

“I can tell you that the case is more than that,” he said on MSNBC. “And I can’t go into the particulars, but there is more than circumstantial evidence now.”

Special counsel Robert Mueller said in his March 2019 report that he did not find a Trump election conspiracy. No Trump associate was charged in such a conspiracy.

Then there was the battle over FISA abuse

“FBI and DOJ officials did not ‘abuse’ the Foreign Intelligence Surveillance Act (FISA) process, omit material information, or subvert this vital tool to spy on the Trump campaign,” he said.

Not true, said Mr. Horowitz. None of Mr. Steele’s reporting in the warrant was ever corroborated. In fact, FBI agents acquired evidence from Mr. Steele’s main source, who placed great doubt in Mr. Steele’s allegations. But the FBI left this evidence out of subsequent warrant renewals.

He accused Trump of money laundering

“During the prior Congress, the Committee began to pursue credible reports of money laundering and financial compromise related to the business interests of President Trump, his family, and his associates,” Mr. Schiff said.

By the time Mr. Schiff wrote this anti-Trump agenda, Mr. Mueller had completed his investigation and found no election conspiracy. There is no hint in his report of money laundering.

In 2017 and 2018, committee Republicans said that Mr. Schiff’s side leaked a number of bogus stories, such as Russian Facebook ads in Wisconsin and Michigan, and Donald Trump Jr.’s communication with WikiLeaks.

There’s even more at the link.

After defending spying by Obama on the Trump campaign, Schiff said investigating a Presidential rival is wrong.

Schiff claimed the evidence the House committee had on Trump was “overwhelming” and “uncontested” but then asserted more witnesses were necessary because the Senate could not just “rely on what was investigated in the House.”

Schiff has frequently demanded that witnesses be allowed in the Senate in order to assure a “a fair trial.”  He went to Harvard law school and apparently graduated but seems not have any understanding of the American legal system. In this country a fair trial is fair to the accused, not to the prosecution. And as I wrote previously, nowhere in the legal system is it stipulated that defendants must provide witnesses for the prosecution after the prosecution chose not to pursue them. Schiff had his chance to have witnesses. He and Nadler demurred. That’s no one else’s fault and it is NOT the obligation of the President’s team to correct their blunder.

Schiff is a former Federal prosecutor. That’s particularly frightening as it makes one wonder just how many innocent people are behind bars consequent to Schiff lies.

Sitting shoulder to shoulder on the Senate floor as they argue for the president’s removal from office, two men — Adam Schiff of California and Hakeem Jeffries of New York — have been catapulted to the front of the nation’s consciousness, to the top of the Democratic Party and have become the fulcrum for speculation about a host of prominent positions both in the House and beyond.

One of the only real hard facts out of the impeachment is just how grandiose a liar Adam Schiff is. It’s a bad time in this country when being an inveterate liar in a trial makes you a superstar. If and when the Senate gets around to it, they should entertain witnesses to testify- with Adam Schiff being number one.

I am so pleased that this impeachment nonsense has blown up in his face. He’s done a lot of damage this country.