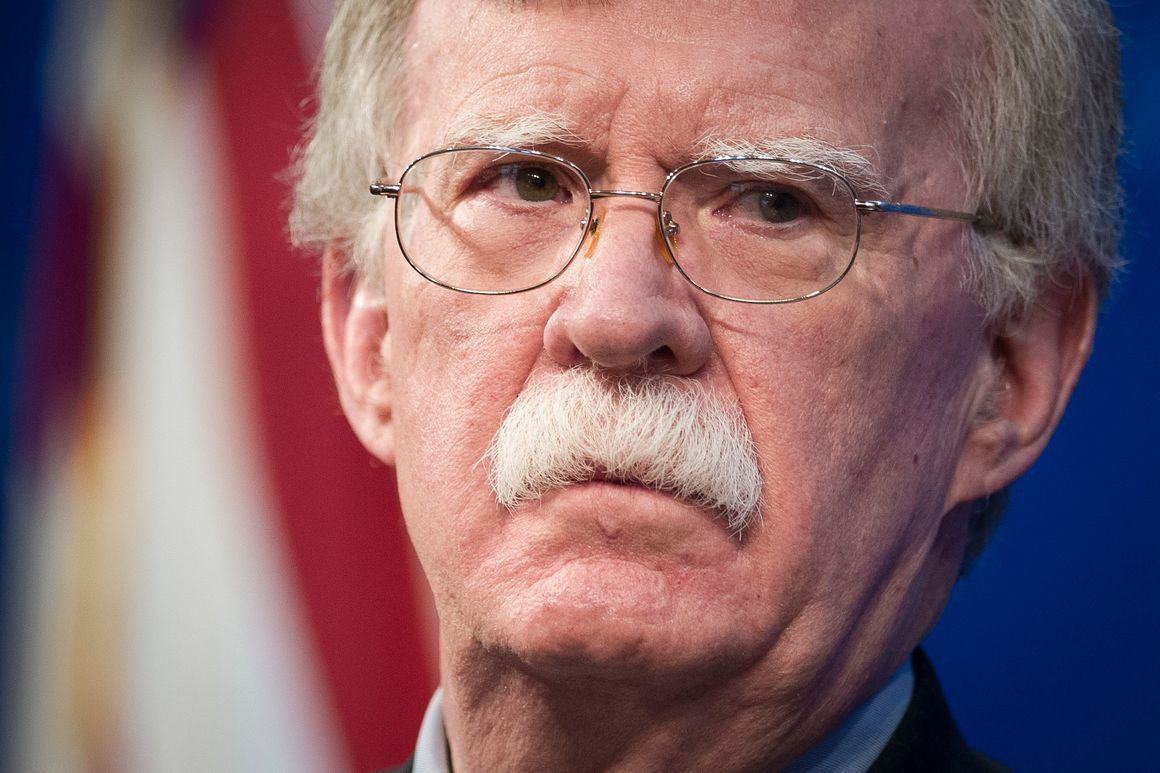 You might remember that during the Brett Kavanaugh hearings democrats were constantly finding “new” evidence and last second witnesses. Just when a witness was dealt with and it was time to move on, democrats would magically “discover” another witness, each succeeding one less credible than the last. Julie Swetnick was the classic example.

Well, it’s deja vu all over again. We have a new magic act at hand.

Back in October we learned that former National Security adviser John Bolton was writing a book about his time in the Trump administration.  Publication was said to occur prior to the 2020 election.

It seems that date has been moved up significantly.

All books involving White House personnel need to be vetted by the National Security Counsel. Not all are leaked, but Bolton’s book was leaked to the NY Times by the NSC.

The accounts of this are all over the place. Bolton’s lawyer released this statement

On December 30, 2019, I submitted, on behalf of Ambassador Bolton, a book manuscript to the National Security Council’s Records Management Division for standard prepublication security review for classified information. As explained in my cover letter to Ellen J. Knight, Senior Director of the Records Management Division, we submitted the manuscript notwithstanding our firm belief that the manuscript contained no information that could reasonably be considered classified and on the assurance that the ‘process of reviewing submitted materials is restricted to those career government officials and employees regularly charged with responsibility for such reviews’ and the ‘contents of Ambassador Bolton’s manuscript will not be reviewed or otherwise disclosed to any personals not regularly involved in that process. A copy of my December 30 letter is attached. It is clear, regrettably, from The New York Times article published today that the prepublication review process has been corrupted and that information has been disclosed by persons other than those properly involved in reviewing the manuscript.

The NY Times continues to report that a copy was circulated to many people:

Not so, says Bolton’s lawyer:

“The ambassador has not passed the draft manuscript to anyone else. Period.”

You need to know that the person in charge of reviewing such publications is Yevgeny Vindman.

The brother of Alexander Vindman. As in motive and opportunity.

Also in the NY Times report:

WASHINGTON — President Trump told his national security adviser in August that he wanted to continue freezing $391 million in security assistance to Ukraine until officials there helped with investigations into Democrats including the Bidens, according to an unpublished manuscript by the former adviser, John R. Bolton.

The president’s statement as described by Mr. Bolton could undercut a key element of his impeachment defense: that the holdup in aid was separate from Mr. Trump’s requests that Ukraine announce investigations into his perceived enemies, including former Vice President Joseph R. Biden Jr. and his son Hunter Biden, who had worked for a Ukrainian energy firm while his father was in office.

Again, not so fast. This is phrased carefully to look like more than it is.

“Preferred” being the key word here. In any case, the aid was sent on and there was no deal. No investigation. Trump sought materials they already had – not a new investigation.

Now the rest of the story and there’s less there than meets the eye.

The plot here could not be any more obvious. 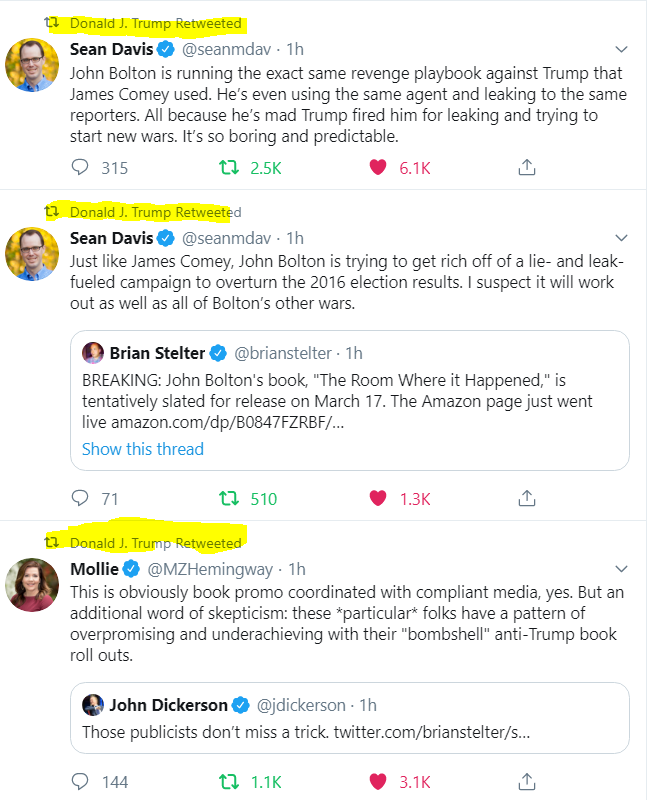 And the icing on the cake comes from Sara Carter:

How to pre-sell a book
(ALL IN ONE DAY):

– #JohnBolton team denies the "leak", blames #NSC as "corrupt and prone to leaks"

The “manuscript” was leaked in a timely manner for the purposes of bolstering democrats’ demands for witnesses, to boost book sales and to offset the butt hurt inflicted on democrats last Saturday. This is the democrat Kavanaugh playbook once more and John Bolton is Julie Swetnick II. Bolton has made himself radioactive among Republicans. democrats will buy his book, but not many of them.

democrats will today again whine about witnesses, Bolton in particular. They had their chance. It was widely discussed and they opted not to call him. Republicans should respect that choice.

I would look to Bolton signing with either CNN or MSNBC, holding hands with either the execrable Nicole Wallace or the buffoon Brian Stelter. It’s where he belongs.

@Richard Wheeler: Who can not vote to stop animal torture? so what disaster? like in NY ?</a
If you wish upon a starrrr, doesnt matter who you aaaare.

@Richard Wheeler: Logical people wonder how Democrats can oppose torturing animals but support aborting a full term baby and leaving it to die on a cold table.

That’s called mishandling and destroying top secret information, and it’s a federal crime. The Russians would have had nothing to leak if Hillary wasn’t corrupt. It’s her fault.

It was not her election to lose, as many in the media tried to propagate. She had made a deal that they’d give her the nomination in 2016 if she’d step aside for Obama in 2008. She did, and expected to be President in 2016. No one seems to know that.

There’s a simple solution. Call in the witnesses Trump blocked and the truth will be known, one way or the other. If you want to add Hunter Biden to the list, go on ahead.

Hunter, Joe, Schiff, and the whistleblower.

Once we know who the whistleblower is, this is all over.

That would be fair.

@Nathan Blue: I dont think the Senate wants to set a precedence of the house making accusation for them to both prove it and be the court to try it.

Login
wpDiscuz
56
0
Would love your thoughts, please comment.x
()
x
| Reply
‹ Back to Categories