democrats promise impeachment as sole 2020 platform and beyond 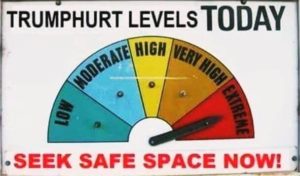 democrats have unveiled their 2020 campaign platform. It is exactly the same as 2016 and 2018 platforms. Hate Trump.

As a preview, Mad Max(ine Waters) has promised that impeachment will be a perennial process for democrats.

Napoleon Bonaparte is said to have remarked

“In that case, let us wait twenty minutes; when the enemy is making a false movement we must take good care not to interrupt him.”

democrats are making a yuge mistake. ABC contributor Sara Fagen notes that the country has moved on, but democrats have not.

Jonathan Swan observed that the growing backlash is helping the GOP

democrat House impeachment managers filed a brief demanding that the “threat of Trump” be ended in a 111 page treatise of butt hurt.

House impeachment managers released their opening trial briefing on Saturday, claiming the evidence against President Trump “overwhelmingly” establishes that “he is guilty” of abuse of power and obstruction of Congress, and the only question that remains is whether the Senate will carry out its duty to remove him from office.

“President Trump’s conduct is the Framers’ worst nightmare,” the impeachment managers wrote in their 111-page filing.

In what has become a trial be farce, democrats are throwing the kitchen sink at Trump. They are asserting that Trump attempted bribery, despite it not being included among their flimsy articles. When asked why not, the response was “never mind.”

Rep. Jason Crow, D-Colo., one of the seven Democratic impeachment managers prosecuting President Trump before the Senate, accused Trump of attempting to commit bribery in his dealings with Ukraine, but when asked why this was not one of the articles of impeachment, he did not appear to have an explanation.

Bribery is one of the specific offenses mentioned in the Constitution’s discussion of impeachment. The House impeached Trump for alleged abuse of power — itself is not a statutory crime – and obstruction of Congress, but Crow insisted Sunday that the president was still guilty of attempted bribery.

Keilar pointed out that the House could have gone with both abuse of power and bribery if they believed the facts supported it, and that one of Trump’s attorneys, Alan Dershowitz, plans on arguing that abuse of power itself is not sufficient grounds for impeachment.

When asked if it was a mistake not to include a bribery article, Crow stated, “No, absolutely not.”

What this demonstrates beyond question is that democrats are seeking to remove a President via innuendo. Both Alan Dershowitz and Andy McCarthy agree that there are no indictable offenses. There are no crimes.

Countering democrat assertions, Trump’s legal team has filed a letter with the courts arguing the democrat articles are constitutionally invalid.

President Donald Trump’s legal team argued Saturday that the impeachment articles sent to the Senate by House Democrats are “constitutionally invalid” and should be rejected.

The letter was authored and filed by Trump’s attorneys Jay Sekulow and Pat Cipollone in response to the Senate summons for the impeachment trial.

“The articles of impeachment are constitutionally invalid on their face,” the response read. “They fail to allege any crime or violation of law whatsoever let alone ‘high crimes and misdemeanors’ as required by the Constitution.”

The legal team released its blistering six-page response to the summons on Saturday evening.

“The articles of impeachment now before the Senate are an affront to the Constitution of the United States, our democrat institutions, and the American people,” the letter read.

But wait long enough and the evil that lives in people will find its way out. Steny Hoyer made some comments which should frighten every American and they tell us more about democrats than anything else:

Hoyer, the number-two Democrat in the House, defended the House’s impeachment inquiry last month by remarking that Trump was afforded “every opportunity to prove his innocence.”

This is the warped, distorted world of democrats. You are guilty until you prove your innocence. For the life of me I cannot understand why anyone would vote for those who have such an anti-Constitutional, anti-American beliefs.

As bad as it is for the country, impeachment is highly likely to be very, very costly for democrats. They are going to lose the war. As much as Pelosi gloats that Trump is “forever impeached” it is also true that this impeachment is the only 100% partisan with zero crimes included among the articles impeachment in history.

And acquittal will be forever as well.

The longer this plays out, the less appetite American will have for it. The longer democrats engage in this ridiculousness, the less they work for the American people. That spells LOSER.