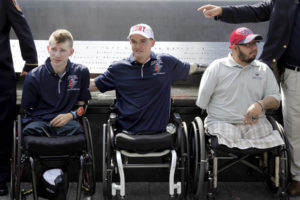 The outpouring of grief over the death of Qasem Soleimani is overwhelming. Protests are happening in many places. There is open weeping on TV. There are comparisons to the loss of great historical figures.

And that’s just the democrat party. There’s almost as much sadness in Iran.

When you see a Wounded Warrior Project commercial, you are looking at the handiwork of Qasem Soleimani. Soleimani killed over 600 soldiers and Marines and maimed thousands more with the EFP’s he furnished to Iraq and Afghanistan. Limbs were blown off, eyes destroyed, lungs burned.

Soleimani helped plan the attack on Benghazi– you know, the one the Obama administration said was spontaneous and caused by a video.

Soleimani’s evil is the stuff of legend

In 2015 I went to Iraq to report on the state of ISIS after one year had passed since they unleashed a murderous reign of violence against the Iraqi people.

I met the family in the above picture at an IDP camp outside of Erbil, Iraq. The father explained their desperate situation, homeless because of the latest ISIS reign of terror.

His body was severely burned, his son lay silent on the cot in the tent. When we asked about these things, he explained how Iranian Shia militias had killed his wife, tortured him and his children, including his young boy. The militias, who would have been under the control of Qasem Soleimani, proceeded to drill holes in the boy’s legs as a means to further threaten the father.

The boy stared silently at the ceiling, seemingly void of all emotion. Dad explained that he still has nightmares daily, and often soiled himself because of them.

Listening to the details of such horrific violence and seeing the results of it face to face was hard enough to go through. One can only imagine what it was like to actually live it.

democrats assert that they, Soleimani and Iran are the victims.

Poor Ilhan Omar is suffering from PTSD. Not surprisingly, she sides with Iran

“This administration says starving the Iranian economy is in defense of human rights, when it is an abuse of them,” Omar said Thursday afternoon. “That withdrawal from the nuclear deal was a demonstration of American leadership when it is an abandonment of it.”

“Escalation is deescalation. War is peace,” she added. “In fact, they’re asking us to deny reality.”

“You know, when some people die, you don’t know what the impact is going to be,” Matthews began telling a panel. “When Princess Diana died, for example, there was a huge emotional outpouring, Elvis Presley in our culture. It turns out that this general [President Trump] killed was a beloved hero of the Iranian people.”

Bernie Sanders lamented the loss of Soleimani, saying “call him what you want”

Sanders would gave similarly defended Hitler and Stalin. Elizabeth Warren and Bernie Sanders will host a phone call with a pro-Tehran lobbying group.

Democratic Congresswoman Pramila Jayapal defended Iran, saying that “had we not assassinated General Soleimani…we would be in a safer place,”

That’s because it’s not her ass at risk of being blown into hamburger.

An Iranian journalist is begging the US not to fall for the Iranian propaganda:

“Don’t believe Iranian propaganda about the mourning for [General Qasem] Soleimani.” That’s the message or plea from Iranian journalist and activist Masih Alinejad published by The Washington Post on Monday. Unfortunately, as NewsBusters reporting on the liberal media’s reaction to Soleimani’s demise has shown, they were not heeding her warning and were willingly becoming mouthpieces for the murderous regime.

Many Iranian so called “mourners” were not grieving voluntarily:

Without doubt, Soleimani had support among hard-liners and regime loyalists. The regime is not taking any chances, though. In the city of Ahvaz, where large numbers of people turned out to mourn Soleimani, the government has forced students and officials to attend. It provided free transport and ordered shops to shut down. According to videos sent to me by people inside the country, the authorities are making little kids write essays praising the fallen commander. First-graders who didn’t know how to write were encouraged to cry for Soleimani.

Lara Logan, who has extensive experience in the Middle East- some truly unfortunate- is aghast at the reaction here:

“It is kind of depressing,” Logan replied. “I’ve been a journalist for more than 30 years and I’ve never seen anything like it. What about the voices of the Iraqi people? What about the voice of the Syrians and the Yemenis and all the people across the region who have been celebrating Soleimani’s death? You won’t see them on the streets of Tehran. You are not going to see this great display because they are afraid. They are so afraid of what the proxy forces, the revolutionary guards are capable of.”

Such is the hatred of Donald Trump that democrats and the media have abandoned reality entirely.

Led by Nancy Pelosi the House passed a non-binding meaningless motion demanding that Trump seek the approval of Ilhan Omar and Rashida Tlaib before taking any military action. It’s not hard to imagine Adam Schiff, Omar and Tlaib calling Soleimani directly during such a briefing and warning him of the impending attack.

Pelosi didn’t always believe that a President should be hamstrung:

When obama was President, it was just fine for him to conduct a full blown war, overthrow a government and cause the death of its leader.

Barack Obama authorized 563 drone strikes without Congressional approval, killing as many as 800 civilians and four Americans.

Let us also recall the Obama Doctrine according to John Brennan:

Some critics argue he should have had a few second thoughts about what they see as the overuse of drones. But John Brennan, Obama’s CIA director, told me recently that he and the president “have similar views. One of them is that sometimes you have to take a life to save even more lives. We have a similar view of just-war theory. The president requires near-certainty of no collateral damage. But if he believes it is necessary to act, he doesn’t hesitate.”

Obama’s Head of Homeland Security Jeh Johnson said Trump had all the authority he needed to eliminate Soleimani:

“What I have said is that under existing [Justice Department] Office of Legal Counsel [OLC] opinions on the president’s constitutional authority to engage the armed forces without a congressional authorization, if you read those opinions, he had ample constitutional authority to take out General Soleimani, if you regard that as an isolated strike. What these OLC opinions say is that the president can take lethal force so long as it’s short of war if it’s in the important national interest. And this and this operation was.”

And to the chagrin of democrats, Trump is not seeking a war.

Appearing on “Fox & Friends” with hosts Steve Doocy, Ainsley Earhardt and Brian Kilmeade, Mast said that he felt compelled to deliver his speech on the House floor on Thursday – discussing the War Powers Resolution passed later that evening – because lawmakers “need to be comfortable with the fact that we are justified to remove [terrorists] from the battlefield.”

“And, this is a common theme from the left, these American apologists that like to go out there and say that because America did something this resulted in some other country going out there and taking some unnecessary actions, some ill-fated action,” said Mast. “And, it’s not the Americans’ fault. It’s the fault of those that went out there and took those actions themselves.”

“His life’s work was to kill and maim our U.S. service members,” Mast told the “Friends” hosts. Soleimani “ended up in a number of pieces on the side of a road next to the Baghdad airport. And, that’s exactly the way it should have ended for him.”

No one is more qualified to say that: 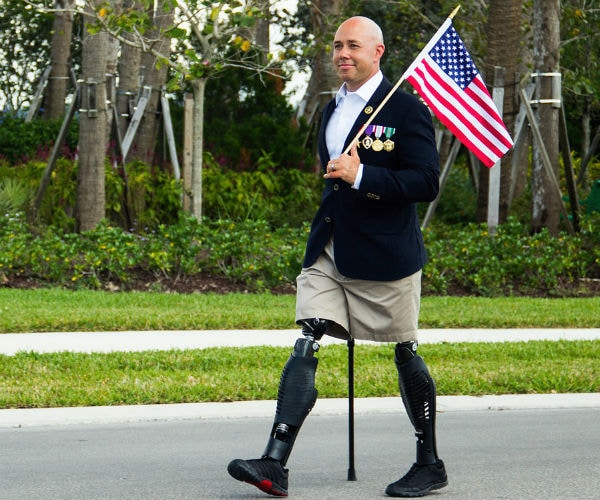 It’s a terrible thing to have an American political party siding with an enemy of the country. democrats defend Soleimani and would have grieved for Stalin and Hitler had they been taken out by Trump.