How do Iranian-Americans feel about Suleimani’s Death?

Amidst anti-war protests over the weekend, I came across this amusing survey yesterday from the LA Times and it’s “audience engagement director”, Samantha Melbourneweaver:

Iranian Americans, what do you think about the killing of Iranian Gen. Qassem Suleimani?

Los Angeles has one of the largest populations of Iranians outside of Iran, so we want to know how those with ties to the region are handling the news. If you’re Iranian American or have family in Iran or Iraq, tell us what you’re feeling and what questions you have about the killing of Suleimani. To be clear, we care about the opinions of all our readers, but for this article, we are focusing on the members of the Iranian diaspora, given how directly affected they are by the geopolitical crisis.

We don’t know (yet) what kind of survey response the LA Times received (assuming the respondents were also honest in their answers, including their requested backgrounds as Iranian-Americans); but the comments section on their Facebook posting is comical, as I don’t think many of the comments were the ones they were probably fishing for.  Examples:
Suha Fayadh Voelker It’s awesome. Thank you, Mr. President, for saving more american lives. 👏🏻
Jeff Siena Most Iranians are ecstatic!!
Thanking trump on social media. The students and the thousands of family of his victims 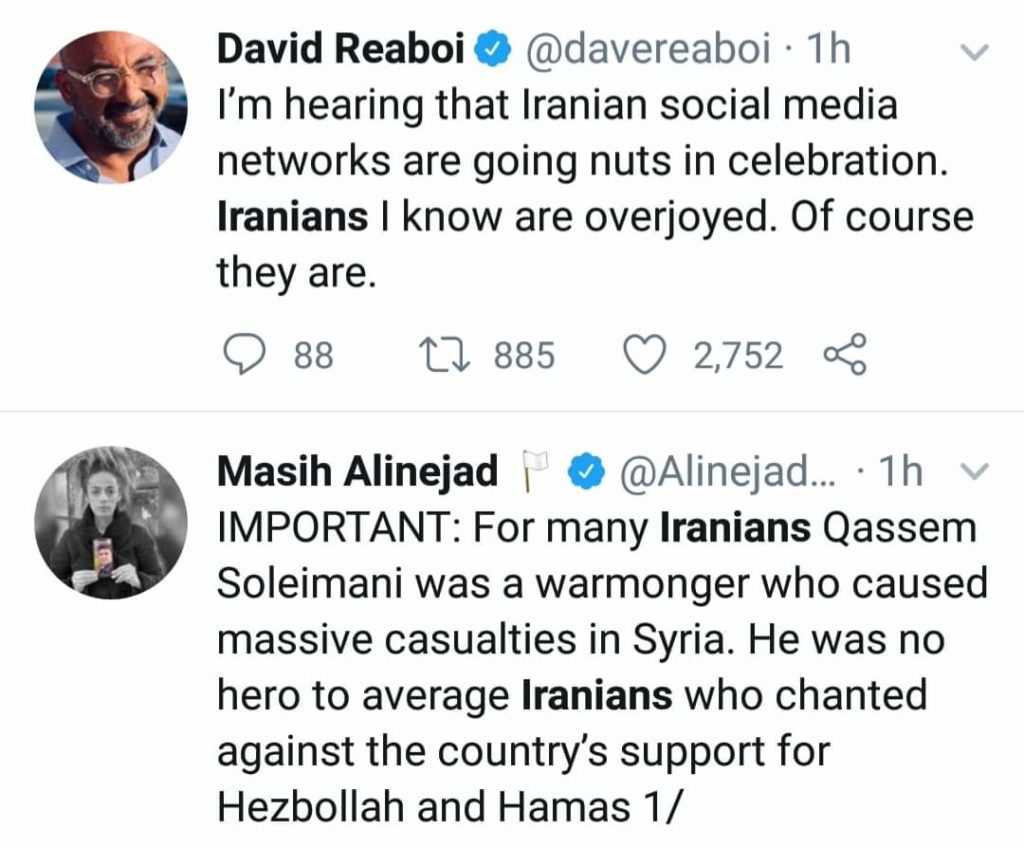 Leeda Marroquin I follow some kind of Kurdish leader or general on my Facebook it cool to see him eat dinner with other soldiers. I love what he put, if you see a rabbit running and a wolf in pursuit of it and a hunter shoots the wolf before he can eat the rabbit. Don’t you celebrate that the hunter took out the wolf? It’s hard to understand his writing but thats what there saying over there celebrating the hunter …. USA
Maite Plimmer I was sitting next to 2 Iranian gentlemen ( both lawyers) on a plane to Vancouver last year and the male air host was also from Iran but not living there for fear ( as he said he was gay and would be hanged) the other 2 lived in Tehran and said they were very hopeful with President Trump as they hated Obama being friendly with their government. They wanted things to change and the current tyranny stopped. They are probably positive about current affairs….
Rochsana Tahvildar Khazaneh Why would Iranians ask the LA Times questions? Average Iranians know far more about current events and history than LA Times reporters and editors. Very condescending post.
Arian Dehgan This incident definitely is going to be helpful for the freedom fighters in Iran because he’s the same person and his henchmen who got over 1500 youth of the country killed who aimed to overthrow this regime and he would do it again if he was alive but not anymore ! People are celebrating in Iran the death of this suppressing cockroach(especially families who lost their loved ones because of him) Hope they feel better. As well as all the Syrian civilians and other countries also .

Mel Mcbroome I’m reading most of these comments. Most of the Iranian people commenting are glad he is dead because the General killed his own people. I pray for the people of Iran and God bless them and our President for helping them.

Frank Ramirez What a joke the L.A times is..people have fled the Islamic regime for a better life!did you report the massive protests they had in Iran a few weeks back?many people were killed!

Mark Roulley And as a follow up question “What did you think about him killing over 600 Americans?”

Skandar Mbazaa I told the news for an iranian friend. She was so happy!

Mā Marvín Most overseas Iranians segregate themselves into groups. Majority of them call themselves Persians overseas. As they don’t agree with the theocracy back home. To them the last legitimate government was when Iran was a Kingdom. Especially the ones living in the U.S. Most are anti-regime to Iran today. Pro- which ever country they live in. Los Angeles has a very large Persian community. They protest against Iran almost every year with American flags and old Persian flags.

David Absalan As an Iranian American, at least 95% of Iranian people are happy for his death. That evil just recently ordered the killing of 1500 innocent protesters in Iran. He was the master mind of terrorist organization Sepah.

Stephen Paulsen Seriously? Youre asking Americans how they feel about a terrorist being killed? Good grief L.A. Times. You’ve lost your mind.

Carl Armant What kind of question is that? The SOB was a threat to humanity, a dangerous killer, no better than a serial killer. Iranian Americans feel like Americans and like any other nationality that loves peace and the rule of law.

Clarence Boddicker The LAT is trying to troll people. What they really want to really hear is that the Persian community is outraged that hes dead, just so they can have another talking point.

Tiki Bee It appears the LA Times (and I like the LA Times overall) not getting the response they were expecting.

And moving away from the leftcoast, that other bastion of progressivism on the other side of the continent, from the NYTimes:

Monday: While many said they didn’t mourn the Iranian

As my colleague Jose Del Real reported, Southern California is home to the largest Iranian community outside of Iran. And in the heart of the enclave known as Tehrangeles, near U.C.L.A., feelings were mixed.

“The last thing the world needs is yet another disastrous American military adventure in the Middle East,” said Jamal Abdi, the organization’s president. The killing of the commander, Maj. Gen. Qassim Suleimani, was “a profoundly reckless move,” Mr. Abdi said.

But many Californians who emigrated from Iran said they weren’t mourning Mr. Suleimani.

“A world without Suleimani is a better world for everyone,” Roozbeh Farahanipour, 48, told Jose. “Personally, I’m happy he got assassinated.”

[Read the full story about reactions in Tehrangeles here.]

Mr. Farahanipour grew up in a chaotic Tehran and was tortured under interrogation for his anti-government activism in his 20s. He eventually settled in the U.S., where he was given political asylum.

And on Sunday, The San Francisco Chronicle reported that a couple dozen Iranian-Americans rallied in the city’s Union Square to celebrate the death of a man they said was responsible for violence and decades of oppression.

Others said they were wary of war and frustrated with American intervention in the Middle East.

Dozens of Iranians and Iranian-Americans were held for hours at the border waiting to cross into Washington State from Canada, raising concerns about illegal detentions.

The situation has reshuffled already fraught political dynamics around impeachment. My colleagues reported that Speaker Nancy Pelosi hasn’t made up her mind on how to proceed.

For Kamran, and many other Iranian expats in the United States, watching the turmoil in Iran is bringing back memories of the Iranian Revolution of 1978-1979, when Shah Mohammad Reza Pahlavi was overthrown and Ayatollah Ruhollah Khomeini proclaimed Iran an Islamic Republic.

Kamran, now 52, was just 13 when she, along with thousands of other Iranians, fled the country to settle in the United States. Now she looks from across the world as unrest grips Iran once again.
According to state media, at least 21 people have died in the recent Iran protests, which were sparked by concerns about rising living costs and a stagnant economy but have developed into a broader outcry against the regime. The protests have become a significant challenge to the Iranian government’s authority.

Others, especially in the Iranian-American community in Los Angeles — nicknamed “Tehrangeles” — have felt much the same as they watch, from afar, another generation battle the Iranian regime.
“Seeing the images bring back memories of those days that are still vivid in my mind … but this time, it is different,” said Bita Milanian, an Iranian-American community organizer. “People are more aware, have access to ‘real’ information and can’t be brainwashed with false promises, as they were last time when they were promised everything that wasn’t provided to them.”
Milanian, who works in marketing, was 6 when the revolution happened. She lived in Tehran for eight years before becoming a refugee in Germany and later immigrating to the US.
Many agree that these recent protests also differ from those in Iran known as the “Green Movement” in 2009, which broke out in response to a disputed election win by then-President Mahmoud Ahmadinejad.