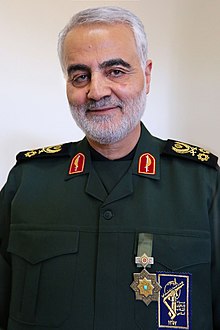 I was readying a piece about Qasem Soleimani when I got the news:

Soleimani is the military mastermind whom Secretary of State Mike Pompeo had deemed equally as dangerous as Islamic State leader Abu Bakr al-Baghdadi. In October, Baghdadi killed himself during a U.S. raid on a compound in northwest Syria, seven months after the so-called ISIS “caliphate” crumbled as the terrorist group lost its final swath of Syrian territory in March.

Justice has been served. Iran is outraged:

I couldn’t give a damn.

The UN is outraged

In a lengthy Twitter thread, Agnès Callamard said that “outside the context of active hostilities, the use of drones or other means for targeted killing is almost never likely to be legal,” adding that the U.S. would need to prove the person targeted constituted an imminent threat to others.

She also took issue with the justification for using drones in another country on the basis of self-defense.

I couldn’t give a damn. barack obama killed four Americans – including a 16 year old- and the world shrugged it off. He too is probably outraged, as he loses someone he admired.

I couldn’t give a damn.

democrats are outraged that this evil monster is dead:

Several Democrats vying for the White House in 2020 condemned Iranian Gen. Qassem Soleimani before taking aim at President Trump for ordering the deadly airstrike that will escalate tensions in the region and was done so without Congress’ approval.

Former Vice President Joe Biden claimed that by ordering the airstrike Trump “just tossed a stick of dynamite into a tinderbox.”

In a lengthy statement, Biden said Trump “owes the American people an explanation of the strategy and plan to keep our troops and embassy personnel, our people and our interests, both here at home and abroad, and our partners throughout the region and beyond.

There’s a reason I have looking forward to this day for a long, long time. This action is on a level with the elimination of Osama Bin Laden. Soleimani was responsible for the deaths and maiming of thousands of Americans:

The Pentagon confirmed Thursday evening that Trump had ordered the attack that killed Soleimani and other military officials at Baghdad International Airport in Iraq. Iran’s top “shadow commander” was responsible for the deaths of hundreds of American and coalition service members and the wounding of thousands more, the State Department said.

I cannot begin to express how pleased I am at this and here’s why.

Soleimani supplied IED’s to Iraq and Afghanistan which resulted thousands of dead and wounded American soldiers.

That Soleimani—who runs Iran’s elite paramilitary and covert operations group, the Quds Force—was even on the list appeared to catch some U.S. officials by surprise. A senior administration official briefing reporters on Tuesday morning didn’t have a ready response when asked when and why Soleimani was added. Secretary of State John Kerry reportedly denied that the 58-year-old general was on the list to be freed from the sanctions yoke. Iranian Foreign Minister Javad Zarif, agreed, saying Soleimani—whom the U.S. accused in 2011 of plotting to launch a terrorist attack in the United States—had been confused with someone else with a similar name.

They were all wrong—or maybe didn’t want to be right. Soleimani is, in fact, on the list, a Treasury Department official later confirmed to The Daily Beast. And his presence definitely surprised some powerful lawmakers, who are already sharpening their knives for a filleting of the Iran deal.

Obama likely financed the attack on the US Embassy in Iraq.

Pompeo got it right

“We didn’t send pallets of cash to the Iranians. We didn’t pay for hostages. We didn’t create a deal which would have given them a clear pathway to a nuclear weapon. We have taken a very different approach. We believe it’s the one that will ultimately lead to success and stability in the Middle East,”

Iran is, of course, shaking its fist at the US.

We should not give a damn. Iran is learning that the US will no longer bend over and take it up the wazoo as it did under obama.