Signs Barr and Durham are getting close to Obama 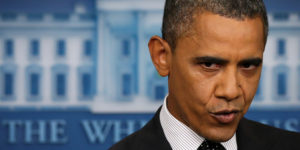 This was entire predictable and expected. The long knives have come out for AG Bill Barr and US Attorney John Durham, in the form of veiled threats from Eric Holder and the NY Times (and of course every nitwit democrat in Congress).

It seems that the President, i.e. this President, is not entitled to equal justice under the law.

Earlier this month Eric Holder, having no access to the facts, wrote an editorial ripping into Barr:

Holder, who served as attorney general under President Barack Obama, wrote an op-ed in the Washington Post where he said he was “reluctant to publicly criticize” President Trump’s attorney general but felt the need to speak out after Barr issued public statements about disagreements he had with Inspector General Michael Horowitz’s report on alleged FISA abuse. He also criticized Barr’s remarks from a Federalist Society event where he said the founders intended for one man to lead the executive branch, the president.

“Attorney General William P. Barr has made a series of public statements and taken actions that are so plainly ideological, so nakedly partisan and so deeply inappropriate for America’s chief law enforcement official that they demand a response from someone who held the same office,” Holder wrote.

Holder condemned Barr for criticizing the FBI and the rest of the intelligence community for their handling of the investigation into Trump’s campaign, writing, “And as someone who spent six years in the office Barr now occupies, it was infuriating to watch him publicly undermine an independent inspector general report — based on an exhaustive review of the FBI’s conduct — using partisan talking points bearing no resemblance to the facts his own department has uncovered.”

He also issued a threat of sorts to U.S. Attorney John Durham, who is investigating the origins of the FBI’s investigation into the Trump campaign and its ties to Russia. Durham spoke out after Horowitz dropped his report to say he disagrees with some of the findings, echoing Barr. Holder wrote, “Good reputations are hard-won in the legal profession, but they are fragile; anyone in Durham’s shoes would do well to remember that, in dealing with this administration, many reputations have been irrevocably lost.”

There it is- if Durham finds anyone other than Trump guilty of something his reputation is gone, “irregardless” of the facts.

Then comes the knee slapper:

“The American people deserve an attorney general who serves their interests, leads the Justice Department with integrity and can be entrusted to pursue the facts and the law, even — and especially — when they are politically inconvenient and inconsistent with the personal interests of the president who appointed him,” Holder wrote.

Holder must have written this fast and furious.

Durham dared dispute the summary of the IG report:

“I have the utmost respect for the mission of the Office of Inspector General and the comprehensive work that went into the report prepared by Mr. Horowitz and his staff.  However, our investigation is not limited to developing information from within component parts of the Justice Department.  Our investigation has included developing information from other persons and entities, both in the U.S. and outside of the U.S.  Based on the evidence collected to date, and while our investigation is ongoing, last month we advised the Inspector General that we do not agree with some of the report’s conclusions as to predication and how the FBI case was opened.”

The NY Times was there to shame Durham for it:

Others have been less willing to give Mr. Durham the benefit of the doubt, and it is clear he has placed his reputation for impartiality on the line by accepting this latest assignment.

And here’s why Durham is not qualified for the job:

Wearing gunmetal-frame glasses and a drooping goatee, he rises early and dresses in the dark, often mismatching his suit jackets and pants.

Holder’s tantrum is a signal that Barr and Durham are probably getting close to Obama. After all, he was (and is) Obama’s wing man. It was Obama who allowed 17 intel agencies to spread data among themselves in an effort to smear Trump.

With only days until Donald Trump takes office, the Obama administration on Thursday announced new rules that will let the NSA share vast amounts of private data gathered without warrant, court orders or congressional authorization with 16 other agencies, including the FBI, the Drug Enforcement Agency, and the Department of Homeland Security.

It was Obama who allowed outside contractors to access raw NSA data which was finally shut down by Admiral Mike Rogers because abuse was so rampant. How much of that raw data was used against Donald Trump and his campaign remains to be seen.

Page replied: “Yeah, whatever (re WH comment). We’ve got emails that say otherwise.”

They also wrote that Obama wanted to know everything:

Page wrote to Strzok on Sept. 2, 2016, about prepping Comey because “potus wants to know everything we’re doing.” According to a newly released Senate report, this text raises questions about Obama’s personal involvement in the Clinton email investigation.

As the investigation digs deeper we can expect the cacophony smearing Barr and Durham to grow louder, but rather than be angered by it we can be comforted by it. It’s a lot to hope for but if Barr and Durham take down Brennan and Comey (and Clapper) it will be a pleasure.

NO ONE runs a counter intelligence investigation on a candidate for the Presidency of the Untied States without the knowledge of the President and the Attorney General.

If they implicate Obama next year’s Christmas will be fabulous.

Having suspicions and actually delivering proof, kill the messengers.

You have to be supremely naïve, partisan or simply stupid not to see the fact that there is NO WAY this was carried out with top-level coverage and the assumption that the full fix was in and Hillary was the pre-determined winner.

But… just in case, a little insurance…

holder is the personification of human feces. the gay radicalized muslin ex pres. is sooo dirty. both he and holder via guns to the mexican cartel demonstrate their disgust of the American people. so where is fat ass lynch these days??

All they have to do is look. Unlike searching in vain for the existence of a crime, examining the commission of a crime is much easier and more productive.