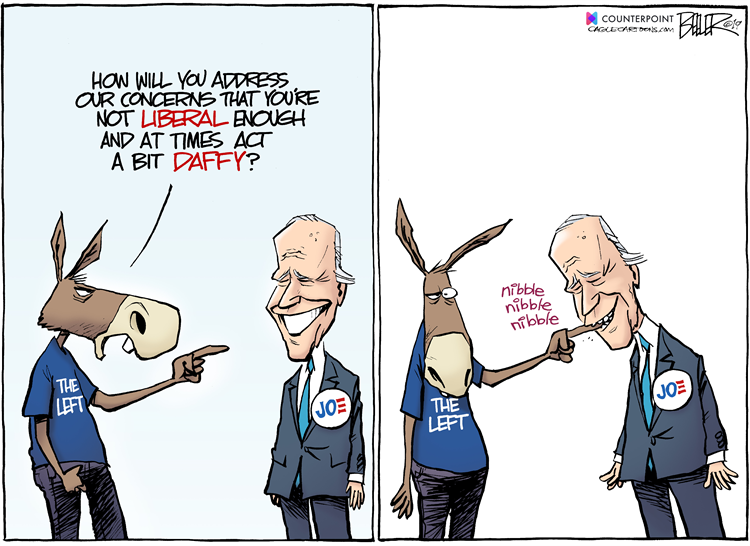 Another happy story! I know that I’ve posted a similar story a while back, but seeing religious zealots getting sprayed with poop by the horrible people who have the audacity to raise their food just warms my heart!

There’s something pathetic about how the Radical Left’s hatred for the president has to spill over to his family. But as the kids say, “Haters gonna hate”.

This week’s edition of “I really miss the days when the question ‘Is the Pope Catholic?’ was actually funny.”

12/9 – Transgender Demands Are An Attack On Real Human Rights

As a rape survivor, I can tell you firsthand that there are many parallels between the ways transactivists behave and the way sexual abusers act: They’re gaslighting. They’re grooming children. They’re making people feel guilty for having boundaries. They’re threatening to kill themselves if you don’t give them what they want. The price tag is your dignity.

Transmania has become a cult religion, complete with chants (e.g. “Trans women are women), shunning, punishing dissent, and silencing the opposition. If you have to shout people down, it’s probably because you’re afraid what they have to say makes too much sense. The trans cult exercises mind control over the masses who are terrified into submissive silence.

How short has the news cycle become? The Babylon Bee was already mocking this stupidity on the same day that the story broke.

I know, Democrats failing to practice what they preach is hardly news, but keep this filed away for when various feminist hypocrites try dragging out the fake “War on Women” dreck again.

First we get President Trump’s order to fight anti-semitism being smeared as anti-semitic, now this. It’s actually painful to watch the mental gymnastics that The Radical left has to contort to twist facts to comply with their crazed beliefs.

Friendly advice to the Muslims is Europe: They may be Europeans, but they’re still Germans. Don’t p*** them off. Trust me on this one.

ICYMI – I dropped a quick post in response to an article in The Washington Compost – Barack Obama, Conservative? The post got me another 24 hour posting ban from Facebook, so if you haven’t already read it give a click and find out what got Zuck’s minions so angry!

From the archives, we go back two years to how The Washington Post Highlights Everything Wrong With Journalism. It’s a good thing that’s no longer the case!

Apparently you never heard the story of "The Little Boy Who Cried 'IMPEACHMENT!!!' for three straight years?
Damn, I'm old enough to remember when NR was a Conservative publication

I don’t hate anyone ..! Pelosi pic.twitter.com/2pkyBSRL1E

Twitter just suspended Mitch McConnell’s re-election campaign for posting a video showing the kind of hatred and threat he gets DAILY from people like those who run twitter.
Don’t know if it’s a permanent ban or a short one.
But, consider it a badge of honor when you get banned by twitter or facebook.

I guess this pretty much confirms the rumor she’s a lesbian.

I’ve seen that video before; he missed a great opportunity to paint those white tents with the same thing liberals shovel on us.

I’m glad I’m not compelled to take this guy seriously.

12/9 – Transgender Demands Are An Attack On Real Human Rights

It’s great to know that whenever we begin to run low on stupidity, we know where to go and get a resupply.

Stating boldly, “We are IDIOTS!!” It’s pretty bad when Babylon Bee headlines need to be explained as sarcasm because they are too similar to reality.

Well, the men had the additional duties of serving as his body guards to protect him from Corn Pop. Tony the Tiger was lurking about as well.

Wouldn’t REAL white supremacists object to blacks killing people in their name? What the hell is going on?

Germany may have forgotten how to be ruthless and fascist. Maybe Schiff, Pelosi and Schumer should go to Germany to give them some pointers.

Time magazine has made a HS dropout slacker person of the year. A little girl who gets applauded when she disrespects her elders and betters. You better not disrespect her dont you dare. What kind of life will we have if spoiled poorly educated highly enabled children rule?A very PC world where Twitter can wish you into the cornfield?

A christmas tune from Nancy to the committee

@kitt: What kind of life will we have if spoiled poorly educated highly enabled children rule?

We’ve had a glimpse of this when we see Hollywood weirdos being two-faced about climate.
Take Mark Ruffalo. (Please!)
Playing a character with two different personas has taught him how to lead the double-standard life of a typical Hollywood environmental hypocrite;
one day, he’s flying to award ceremonies and making energy-guzzling action movies,
the next day he’s raging against the very industries and technologies that make his comfortable lifestyle possible.
Mark has no intention of quitting his limo/private jet lifestyle until WE ALL DO!
In other words, never.

Greta has no solutions, instead falsely claiming all the solutions to going carbon-free for over 6 billion people have already been developed.
She reminds me of Obama’s Energy Dept’s phony CAFE “policies” that were supposed to be followed even tho they were economically infeasible.
Sure, they existed – on paper.
But there was no way to upscale them to the real world, much less the entire world EVER.

I stepped away from the boob tube as this guy was ramblin’ about a sore toe in shoe too small, and missed this gem, I think they clipped out the part where leverage will tip over Ukraine, you know capsize it.
https://twitter.com/bennyjohnson/status/1205246033925672966/video/1

@Nan G: I’m a bit worried – it’s been almost 12 hours and this post hasn’t earned me a suspension from FB yet. I’ll have to find something more offensive to excerpt in next week’s post

@Spurwing Plover: The current Pope is dangerous – he seems intent on putting other religions ahead of Catholicism, such as Islam, Climastrology, etc.

I guess this pretty much confirms the rumor she’s a lesbian.

I doubt Hillary would ever repeat that in front of Huma

@kitt: Great Christmas tune – we were just listening to that in the car the other day on a Christmas mix CD I made some years back

@Nan G: #5 – that would explain why Ruffalo does such a good job of portraying The Hulk

@kitt: #6 – the title of “Dumbest Congress Critter” is no small feat

@Brother Bob: A little tune that is non partisan

slut hillary would fight with whore dog billy on who was going to get first dibs at the women the dog brought to the wipe house. she is gay as hell, that is why the radicalized muslin terrorist obama were good buddies.

@Brother Bob: Here’s a head start on next week. Do we need to remind these crybabies that Obama once allowed himself to be interviewed by a woman who immersed herself in a bathtub full of milk and cereal?

Barack Obama, Communazi? Based on Spygate and the rest of his American hating record, the answer seems obvious.

Do we need to remind these crybabies that Obama once allowed himself to be interviewed by a woman who immersed herself in a bathtub full of milk and cereal?

Thank you for bringing back that image that just force me to pour bleach over my eyeballs. Again!