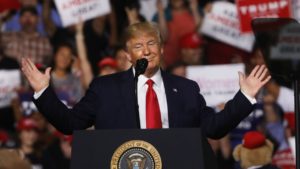 Adam Schiff gave an interview to The New Yorker in which he had some really nasty things to say about Donald Trump.  One stands out in particular:

Turning our attention to the American economy, you’ve heard about the low unemployment rate. What you may not have heard is that the workforce participation rate for those between 25 and 54 years old is up to 80.1 percent — the highest since early 2007.

If that’s eleven, then twelve would be the U.S. Census Bureau’s latest report on income and poverty, which came out in October. That report found real median family income up 1.2 percent from 2017 to 2018, real median earnings up 3.4 percent, the number of full-time, year-round workers increased by 2.3 million, and the poverty rate declined from 12.3 percent to 11.8 percent, with 1.4 million people leaving poverty.

Then there’s the new jobs report:

WASHINGTON (AP) — Hiring in the United States jumped last month to its highest level since January as U.S. employers shrugged off trade conflicts and a global slowdown and added 266,000 jobs.

The unemployment rate dipped to 3.5% from 3.6% in October, matching a half-century low, the Labor Department reported Friday. And wages rose a solid 3.1% in November compared with a year earlier.

November’s healthy job gain runs against a widespread view that many employers are either delaying hiring until a breakthrough in the U.S.-China trade war is reached or are struggling to find workers with unemployment so low. The pace of hiring points to the resilience of the job market and economy more than a decade into the U.S. economic expansion — the longest on record.

And if you want more, there are lengthy collections of Trump accomplishments to be seen here and here.

Black and Hispanic unemployment are at record lows, employment of women is up.

We’re in a relative peace. The US isn’t knocking over another Libya for no reason.

He’d get a lot more done but for this impeachment nonsense.

And that’s why it’s happening.

It’s not to save the country from Trump. It’s to save democrats from Trump.

“I do hate what he is doing” says Schiff.

Without a doubt. The country is doing very well. democrats have lost hope for a recession. They want impeachment because they believe they will lose in the Courts.

They want to impeach Trump because they know they cannot beat him in a fair election now. Dem Rep. Al Green:

Nancy Pelosi believes the next election is too important to be left to the people of the US.

They need to remove him before he can do more good for the country. It’s imperative.

Good luck with that platform. Impeaching Trump will allow focus on all the above to be emphasized. It will guarantee his reelection and it may well cost them the House.