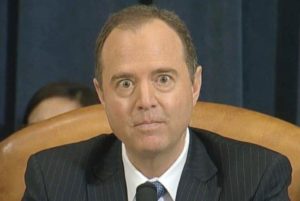 Yesterday’s hearings were a pathetic spectacle. democrats presented three pompous democrat donor asses from the University of Pompous Ass Law Schools. Each was hyperbolic and/or dishonest.

Noah Feldman was bombastic- and dishonest

Noah Feldman testified Under Oath that he was an “Impeachment skeptic” until the July 25 call.

In a Vice Article on 5/17/17 he stated that President Trump committed Impeachable Acts. (https://t.co/6TowiKTDMS)

This is Perjury and should be brought for Criminal Referral. pic.twitter.com/woa1XrtQPG

This is a lie.

Here is the witness (did he swear in?) in May 2017 claiming Trump had committed impeachable offenses. @RepGosar @DonaldJTrumpJr https://t.co/ScDDSB8jO0 pic.twitter.com/tHlrNLA6pp

Feldman has a soft spot for Islamists.

Harvard Law professor and Democrat witness Noah Feldman took the witness stand yesterday in front of the House Judiciary Committee. Feldman wrote in a New York Times op-ed published on March 16, 2008 that “Islamic law offered the most liberal and humane legal principles available anywhere in the world.”
He also juxtaposed Sharia with English common law, and claimed the West “needs Shariah and Islam”.

Again, if you were inclined to believe the Democrats' witnesses are giving unbiased analysis…

Here is Pamela Karlan, law professor Democrats invited to urge impeachment, explaining how she once decided to cross the street rather than walk by Trump Hotel pic.twitter.com/xWVqhhPtQx

Michael Gerhart was way over the top

But however smart people such as Michael Gerhardt, distinguished professor of constitutional law at University of North Carolina, might be, they aren’t immune from peddling partisan absurdities. Once Gerhardt argued that Trump’s conduct was “worse than the misconduct of any prior president,” we no longer had any intellectual obligation to take him seriously on the topic.

Because while I’m certainly not a distinguished professor, I am very confident that history began before 2016. Which means that, even if I concede Gerhardt’s framing of Trump’s actions — bribery, extortion, etc. — I can rattle off at least a dozen instances of presidential misconduct that are both morally and constitutionally “worse” than Trump’s blundering attempt to launch a self-serving Ukrainian investigation into his rival’s shady son.
Let’s ignore for a moment that American presidents have owned their fellow human beings, and focus instead on the fact that in 1942, the president of the United States signed an executive order that allowed him to unilaterally intern around 120,000 Americans citizens of Japanese descent. Not only was the policy deliberately racist, it amounted to a full-bore attack on about half the Constitution that he had sworn to uphold. Such an attack was a specialty of FDR’s, despite the all the hagiographies written about his imperial presidency.

This is about as dirty and despicable as it gets but it does open the door for the Senate GOP. They can feel free to subpoena and publish the phone records of the entire Schiff family, the entire Biden family, Nadler, Pelosi and all of Barack Obama’s lawyers.

FYI, a past President can be impeached if there was something like obstruction of an investigation into a gun running fiasco.

This impeachment farce is all about Trump allegedly abusing his power against a political opponent. Schiff has been lying about the phone call since the very first day of hearings and he does not stop. Schiff continues to utter things such as

‘The Uncontested Facts Show This President Solicited A Bribe’

That is patently false. Schiff’s behavior is completely out of control.

The Senate should conduct hearings on this abuse of power and ultimately expel Adam Schiff from Congress as he deserves.

Pelosi is now pushing to hold impeachment hearings next Monday. You know, the date the IG report is being released.