Trump is being threatened with impeachment for Joe Biden’s crimes 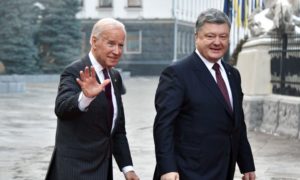 People need to understand that Trump is being threatened with impeachment for Joe Biden’s crimes.

It’s all a smokescreen to protect Biden’s viability.

If you remember the axiom taken from the Clinton playbook you’ll see that democrats accuse you of crimes they commit. There are a lot of accusations of a quid pro quo against Donald Trump flying around but there is concrete proof of Joe Biden demanding a quid pro quo from Ukraine and Biden himself is the provider:

It is well known that wherever Joe Biden went, Hunter Biden made a lot of money. The younger Biden was awarded positions and jobs for which he was completely unqualified and they frequently were a conflict of interest:

3. Hunter Biden sought to monetize off his father’s political standing on Wall Street.

4. Hunter Biden’s firm scored a $1.5 billion deal with the Bank of China only days after his father paid an official visit to the country.

5. The Obama-Biden administration helped facilitate the sale of U.S. company with insight into military technology to BHR and a Chinese state-owned defense firm.

And that’s before Ukraine.

Secretary of State John Kerry announced the U.S. support for Ukraine’s nationalist government in March 2014, a month after a mass uprising pushed pro-Russian President Viktor Yanukovych out of office and inspired a corresponding pro-Russian uprising in the east. Biden became the Obama administration’s “point person” for the country.

On April 16, 2014, Biden met with Devon Archer, a former star fundraiser for John Kerry’s 2004 presidential run and business partner in Rosemont Capital with Biden’s son Hunter. (Federal agents would later arrest Archer in May 2016 for defrauding a Native American tribe.)

Less than a week later (April 22) came an announcement that Archer had joined the board of Burisma, a secretive Ukrainian natural gas company. On May 13, Hunter Biden would also join the company’s board.

On the day before Archer’s hiring, April 21, the vice president landed in Kiev for high-level meetings with Ukrainian officials. He spearheaded the effort to invest $1 billion from the U.S. and the International Monetary Fund (IMF) into Ukraine.

Subsequently the elder Biden steered $1.8 billion in aid to Ukraine– which then disappeared. The presence of Hunter Biden on Burisma’s board seemed to quiet down interest in corruption and a highly questionable character was once again permitted access to the US.

For these and other reasons, the U.S. government placed Kolomoisky on its visa ban list, prohibiting him from entering the country legally. In 2015, however, after Hunter Biden and Devon Archer had joined Burisma’s board, Kolomoisky was given admittance back into the U.S.

The hiring of Hunter Biden was a shield for the corruption in Ukraine. And that leads us to the 2016 election. Ukraine was eager to keep an ally in the White House- Hillary Clinton- who would certainly continue the Biden tradition. So Ukraine happily cooperated with the DNC Alexandra Chalupa when she sought and got dirt on Paul Manafort which would then be handed over to Robert Mueller with the intent of harpooning the Trump campaign.

But Andrii Telizhenko, who worked as a political officer in the Ukrainian Embassy under Shulyar, said she instructed him to help Chalupa research connections between Trump, Manafort and Russia. “Oksana said that if I had any information, or knew other people who did, then I should contact Chalupa,” recalled Telizhenko, who is now a political consultant in Kiev. “They were coordinating an investigation with the Hillary team on Paul Manafort with Alexandra Chalupa,” he said, adding “Oksana was keeping it all quiet,” but “the embassy worked very closely with” Chalupa.

In fact, sources familiar with the effort say that Shulyar specifically called Telizhenko into a meeting with Chalupa to provide an update on an American media outlet’s ongoing investigation into Manafort.

Telizhenko recalled that Chalupa told him and Shulyar that, “If we can get enough information on Paul [Manafort] or Trump’s involvement with Russia, she can get a hearing in Congress by September.”

While it’s not uncommon for outside operatives to serve as intermediaries between governments and reporters, one of the more damaging Russia-related stories for the Trump campaign — and certainly for Manafort — can be traced more directly to the Ukrainian government.

Documents released by an independent Ukrainian government agency — and publicized by a parliamentarian — appeared to show $12.7 million in cash payments that were earmarked for Manafort by the Russia-aligned party of the deposed former president, Yanukovych.

The New York Times, in the August story revealing the ledgers’ existence, reported that the payments earmarked for Manafort were “a focus” of an investigation by Ukrainian anti-corruption officials, while CNN reported days later that the FBI was pursuing an overlapping inquiry.

hillary clinton grabbed hold of the story and she and the DNC then painted Trump as a Russian tool:

Clinton’s campaign seized on the story to advance Democrats’ argument that Trump’s campaign was closely linked to Russia. The ledger represented “more troubling connections between Donald Trump’s team and pro-Kremlin elements in Ukraine,” Robby Mook, Clinton’s campaign manager, said in a statement. He demanded that Trump “disclose campaign chair Paul Manafort’s and all other campaign employees’ and advisers’ ties to Russian or pro-Kremlin entities, including whether any of Trump’s employees or advisers are currently representing and or being paid by them.”

Meanwhile Hunter Biden was raking in millions for nothing

During his time on the board of one of Ukraine’s largest natural gas companies, Hunter Biden, the son of former U.S. Vice-President Joe Biden, was regarded as a helpful non-executive director with a powerful name, according to people familiar with Biden’s role at the company. …

Interviews with more than a dozen people, including executives and former prosecutors in Ukraine, paint a picture of a director who provided advice on legal issues, corporate finance and strategy during a five-year term on the board, which ended in April of this year.

Biden never visited Ukraine for company business during that time, according to three of the people.

So why was Hunter Biden hired?

“It was to protect (the company)”

As I have reported, the pressure began at least as early as January 2016, when the Obama White House unexpectedly invited Ukraine’s top prosecutors to Washington to discuss fighting corruption in the country.

The meeting, promised as training, turned out to be more of a pretext for the Obama administration to pressure Ukraine’s prosecutors to drop an investigation into the Burisma Holdings gas company that employed Hunter Biden and to look for new evidence in a then-dormant criminal case against eventual Trump campaign chairman Paul Manafort, a GOP lobbyist.

U.S. officials “kept talking about how important it was that all of our anti-corruption efforts be united,” said Andrii Telizhenko, the former political officer in the Ukrainian Embassy in Washington who organized and attended the meetings.

In 2018 a Ukranian court found that Ukraine had indeed interfered in the US elections.

Two Ukrainian officials interfered in the 2016 U.S. presidential election when they revealed details of illegal cash payments worth millions of dollars from the country’s former ruling party, the Party of Regions, to President Donald Trump’s former campaign manager Paul Manafort, a court in the country’s capital, Kiev, determined on Wednesday.

democrats vehemently deny that Biden wanted the prosecutor looking into Burisma fired to protect his son, but they sure don’t want the investigation re-opened. Badly

While choosing his words carefully, Murphy made clear — by his own account — that Ukraine currently enjoyed bipartisan support for its U.S. aid but that could be jeopardized if the new president acquiesced to requests by President Trump’s lawyer Rudy Giuliani to investigate past corruption allegations involving Americans, including former Vice President Joe Biden’s family.

Murphy boasted after the meeting that he told the new Ukrainian leader that U.S. aid was his country’s “most important asset” and it would be viewed as election meddling and “disastrous for long-term U.S.-Ukraine relations” to bend to the wishes of Trump and Giuliani.”I told Zelensky that he should not insert himself or his government into American politics. I cautioned him that complying with the demands of the President’s campaign representatives to investigate a political rival of the President would gravely damage the U.S.-Ukraine relationship. There are few things that Republicans and Democrats agree on in Washington these days, and support for Ukraine is one of them,” Murphy told me today, confirming what he told Ukraine’s leader.

The implied message did not require an interpreter for Zelensky to understand: Investigate the Ukraine dealings of Joe Biden and his son Hunter, and you jeopardize Democrats’ support for future U.S. aid to Kiev.

Sounds a lot like a quid pro quo to me.

There is obviously more here than has been disclosed. While democrats are screaming about a Trump-Zelensky phone call, they want to make damn sure no one looks into Biden. This is all a smoke screen to protect him.

Hunter Biden and his Ukrainian gas firm colleagues had multiple contacts with the Obama State Department during the 2016 election cycle, including one just a month before Vice President Joe Biden forced Ukraine to fire the prosecutor investigating his son’s company for corruption, newly released memos show.

During that February 2016 contact, a U.S. representative for Burisma Holdings sought a meeting with Undersecretary of State Catherine A. Novelli to discuss ending the corruption allegations against the Ukrainian firm where Hunter Biden worked as a board member, according to memos obtained under a Freedom of Information Act lawsuit. (I filed that suit this summer with the help of the public interest law firm the Southeastern Legal Foundation.)

Just three weeks before Burisma’s overture to State, Ukrainian authorities raided the home of the oligarch who owned the gas firm and employed Hunter Biden, a signal the long-running corruption probe was escalating in the middle of the U.S. presidential election.

Hunter Biden’s name, in fact, was specifically invoked by the Burisma representative as a reason the State Department should help, according to a series of email exchanges among U.S. officials trying to arrange the meeting. The subject line for the email exchanges read simply “Burisma.”

And Jeffrey Epstein didn’t kill himself