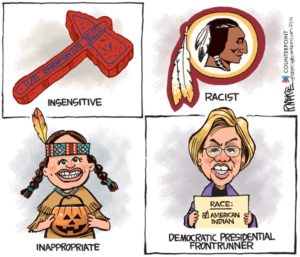 Welcome back everybody! Hopefully nothing you saw last night was as scary as this insanity:

At this point we can just count the days until Gulag Barbie gets primaried out and immediately gets a prime time slot on MSNBC.

What is it about bitter Democrats who lose presidential elections behaving like scumbags at funerals?

The Radical Left lying to advance their agenda? I am SHOCKED! Shocked, I say!

You’ve probably already seen this, but in case you missed Dr. John’s post this is a must read. Before reading his article I thought that The Washington Post had the dumbest take on a terrorist getting killed.

This may be the most perfect example I’ve seen yet of a phrase I see myself repeating all too often about today’s Left:

10/29 – ‘Your Past Is Terrible, and Your Future Is Terrible’: What the Left Tells Young Americans

This article by Dennis Prager Nails how The Radical Left is abusing our nation’s children. The last paragraph really brings it home:

Only when one understands that the left — the left, not liberalism — has always and everywhere been a destructive force can one begin to understand what is happening to America. And the left has damaged no group more than America’s youth. Leftists speak about “the children” — but they care about “the children” as much as the communists cared about “the workers.”

Am I the only one who wondered what these former media darlings have been up to since January 2009? Ah, nothing like some anti-Semitism to fill the void!

Because being a Leftist means never having to say that you’re sorry.

Spoiler: It’s from one of the Generals of the Vichy Conservatives, Jonah Goldberg

ICYMI – I pointed out that Well What do You Know – Hillary was Right!

And from the archives, we go back about a year and a half to where I offered some constructive advice for Democrats – Democrats, You Missed a Huge Opportunity in President Trump’s Russia Speech. C’mon, throw me a click – it’s not every day I can write a post that includes both Karate Kid III and WWE references!

Happy November – have a great weekend!

The year is 2192. The British Prime Minister visits Brussels to ask for an extension of the Brexit deadline. No one remembers where this tradition originated, but every year it attracts many tourists from all over the world.

It’s been like walking on eggshells for posters over at Lucianne.com lately.
Her son is Jonah Goldberg while her main claim to fame was in encouraging Linda Tripp to encourage Monica Lewinsky to by all means KEEP the blue dress.
It probably saved Monica’s life.
So, anyway, I posted Jonah’s original article there and it got over 50 replies very quickly.
Today this American Thinker reply to Jonah was posted at Lucianne.
I hope it wasn’t the last straw.
Lucianne isn’t getting any younger.

But on another point of radical Leftism this week:
Gavin Newsome knows that almost all CA’s public employees have stock in PG&E.
So, he doesn’t want that utility to be hurt too much by suing it out of existence.
What to do?
He made a direct plea to Warren Buffet, billionaire, to buy PG&E.
Then he’d be suing a horrible capitalist out of existence unless he sinks billions into it to clean up its wires and ancient infrastructure.
Of course, not a peep from him about how he and Gov Brown forced PG&E to spend untold millions on photogenic “green” junk instead of doing the unattractive work of keeping the lights on.

I guess the old saying of, “will the last Californian to leave, please turn out the lights,” is unnecessary now.

If this bag daddy shows up again, hes been reported dead like 6 times, next time we send in Buffy the vampire slayer.
What do you think “oops Ive done it again” by brittney
or “Time after time” by cyndi?
The dog, Conan, is going to the White House just so Trump can show voters how the left can also hate dogs.

@Nan G: Jonah used to be one of my favorite writers. Trump has really flushed out the phonies & hypocrites from our side.

@kitt: The Babylon Bee had a great storyless headline this week:

Trump Gets Dems To Interrupt Baseball, Condemn Dogs, Side With Terrorists All Within 24 Hourshttps://babylonbee.com/news/trump-gets-dems-to-interrupt-baseball-condemn-dogs-side-with-terrorists-all-within-24-hours

@Brother Bob: When the world becomes the onion, go to babylon for satire then wonder why it doesnt seem so far out. Mad magazine just couldnt keep ahead of reality.

@kitt: Has Trump ever had a dog?—doesn’t seem the type. He’d rather applaud his sons for their trophy killings in Africa.

@Richard Wheeler: Has Trump ever had a dog?—doesn’t seem the type.

You really ought to look up the video (if You Tube hasn’t pulled it) of the day Trump did many of the duties of several of his own hotel’s workers.
In one job he was tasked with walking a tiny dog until it did its business.
Definitely not the dog type…..but the dog never knew it, as he spoke in soft tones to it and commended it for being so good.
But he did love vacuuming!
He said, “There’s a piece of lint,” then he ran the machine over the lint and looked again and added, “And now its gone.”
Hilarious!

@kitt: Has Trump ever had a dog?—doesn’t seem the type.

Not the “pet” type but not an animal hater. Even trophy hunters, that provide much needed conservation dollars everywhere, are not animal haters.
Short sighted protectionists and ignorant green policies are why your state is blackened with fire millions of innocent forest creatures homeless or dead.
https://www.goodreads.com/book/show/29236598-secret-service-dogs

Wheeler gets all apoplectic at the thought of a shot and killed water buffalo but supports the party who thinks it is OK to rip a fully formed human being out its mother’s womb.

Oh, he’ll claim he doesn’t support abortion but that it’s a woman’s “choice.”

What a hypocrite he is.

The benefit to conservation by hunters and fishermen is huge.
Greenies would plant a huge field of ugly solar panels ruining their habitat.

@Richard Wheeler: #8: Not sure, but at the very least unlike Obama, Trump has never eaten a dog.

At the risk of sounding cliche, Jonah used to be real. Back in the day I emailed him a few times and he actually responded. Little did I know he was a Pierre Dilecto in whale’s clothing

Gosh… asking a simple question and getting no answer; what’s that like?

I wonder if Sandy has seen the fuel and environmentally efficient the people Democrats keep in poverty and illegal immigrants drive?

Actually, there is no way to honor a corrupt, biased, partisan Democrat at their funeral than making it a political partisans slam-fest. I only hope they checked the casket to make sure Elija ain’t taking the millions he and his wife siphoned out of Baltimore with him.

Well, they asked around and because of global warming now, those days weren’t supposed to have been so hot. So, they fixed it.

For Democrats, the enemy of their country is their friend.

It was an accomplishment that served justice, made the world safer and was a great accomplishment and victory for the Trump administration and the entire country… so it has to be bad.

10/29 – ‘Your Past Is Terrible, and Your Future Is Terrible’: What the Left Tells Young Americans

But, of course, socialism and putting your lives and future totally in the hands of the government will make it all better.

Well, they’ll look the other way on the anti-Semitism and abuse of women if they will hate America along with them.

Maybe they’re just gluten intolerant… as well as intolerant of everything else that isn’t insanely liberal.

Yeah, admitting to impropriety will protect him from being impeached like releasing a transcript of a benign call with another national leader will prove all the accusations of him are totally false and will shut Democrats the hell up. Uh huh.

Well, they’ll look the other way on the anti-Semitism and abuse of women if they will hate America along with them.

Leftists are starting to finally be honest that to them anti-semitism is not a bug, but a feature

@Brother Bob: Socialism and anti-Semitism are both based on envy, so it only stands to reason they should be permanently linked.

People don’t know many of the stories about Donald Trump’s compassion because the media is silent on them.
You betray extreme ignorance to make your silly claim that can so easily be debunked even without research, just memory.

When a man died of cancer, his family pointed out that President Trump, who knew this man from years before when they worked on something together, called him every single day to see what he could do and how the man was doing.
When DT was still a New York private citizen he stopped in traffic to thwart a mugging.
He has made taking better care of US Veterans a priority from early in his campaign. Remember all the horror stories under Obama about Veterans being ignored? Now they can go to any private doctor if the wait is too long. No more horror stories.
Under Obama and before, the FDA was taking longer and longer, costing more and more money for a drug to get approved for use in humans. Candidate Trump ran n a platform that included, “Right To Try,” with regard these drugs and patients who are dying.
Every penny (minus the one dollar required by law) President Trump has been paid has gone to charity.
If you’d watched even one Trump rally from when he ran, you’d see the real compassion he has for all of those who lost a loved one to the criminals/drunk drivers among the illegal alien group.

You betray extreme ignorance to make your silly claim that can so easily be debunked even without research, just memory.

People don’t know many of the stories about Donald Trump’s compassion because the media is silent on them.

Whenever he shows compassion, the liberal media attacks him, so it is not surprising those who only consume and believe liberal propaganda that Trump is not compassionate. Yet, whenever there is a tragedy, Trump shows compassion and liberals politically exploit it, so I would observe that not only is Trump more compassionate, but the left has NO compassion whatsoever. But, what’s facts to a liberal?