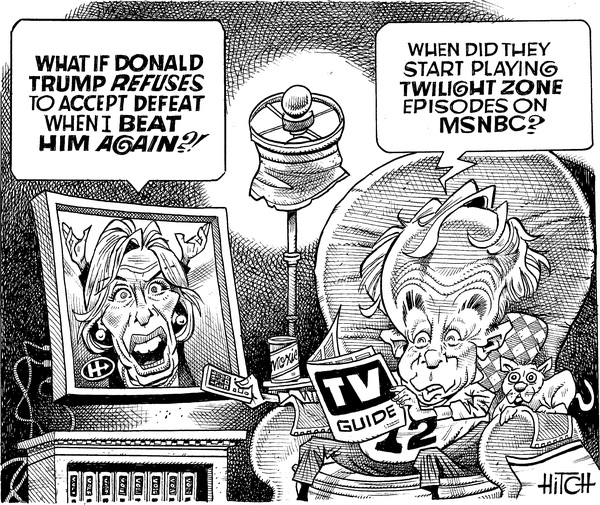 Welcome back, everybody! Busy week, so a relatively light post today. Another week closer to Halloween, and forget the haunted houses – if you want something truly scary take a look at the ideology that is trying to take over our country!

10/14 – Three Nations That Tried Socialism and Rejected It

Since Chinese Communism has been in the news so much lately, let’s lead off by taking a look at its slightly less ugly cousin, Socialism.

The only thing more disturbing than the thought of Hillary saying these things while drunk is the notion that she was probably completely sober when did.

And by “Surprise”, William Teach means “not in the slightest bit surprising”. And never ones to give  a damn about their own hypocrisy, The Nation whines, Enough with the air shaming, already!

10/20 – Why Not, Can The Reputation Of The United Nations Get Any Lower?

Expanding on the link from 10/18, expect these stories to become a lot more common. And on a larger scale.

Labor unions had their purpose back in the day, and in specific criteria, still do. But like any organization, they have the same fundamental flaws as any other.

10/23 – Daryl Morey was right”: Shaq speaks out on NBA-China controversy

Nice to see that someone in the NBA still has a spine.

A little bit condescending, a little bit overly optimistic for the good guys, but still a good read from start to finish

Yes, you already knew that. But this link lays out the disturbing path where Big Media is going

ICYMI – I pointed out that The Washington Post Isn’t Even Trying to Hide its Racism Anymore.

From the archives, as we’re a year past The Radical Left’s first smears against Justice Kavanaugh, I offered 10 Questions Judge Kavanaugh Should Answer.

Quick language warning – the second tweet has some cussing. You’ll want to click on this and be ready to share with any friends who think that Tulsi Gabbard is some kind of “Moderate”.

The new #WokeAF Batwoman's ratings are abysmal and this review blames it on 'trolls'– just like a Soviet Commissar blaming 'wreckers' for the failure of Stalin's glorious 5-year plan:https://t.co/3Bdimu0bJg

What the flying fuck is up with all of you Tulsi worshippers? Seriously, what the fuck? You see a Democrat who hasn't gone full Mussolini and you think she just walks on water? Do a bit of fucking research on her before you… you know what, no, fuck this. It's time. THREAD TIME.

The most disturbing thing about this is how unshocked I am by it. I have overheard Hollywood leftists on set openly wish for the deaths of Republicans for 20 years. This is totally normal, acceptable and typical behavior for the Left.#ExposeCNN https://t.co/m37DBiiqGk

10/14 – Three Nations That Tried Socialism and Rejected It

But wouldn’t someone so smart as Bernie or Wahoo Warren do it right?

Better than drunk-Presidenting. Democrats complain about Trump wrecking civility (which is actually them being uncivil simply because Trump won) while Hillary puts her vindictive hatred on display trying to destroy a Democrat candidate because she endorsed socialist Bernie. Hillary, who authorized selling uranium to the Russians seems jealous if Putin cheats on her with any other Democrat.

On private jets they don’t have to have their alternative reality spoiled by seeing people who don’t share their socialist dreams.

10/20 – Why Not, Can The Reputation Of The United Nations Get Any Lower?

The UN is useless. Why they aren’t in the middle of the Syrian debacle handing out sanctions and condemnations to the parties involved is indicative of just how useless and corrupt they are.

I guess the employee would have gotten in trouble had he punched that bullhorn while the idiot had it up to his mouth. I doubt I could have resisted.

Labor unions look out for labor unions, not the workers.

10/23 – Daryl Morey was right”: Shaq speaks out on NBA-China controversy

The NBA, who protested men not being able to invade women’s restrooms and Trump criticizing hypocritical and anti-American NFL protests, doesn’t have much to say when speaking out might cost them a buck (or yen). I thought liberals didn’t approve of exploiting people for profits. Gutless, unprincipled cowards.

Based on Trump’s performance and accomplishments and what his opposition wish to do to this nation, he should be the overwhelming victor. Once again, the media holds the key.

Government would be far more honest and efficient if the media was not so corrupt. As it is, they will only report a scandal if it is non-Democrat and, if one isn’t available, they will gladly make one up. After all the hype by media and Democrats (redundancy) of Russian collusion by Trump, when every accusation turned up to be false and fabricated, there is but one conclusion to draw; it was a concerted and manipulated effort. Yet the media allows Democrats to charge Trump with doing exactly what they themselves (with the aid and abetting of the media) have been doing and get away with it. THAT is the problem that is destroying America.

Yeah, seeing Gabbard get skewered by Hillary (with the media’s aid) for choosing the wrong corrupt socialist in 2016 doesn’t generate much sympathy or support for her from me. It is, however, entertaining to watch them devour each other.

Dont be telling the truth when it comes to the face, the symbol, the icon of climate change.
The Coke bears have been “getting busy”, how dare they not go extinct!
https://www.youtube.com/watch?v=zoKVwNlgu2Y&list=RDzoKVwNlgu2Y&start_radio=1&t=2
https://www.thenewamerican.com/tech/environment/…

As if Hillary didnt already “have a special place in hell”…..Madeleine? Madeleine? Has anyone seen Madeleine.
No one is worshipping Natasha Gabbard.

BB “some cussing” you say?—says there are 8 Repub. Senators could vote DT guilt

Would those be the ” scum ” DT refers to?

Nats no surprise after beating Dodgers and SWEEPING Cards.

Yeah, seeing Gabbard get skewered by Hillary (with the media’s aid) for choosing the wrong corrupt socialist in 2016 doesn’t generate much sympathy or support for her from me. It is, however, entertaining to watch them devour each other.

@kitt: I had posted a link to Greta death metal a few weeks ago, but I like the new vid better!

And Gabbard’s getting some weird love from the more Libertarian side of the Conservasphere – Stossel, Rubin, Crowder, etc. Not worshipping, but being the least insane inmate in the asylum has gotten Tulsi some velvet glove treatment

@Brother Bob: Yes Bob, we just hate seeing kittens stomped and bags of puppies chucked into the river.
This is no way to treat a classic winnie https://www.usatoday.com/story/news/nation/2019/10/25/north-las-vegas-casino-motorhome-crash/2460449001/

Would those be the ” scum ” DT refers to?

I prefer the term “Vichy Conservatives”, but I think that’s an applicable term for collaborators with the lying scum who have spent the last three years obsessed with overturning a free election. Tough, but fair. What sane American wouldn’t condemn this?

@Brother Bob: Like with Jim Webb, there simply has to be something wrong with a person to willingly be a part of the Democrat party of today. Supporting Bernie is something that would definitely have to be purged from your past in order to be considered a moderate.

I prefer the term “Vichy Conservatives”, but I think that’s an applicable term for collaborators with the lying scum who have spent the last three years obsessed with overturning a free election.

Again, you don’t have to like every aspect of Trump’s personality to be disgusted with what Democrats are doing to the Constitution and the assumption this country is based on the rule of law, justice and truth.

Again, you don’t have to like every aspect of Trump’s personality to be disgusted with what Democrats are doing to the Constitution and the assumption this country is based on the rule of law, justice and truth.

The same people who ask how we can support someone as boorish as President Trump are the same ones who twiddle their thumbs or look away and whistle to themselves as Leftist leaders compare us to mass murderers when they’re not physically harassing or assaulting people who have the audacity to not their their zealotry.

@Brother Bob: And they want us to believe that the reason they have become such thugs is because Trump made them. His mere existence (well, his existence since 2015) has made them become fascist thugs. It’s Trump’s fault.

The same people who ask how we can support someone as boorish as President Trump are the same ones who twiddle their thumbs or look away and whistle to themselves as Leftist leaders compare us to mass murderers when they’re not physically harassing or assaulting people who have the audacity to not their their zealotry.

Brother Bob, let’s not forget the left’s ongoing, and often successful, attempt to totally change our society into the utopia of perfection they think can be achieved. College students now think the First Amendment is ripe for change and that free speech should not really be “free” if you don’t agree with them, hence the shouting down of speakers at universities that the snow flakes (students) don’t like because they disagree with the speaker’s opinions. G-d forbid some student might be “triggered.” Or maybe you object to being forced to cater to the LBGQXYZ crowd, rejecting the idea that there are more than two genders (male and female, as proven by the science of DNA) being hounded and persecuted until your life is totally destroyed. You know, like parents who want to opt out their young students from their kindergarten sex-ed class or Drag Queen Story hour because the Communists who run the schools think they know what is better for those children than the parents do.

The Democrat led Congress recently passed another animal cruelty act, making animal cruelty a federal felony. And while I would prefer a bill called “Experiencing The Pain You Subjected That Dumb Animal To” act, the Pelosi led Congress has refused 80 times to bring to the table the “Born Alive” bill that would prevent the killing of a child born of a botched abortion. Unfortunately, most of those babies are ripped apart in the womb before removal, but hey “reproductive health” and all of that bullshit.

In the 1800’s, if a man was a wife beater, a group of masked men would visit him in the dark of night, pull him from his bed and give him a taste of his own cruelty creating an attitude adjustment in the wife beater. Wife beating became rare, especially in the frontier lands. No police, no court, no jailer required.

I am less afraid of AntiFa, and their violence, than I am the social engineering that the citizenry seems to be accepting with little resistance. Antonio Gramsci is smiling from his grave.

[…] Flopping Aces has the Sunday Funnies (last Sunday’s, check later for this week’s). And this week in radical leftism. […]