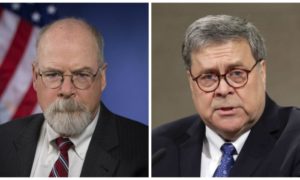 Word comes down today of significant developments in the Barr/Durham investigation of how the Russia hoax was given birth. NBC reported that AG Bill Barr has greatly expanded his investigation and US Attorney John Durham wants to question a number of people in the IC:

WASHINGTON — A review launched by Attorney General William Barr into the origins of the Russia investigation has expanded significantly amid concerns about whether the probe has any legal or factual basis, multiple current and former officials told NBC News.

Durham has also requested to talk to CIA analysts involved in the intelligence assessment of Russia’s activities, prompting some of them to hire lawyers, according to three former CIA officials familiar with the matter. And there is tension between the CIA and the Justice Department.

It is speculated that Durham’s investigation has evolved into a criminal one. Then the report adds something highly significant:

Justice Department officials have said that Durham has found something significant, and that critics should be careful.

Greg Brower, former assistant FBI director for congressional affairs and a former U.S. Attorney, said it’s not normal for a U.S. Attorney to conduct an investigation without an FBI referral of criminal allegations. That’s the role of inspector generals, he said.

We’ve already seen the FBI bury crimes. Not this time. And there’s more good news. The CIA weasels are lawyering up

[Connecticut U.S. Attorney John] Durham has also requested to talk to CIA analysts involved in the intelligence assessment of Russia’s activities, prompting some of them to hire lawyers, according to three former CIA officials familiar with the matter. And there is tension between the CIA and the Justice Department over what classified documents Durham can examine, two people familiar with the matter said.

Isn’t that too bad. And there’s even more good news.

Thanks to  the estimable Sidney Powell,Gen. Michael Flynn’s attorney,  we know that the DOJ had possession of two phones owned by Josef Mifsud.

Lawyers for President Trump’s former national security adviser Michael Flynn claim the Justice Department is in possession of two Blackberry devices used by Joseph Mifsud, the mysterious Maltese professor who allegedly played a central role in the launch of the Trump-Russia investigation.

Sidney Powell, who took over Flynn’s legal defense a couple months ago, asked U.S. District Court Judge Emmet Sullivan, the presiding judge in the D.C. District Court case, to order the Justice Department to produce the “data and metadata” related to the two devices, according to a Tuesday court filing.

The phones were obtained by the Justice Department “very recently,” Powell told the Washington Examiner, adding that Flynn’s defense team requested this information from DOJ prosecutors Brandon Van Grack and Jocelyn Ballantine on Friday by email but have not received it.

And now they are in the hands of John Durham.

Thanks to @GregRubini on Twitter, we know a LOT more about those Blackberrys:

Guess who is connected to HAYLUYT?

This strongly suggests that Josef Mifsud is a Western asset tied heavily to the UK. You will remember that none other than James Comey identified Mifsud as a “Russian agent.”

By contrast, Mueller only went to far as to say Mifsud “had connections to Russia” and “maintained various Russian contacts,” including a with a former employee of the Internet Research Agency, a Russian troll farm that investigators said carried out a social media disinformation campaign to sow discord in the 2016 election.

Yet Mueller chose not to pursue any of it. Devin Nunes was right- none of this made any sense. Mifsud appears to be a British asset.

Keep in mind this from the Strzok/Page album as you consider the report that “Durham has found something significant”:

“White House is running this.”

It is finally getting real. The forecast calls for widely spread liberal whining with local periods of indignation.

It is bizarre. It is bizarre in the United States of America, the world’s foremost constitutional republic, to have to look into a deep state coup against the government. But, that’s where we are, isn’t it?

I hope they are all run through the persecution wringer and bankrupted like General Flynn. Especially Brennan.

Well, we can all say whatever we want. None of our liberal friends are going to show up on THIS one (except maybe AJ to call Dr. J a racist for some random reason).

He might just find out. Hey you know a great attorney he has been on liberal shows hundreds of times that strippers guy. Unless he goes to jail first. How about the former prosecutor who is sure of multiple crimes but not sure which ones, she may be busy losing the primary.

With this trap clamping shut on Dems and Deep State is it any wonder the Dems and Deep State are throwing anything and everything at the wall against Trump, silly as most of it seems?
They have to keep distracting us.
But it looks like it’s not working for them.
Now they are picking and choosing which ones among them must be thrown under the bus.

If conservatives win this war, 100 years from now people will be agog reading the history of today, wondering how a political party could have been so evil and corrupt. If the left wins, no one will care, as they will be too busy struggling for survival.

@Angel: Most of all ignorant. They believed that the American people would tolerate their actions. If charges are filed against the SSIC members, too, this may destroy the Democratic party for decades.

But nothing happens because Graham rules the Judiciary committee and is not doing anything but covering for himself, apparently. No hearings, despite his yapping that he will hold people accountable. Time is running short and Graham is trying to run out the clock. Is he hiding his own involvement in the coup?

@Meremortal: It is our justice dept, the Congress isnt a court cannot sentence anyone. I agree ol Lindsey doesnt have a set.

He maintains that he is waiting for the IG report so as not to be accused of interference.

Thank you, Dr. John. Well done summary and distillation of the foul kettle of fish.