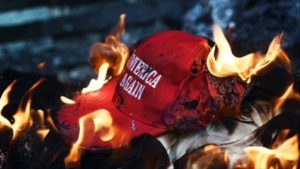 After you read this ask yourself if you saw any of it on the MSM.

Donald Trump held a rally in Minneapolis the other day. There were protests held outside the arena and they provided everyone with a glimpse into how the world would look with firm democrat control. Have a look at how these animals act:

Trump was speaking at a rally in Minneapolis Thursday night after sparring with Mayor Jacob Frey for a week about the high security costs. Protesters turned out in force, with hundreds chanting anti-Trump slogans and waving handmade signs, according to the St. Cloud Times.

As the rally wound to an end and supporters began to flood from the Target Center stadium, demonstrators became more aggressive. Around 9:30 p.m., a video was posted to social media that showed protesters burning red “Make America Great Again” hats in the street. Those at the protest were reportedly calling the police “pigs.”

At one point after the event, a group of demonstrators could be heard chanting, “Nazi scum! Off our streets!” A video shows someone shout, “There’s a Nazi over there,” presumably at a Trump supporter. People are seen running and it appears the man was hit by one of the protesters.

Democrat Antifa anarchists stole/burned #MAGA hats from @POTUS supporters at the #TrumpMinneapolis rally-Patriots must UNITE against this lawless hatred-follow/support eachother as we take our unprecedented movement to the polls 4 a #Trump2020Landslide🇺🇸pic.twitter.com/dgigQfMyrt

Democrat Antifa anarchists stole/burned #MAGA hats from @POTUS supporters at the #TrumpMinneapolis rally-Patriots must UNITE against this lawless hatred-follow/support eachother as we take our unprecedented movement to the polls 4 a #Trump2020Landslide🇺🇸pic.twitter.com/dgigQfMyrt

The situation outside the Trump rally in Minnesota is quickly deteriorating

A protestor can be seen waving the Chinese flag in front of riot police. While people in Hong Kong wave American flags for freedom, we wave Chinese flags pic.twitter.com/XVl551kyqZ

Arrests have been made. Antifa is present. Violence is common place at this point. Typical end of the night anarchy pic.twitter.com/ujnDNQIVtf

Later some were caught throwing stuff at officers and their horses.

A man in a blue jacket seemed to be leaving the Trump rally by himself when he was spotted by a protester who yelled: “There’s a Nazi over here!” A group of protesters then attacked the man, slapping and pushing him. He finally ran away. pic.twitter.com/jzYaWgca9g

As in Portland, San Jose, etc, what happened in Minneapolis last night shows how far-left rioters seek out & chase down outnumbered Trump supporters trying to leave.

These are the future leaders of the democrat party.

And they laughed at Trump for his remarks about a civil war.

Some claim Ilhan Omar was instigating outside the Trum p rally