Schiff plotted with the whistleblower to overthrow Trump 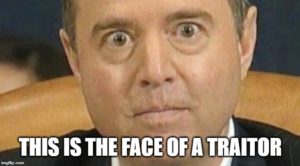 Adam Schiff is a scumbag.

That’s it. There’s no other way to describe him. He is the worst low life dirtbag I can remember since Teddy Kennedy drowning a woman.

It was disclosed today that Schiff knew all about the whistleblower from day one.

WASHINGTON — The Democratic head of the House Intelligence Committee, Representative Adam B. Schiff of California, learned about the outlines of a C.I.A. officer’s concerns that President Trump had abused his power days before the officer filed a whistle-blower complaint, according to a spokesman and current and former American officials.

The early account by the future whistle-blower shows how determined he was to make known his allegations that Mr. Trump asked Ukraine’s government to interfere on his behalf in the 2020 election. It also explains how Mr. Schiff knew to press for the complaint when the Trump administration initially blocked lawmakers from seeing it.

The C.I.A. officer approached a House Intelligence Committee aide with his concerns about Mr. Trump only after he had had a colleague first convey them to the C.I.A.’s top lawyer. Concerned about how that initial avenue for airing his allegations through the C.I.A. was unfolding, the officer then approached the House aide. In both cases, the original accusation was vague.

Schiff says he knew nothing of it in advance

Mr. Schiff never saw any part of the complaint or knew precisely what the whistle-blower would deliver, Mr. Boland said.

I do not believe that lying dog for one second. “Precisely” being the key word. There is no question that Schiff was a participant from beginning. Further, I believe that Schiff knew about this CIA plant and that John Brennan had a hand in this as well.

House Intelligence Rules of Procedure require that ALL members of the committee (including GOP) have access “at all times” to “all papers” and any “other material” received from “any source”. Did Adam Schiff follow this rule or not? https://t.co/XRReVQKgqr pic.twitter.com/pihc7QqEzl

“At no point did the committee review or receive the complaint in advance,” he said. He said the committee received the complaint the night before releasing it publicly last week and noted that came three weeks after the administration was legally mandated to turn it over to Congress. The director of national intelligence, Joseph Maguire, acting on the advice of his top lawyer and the Justice Department, had blocked Mr. Atkinson from turning over the complaint sooner.

“At no point did the committee receive the complaint in advance”

The whistleblower at the center of the House’s impeachment inquiry of President Donald Trump first contacted the staff of the House Intelligence Committee for guidance before sending the complaint to the Trump administration, according to a spokesman and a new report.

The panel’s staff advised the whistleblower to contact the intelligence community inspector general and seek legal counsel but did not receive the complaint in advance, wrote Patrick Boland, a spokesman for House Intelligence Committee Chairman Adam Schiff, in a statement released on Wednesday.

Schiff “learned about the outlines” of the whistleblower’s concerns before the whistleblower filed the complaint, The New York Times first reported. The whistleblower reportedly turned to the House panel only after a colleague brought vague concerns to the CIA’s top lawyer, and became unsatisfied with that path.

This is completely false. The WB did NOT contact the staff of the HCI. He or she contacted Schiff.

Did I mention that Schiff is also a lying POS?

However, in a September 17, 2019 interview with MSNBC, Rep. Schiff said his office had not spoken “directly” with the whistleblower and that the whistleblower had not been advised “by the inspector general or the director of national intelligence (DNI)” on how to communicate with Congress:

“We have not spoken directly with the whistleblower. We would like to. But, I’m sure the whistleblower has concerns that he has not been advised by as the law requires by the inspector general or the director of national intelligence (DNI) just as to how he is to communicate with Congress.

Not to mention the bald face lies Schiff spewed in the hearing:

“We’ve been very good to your country. Very good. No other country has done as much as we have. But you know what? I don’t see much reciprocity here,” Schiff said in interpreting Trump’s remarks.

“I hear what you want. I have a favor I want from you, though, and I’m gonna say this only seven times, so you better listen good. I want you to make up dirt on my political opponent, understand? Lots of it — on this and on that.

I am going out on a limb and suggest that it was John Brennan who tasked the CIA agent to the White House.

I don’t know who ratted Schiff out, but whoever did it deserves a medal.