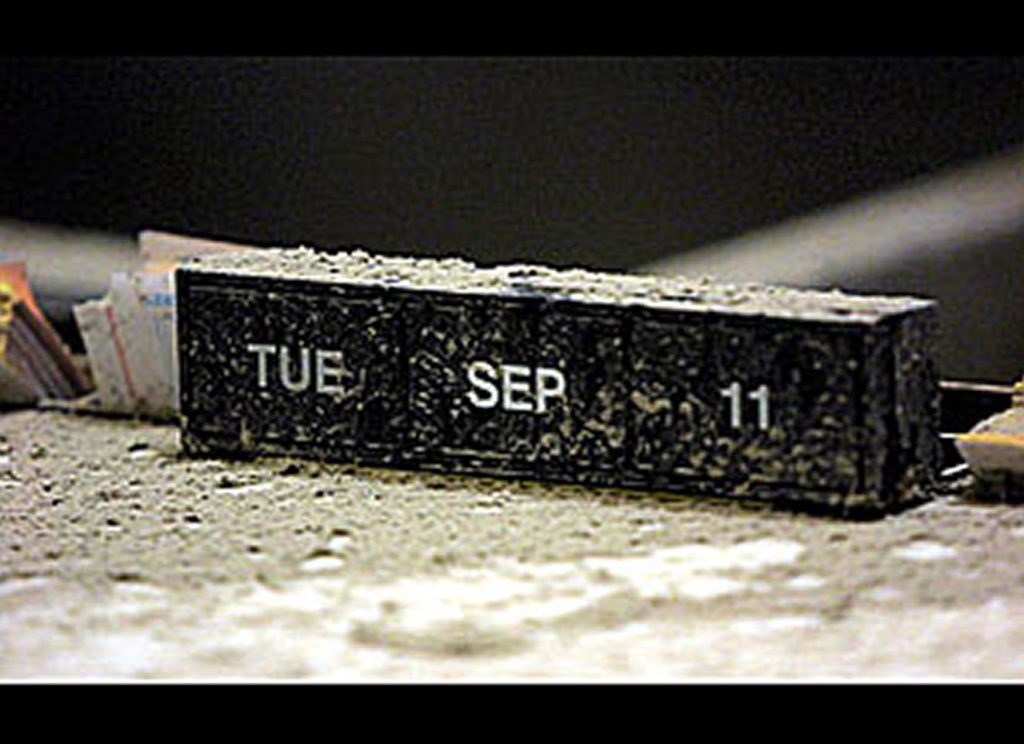 It’s strange to know young adults now, who have no personal recollection of the 9/11 attacks.  Even stranger still to know people who lived that day and seem to have “moved on”, without interest to look back and reflect. 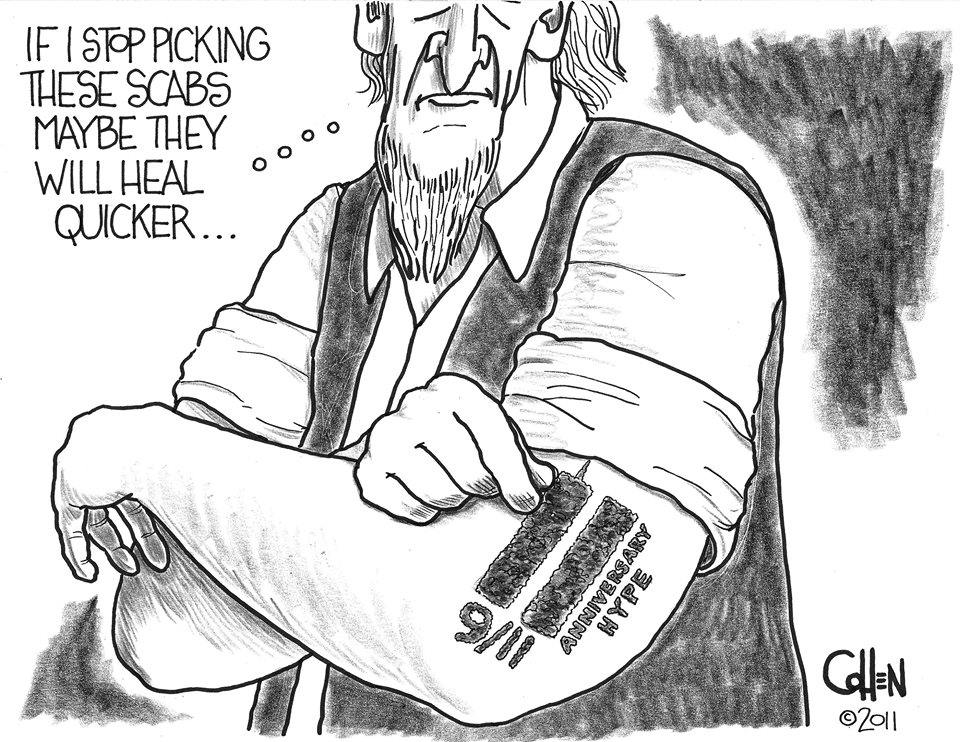 What is aggravating are those growing number of Americans (and non-Americans) giving in to conspiracy theories.  I see it in every comment stream on news sites that bring up 9/11.  Building 7.  Jet fuel.  Inside job.  Controlled demolitions.  28 redacted pages.  So many nutjobs living amongst us.  Idiots!

It’s also quite sad how political differences have torn us asunder to the point that it feels as though our diversity is no longer a strength, but a weakness.  The division is so palpable.  The rift so wide that it feels like we are two nations living within one.

I hope it does not take another traumatic attack to bring us together as brothers and sisters and one nation.

Nearly every American above a certain age remembers precisely where they were on September 11, 2001. But for a tiny handful of people, those memories touch American presidential history. Shortly after the attacks began, the most powerful man in the world, who had been informed of the World Trade Center explosions in a Florida classroom, was escorted to a runway and sent to the safest place his handlers could think of: the open sky.

For the next eight hours, with American airspace completely cleared of jets, a single blue-and-white Boeing 747, tail number 29000—filled with about 65 passengers, crew and press, and the 43rd president, George W. Bush, as well as 70 box lunches and 25 pounds of bananas—traversed the eastern United States. On board, President Bush and his aides argued about two competing interests—the need to return to Washington and reassure a nation and the competing need to protect the commander in chief. All the while, he and his staff grappled with the aftermath of the worst attack on American soil in their lifetimes, making crucial decisions with only flickering information about the attacks unfolding below. Bush struggled even to contact his family and to reach Vice President Dick Cheney in the White House bunker.

The story of those remarkable hours—and the thoughts and emotions of those aboard—isolated eight miles above America, escorted by three F-16 fighters, flying just below the speed of sound, has never been comprehensively told.

This oral history, based on more than 40 hours of original interviews with more than two dozen of the passengers, crew and press aboard—including many who have never spoken publicly about what they witnessed that day—traces the story of how an untested president, a sidearm-carrying general, top aides, the Secret Service and the Cipro-wielding White House physician, as well as five reporters, four radio operators, three pilots, two congressmen and a stenographer responded to 9/11.

Go to Politico to read the rest.

18 YEARS AFTER THE 9/11 ATTACKS, WHAT IS THE CURRENT STATE OF AL-QAEDA?

Eighteen years after the al-Qaeda terrorist attacks of September 11, 2001, the group has evolved significantly and looks much different today than it did nearly two decades ago. Osama bin Laden was killed in May 2011 and the group has been led since then by Ayman al-Zawahiri. Bin Laden’s long-time former deputy has overseen a tumultuous period for al-Qaeda, from the rise of the so-called Islamic State to the more recent death of Osama’s son and heir apparent, Hamza bin Laden, whose death was recently revealed following a U.S. attack that occurred at some point over the past several years. Zawahiri has led the group’s expansion, establishing relationships with al-Shabaab in Somalia, Jabhat al-Nusra in Syria and al-Qaeda in the Indian Subcontinent (AQIS) in South Asia.

The influence of al-Qaeda core and its senior leadership hiding in Pakistan has been reduced, while franchise groups have grown in prominence, including that of Al-Qaeda in the Arabian Peninsula (AQAP), Al-Qaeda in the Islamic Maghreb (AQIM) and its various offshoots operating throughout the Sahel, AQIS, al-Shabaab, and Hurras al-Deen (HAD), al-Qaeda’s representative in Syria. In many ways, AQAP has proven itself as the model for how al-Qaeda wants its affiliates to function. Once it was in control of territory, AQAP launched public works projects in the areas under its control, including refurbishing water wells and fixing damaged infrastructure, while also providing basic necessities to the poorest citizens. AQAP has also managed to cut deals with nation-states, including the United Arab Emirates, which has been accused of colluding with the militants in Yemen’s civil war. Bahrain also reportedly cooperated with al-Qaeda militants to target Shia dissidents in that country, making it clear that in some parts of the world, governments and security services still view the terrorist group as a viable partner in certain situations.

Al-Qaeda boasts more than 40,000 members worldwide today and relies on the ideology of ‘bin Ladenism’ and internecine sectarianism to recruit new members. And while this expansion covered territory stretching from the Horn of Africa to South Asia, the story of post-bin-Laden al-Qaeda has primarily been driven by the group’s attempt to remain relevant in Syria and its competition with the Islamic State. Al-Qaeda has consistently attempted to portray itself throughout the Middle East as the moderate alternative to the Islamic State, and in many ways, this image makeover has been successful—al-Qaeda-linked groups have secured direct and indirect state support in both Yemen and Syria. In both its propaganda and internal communications, al-Qaeda has warned against failing to heed essential lessons from failed jihadist campaigns in Algeria and Iraq, where draconian measures alienated local populations. Following the Arab Spring, bin Laden instructed his organization to take advantage of the opportunity to focus on grassroots organization and cultivating relationship with local groups.

Over the past several years, al-Qaeda leadership has released a steady stream of messages that reiterated the importance of the group’s global struggle and urged its followers to launch strikes against the West, especially the United States. Less than two weeks ago, the United States launched strikes against al-Qaeda leaders in northwest Syria, targeting training camps in rebel-controlled Idlib Province. United States Central Command (USCENTCOM) released a statement that said the attacks were targeting al-Qaeda militants ‘ responsible for attacks threatening U.S. citizens, partners, and innocent civilians.’ In Congressional testimony last year, former Director of National Intelligence (DNI) Dan Coats warned that al-Qaeda would continue to ‘direct and enable plots against targets in Europe’ which would remain vulnerable to terrorist attacks, potentially engineered in Syria. A recent study by the United Nations assessed al-Qaeda’s links to groups in Syria and concluded that Hurras al-Deen maintained an ‘international outlook,’ suggesting the group’s interests in operating beyond the Syrian theatre. What this demonstrates is the ever-changing nature of the threat posed by al-Qaeda, once a group based in Afghanistan and now a decentralized, yet incredibly resilient global network with new affiliates capable of conducting external operations and spectacular attacks.

The war on terror won’t end until all the terrorists have been killed. That means it will never end.

The rift so wide that it feels like we are two nations living within one.

Sorry to say, that is the case. Think about this, during Antebellum America and the CW both sides could agree on something as basic as how many genders there are. Now we can’t even agree on that.

I hope it does not take another traumatic attack to bring us together as brothers and sisters and one nation.

Not to sound too pessimistic, but after 9/11 the “unity” was gone in about three months and we are far more divided now than we were then. That is compounded by the fact that segments of our youth are detached from reality and are being taught in schools and on social media that America sucks.

Nowadays that very true statement will get you labeled as “racist”, “Islamophobic”, or “Xenophobic”.

Excellent update on AQ. You haven’t lost your touch with the intel research type stuff!

Not correct. They have always been at war with us. The date of September 11 was not randomly chosen. It was representative of a battle lost. To radical Islam, September 11, 2001 was only the restarting of a war that had been put on hold for 318 years. The battle was simply moved from the Old World to the New World (the great Satan).

And this is not a war that will be won in one generation. It will be a threat to many generations of Americans, and everyone else in nations that are considered “Christian”, i.e. the infidel. Life has no meaning to jihadists, they don’t care how many of their numbers are struck down. The mullahs will make sure that reinforcements are being trained from the moment of birth and when hate is trained from birth, it is almost impossible to stomp out.

Yet, in our own nation, rags like the NYTs credits “airplanes” with murdering over 2,000 people in New York and many more in D.C. and people like Ilhan Omar said “some people did something” on 9-11. With that one comment, jihadist supporting Omar should have been run out of office. Rashid Tlaib wraps herself in the Palestinian flag on the night of her election. So much for their patriotism and support for our nation. Yet the left will spew their filth on how Muslims are oppressed in America while hate crimes against Jews continue to climb.

It has been forgotten already. Just take a look at the “New” Democratic Party.

what the millenniums, snowflakes and libs does not understand, this was a terrorist attack on America. let not one forget that the predator islam is at your door every night and day. schools are rich targets for the inexperienced and growing terrorist groups-inexpensive, great press coverage, and the libs endorsement as warriors. the war on terrorism will never end. the date 9/11 was the day the ottoman empire was stopped at the Siege of Vienna in 1683. siege began in July 17th and ended the 12th. the 11th was the final push to take the city.

“The war on terror won’t end until all the terrorists/muslims have been killed. That means it will never end.” FIFY